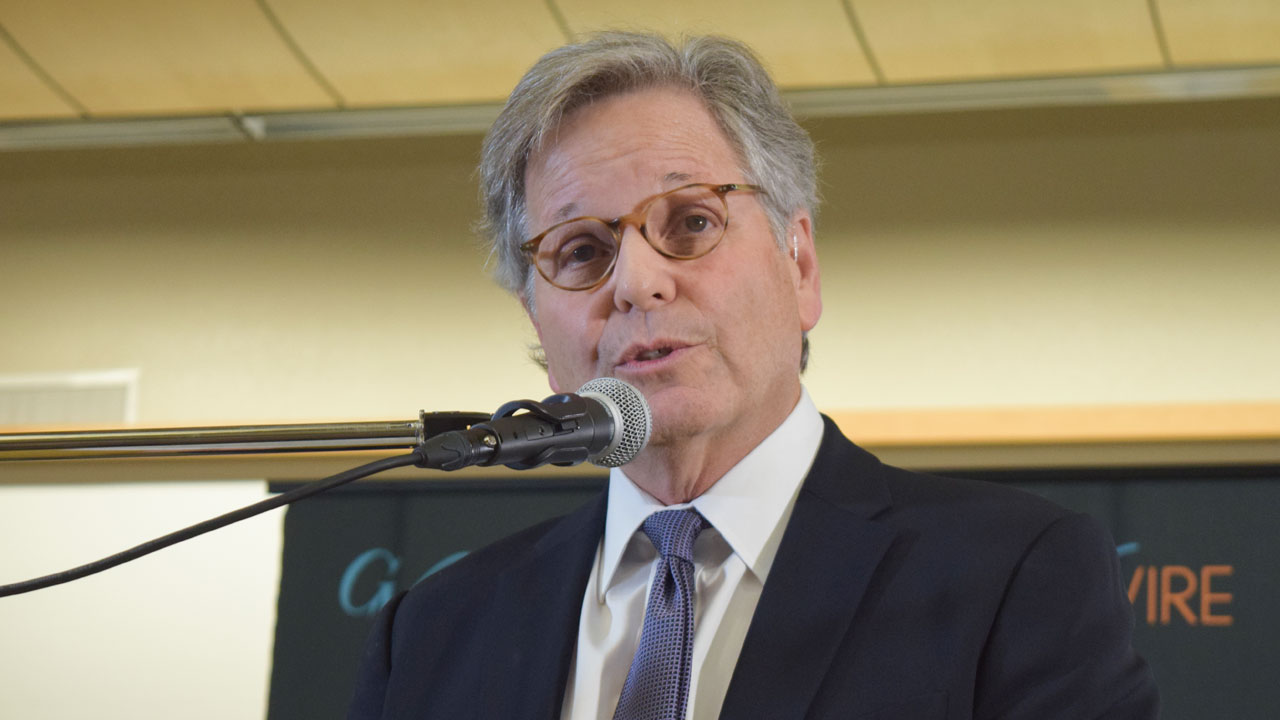 The two-state solution is the only way to guarantee a peaceful resolution to the Israeli-Palestinian conflict, but it will take strong leaders who are willing to compromise, a Southern California rabbi said Dec. 9 at Clovis Community College.

“The opposite of compromise is not pride or integrity or idealism. The opposite of compromise is fanaticism and death.” — Rabbi John Rosove, quoting Israeli peace activist Amos Oz
But Rabbi John Rosove said the idea of compromise is abhorrent to many Israelis, Palestinians, other Arabs, and Americans who seem determined not to give an inch about issues such as Israeli-occupied land in the West Bank or Israel’s very right to exist. Without compromise, Rosove said, he holds out little hope of seeing an end to the conflict embroiling the region for generations.
Rosove described himself as “pro-Israel and anti-occupation” — which he said puts him at odds with many Israelis and Jewish Americans who advocate for the so-called “one-state solution.” Under some one-state scenarios, Palestinians would be denied full citizenship in Israel.
“The one-state solution is a guarantor to more war, to the destruction of Zionism and the Jewish state,” he told GV Wire prior to his presentation.
Rosove’s appearance at the northeast Fresno college campus, which drew an audience of more than 100 people, was hosted by GV Wire as part of an ongoing lecture series.

Rosove, who is rabbi emeritus of Temple Israel of Hollywood, a leader in the Reform Zionist community and author of the forthcoming book, “Why Israel (and its Future) Matters,” acknowledged that his invitation to speak at the college was largely in response to a controversial presentation in September by author/journalist Alison Weir. Her criticisms of Israel and U.S. support for the Jewish state, and her support of Palestinians, had sparked calls for her lecture to be canceled.
Weir’s discussion of the Israeli-Palestinian conflict was “truncated … and inaccurate” and reflected her pro-Palestinian, anti-Israel viewpoint, Rosove said.

At Monday’s lecture, Rosove outlined the history of Zionism, the creation of Israel, the many failed attempts to negotiate peace between Israel, its Arab neighbors, and the Palestinians, the occupation of the West Bank, isolation of the Gaza Strip, and the continuing murders of Israeli civilians by suicide bombers, rockets, bus bombs, and other weaponry.
Rosove explained that some on the far right believe that the nation is entitled not only to the land claimed when the state of Israel was declared in 1948, but also to Jewish lands from Biblical times.
He quoted from Amos Oz, an Israeli author and peace activist who died a year ago: “There are many people who loathe the very idea of compromise, viewing any concession as weakness, as pitiful surrender. Whereas I think that in the lives of families, neighbors and nations, choosing to compromise is in fact choosing life. The opposite of compromise is not pride or integrity or idealism. The opposite of compromise is fanaticism and death.”


“Everyone has a legitimate narrative. But the way things are need not be the way they continue.”  — A tour group member quoted by Rabbi Rosove
Rosove has been active with J Street, a Washington, D.C.-based advocacy organization that supports the two-state solution to the Israeli-Palestinian conflict. He noted that J Street’s advocacy helped win passage of House Resolution 326 that expresses support for the two-state solution.
He related how he would periodically take tour groups to Israel and Palestine where they met leaders, scholars, journalists, and activists from both sides. After one of his tours, the group asked for time to process the confusing and conflicting viewpoints they had been exposed to.

‘Everybody Has A Legitimate Narrative’

Rosove recalled that one man on the tour seemed to sum up the dilemma when he said, “You know, everyone is right — and that’s the rub. Everyone has a legitimate narrative. But the way things are need not be the way they continue.”
After his speech, Rosove answered questions from the audience, including several about the BDS Movement, which seeks to end international support for Israel through boycotts, divestment, and sanctions: “I’m against the BDS Movement. … I respect nonviolent protests. But BDS is at its core an anti-Semitic movement. The Palestinian origins of it, it’s really not just about the West Bank, but all of Israel being destroyed.”
As to whether the BDS Movement is similar to the boycott and divestment efforts that helped end apartheid in South Africa, Rosove said: “I don’t think it would be effective, that’s my main concern. … BDS worked in South Africa. I don’t think it would work in Israel.
“Israel has economic relations with countries all over the world, it’s very enmeshed. With biotech, high tech, and cybertech, and everything else that they’re doing, it’s very much enmeshed in western civilization. So in that respect, Israel is not going to be affected by boycotts.” 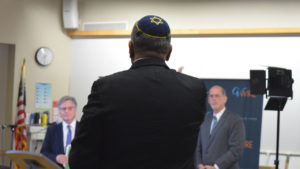 As the lecture was drawing to a close, Rabbi Amnon Shor stood and insisted on asking several questions that he had submitted. Shor is rabbi of the Bet Shalom Messianic Congregation of Fresno, a sect that believes Jesus Christ is the Messiah of Israel.
Shor, a native of Israel, asked Rosove for his view of the Biblical promise from God to Abraham, Isaac, and Jacob that the land of Israel belongs to the Jewish people, in light of today’s political landscape.
“The Biblical land extends as far as Iraq, and it’s a very, very big land,” Rosove said. “Obviously I have a connection to Eretz Israel (Biblical Israel). I feel at home there in a way that I do not feel at home here. But also I’m a pragmatist. As Amos Oz said so articulately … ”
Shor interrupted Rosove, saying, “You should call him a fanatic liberal, as you called us fanatic right-wingers.”

Shor then asked Rosove if anyone has ever found historical or archeological proof of a Palestinian kingdom or state in the Mideast, to which Rosove responded, “You know the answer to that question. The answer is no.”
In modern times, many nation-states have emerged “out of roots of culture and peoplehood,” Rosove said, but stopped when he again was interrupted by Shor.
Shor said his family lived in Israel for generations and fought in the nation’s many wars. “With all due respect, do not lecture us to give a land that is biblically and Godly ours,” he said as other audience members applauded loudly.