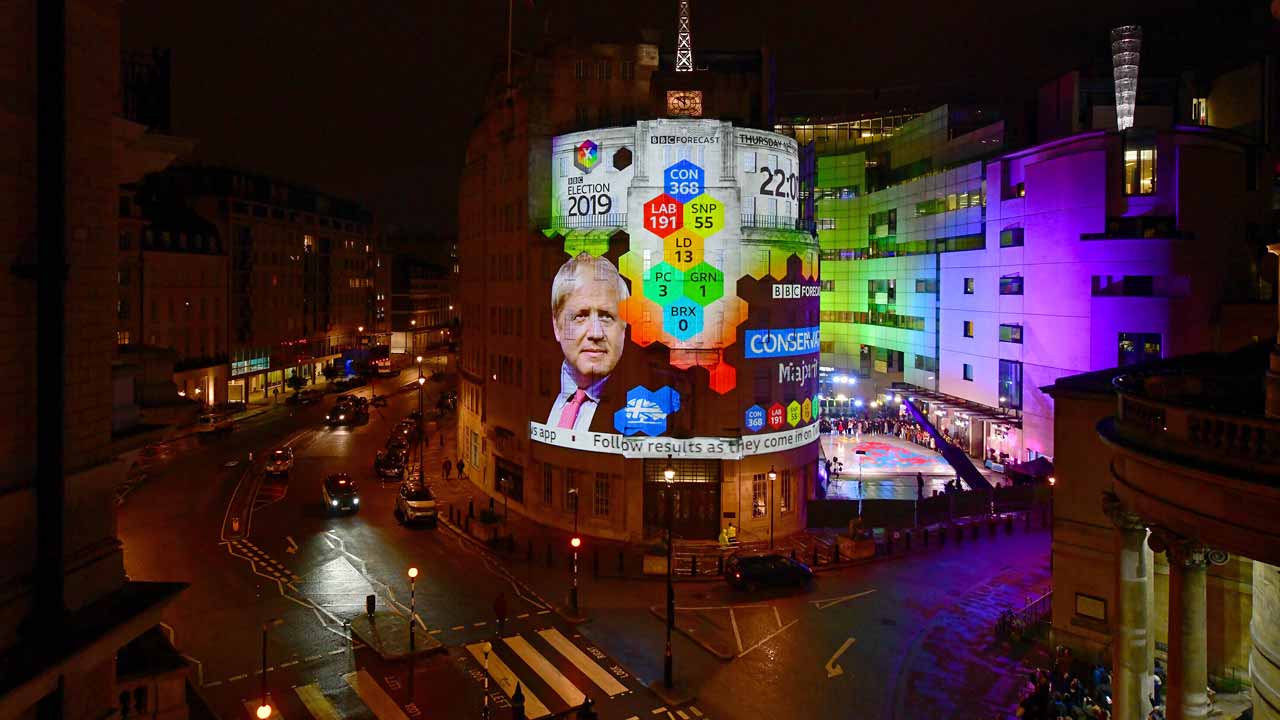 LONDON — Prime Minister Boris Johnson’s Conservative Party is likely to win a solid majority of seats in Parliament, an exit poll suggested late Thursday — an decisive outcome to a Brexit-dominated election that should allow Johnson to fulfill his plan to take the U.K. out of the European Union next month.
It would also make Johnson the most electorally successful Conservative leader since Margaret Thatcher, another politician who was loved and loathed in almost equal measure.

The survey, released just after polls closed, predicted the Conservatives would get 368 of the 650 House of Commons seats and the Labour Party 191. That would be the biggest Tory majority since Thatcher’s 1980s’ heyday, and Labour’s lowest number of seats since 1935.
That result would be a triumph for Johnson and a disaster for left-wing Labour leader Jeremy Corbyn, who faced immediate calls for his resignation.
Based on interviews with voters leaving 144 polling stations across the country, the poll is conducted for a consortium of U.K. broadcasters and is regarded as a reliable, though not exact, indicator of the likely result. The poll also projected 55 seats for the Scottish National Party and 13 for the Liberal Democrats.
Ballots are being counted, with official results expected early Friday.

A decisive Conservative win would vindicate Johnson’s decision to press for Thursday’s early election, which was held nearly two years ahead of schedule. He said that if the Conservatives won a majority, he would get Parliament to ratify his Brexit divorce deal and take the U.K. out of the EU by the current Jan. 31 deadline.
The poll suggests that message had strong appeal for Brexit-supporting voters, who turned away from Labour in the party’s traditional heartlands and embraced Johnson’s promise that the Conservatives would “get Brexit done.”
“I think Brexit has dominated, it has dominated everything by the looks of it,” said Labour economy spokesman John McDonnell. “We thought other issues could cut through and there would be a wider debate, from this evidence there clearly wasn’t.”
Johnson did not mention the exit poll as he thanked voters in a tweet. “Thank you to everyone across our great country who voted, who volunteered, who stood as candidate,” he said. “We live in the greatest democracy in the world.”
Conservative Party chairman James Cleverly said he was cautious about the poll, but that if substantiated it would give the party “a big majority” that could be used to “get Brexit done.”

The pound surged on the exit poll’s forecast, jumping over two cents against the dollar, to $1.3445, the highest in more than a year and a half. Many investors hope a Conservative win will speed up the Brexit process and ease, at least in the short term, some of the uncertainty that has corroded business confidence since the 2016 vote.
Many voters casting ballots on Thursday hoped the election might finally find a way out of the Brexit stalemate in this deeply divided nation.
On a dank, gray day with outbreaks of blustery rain, voters went to polling stations in schools, community centers, pubs and town halls after a bad-tempered five-week campaign rife with mudslinging and misinformation.
Opinion polls had given the Conservatives a steady lead, but the result was considered hard to predict, because the issue of Brexit cuts across traditional party loyalties.
Three and a half years after the U.K. voted by 52%-48% to leave the EU, Britons remain split over whether to leave the 28-nation bloc, and lawmakers have proved incapable of agreeing on departure terms.

Johnson pushed for the early election — Britain’s first December vote since 1923 — to try to break the political logjam. He campaigned relentlessly on a promise to “Get Brexit done” by getting Parliament to ratify his “oven-ready” divorce deal with the EU and take Britain out of the bloc as scheduled on Jan. 31.
That would fulfill the decision of the 2016 referendum, and start a new phase of negotiations on future relations between Britain and the 27 remaining EU members.
The Conservatives focused much of their energy on trying to win in a “red wall” of working-class towns in central and northern England that have elected Labour lawmakers for decades but also voted strongly in 2016 to leave the EU. That effort got a boost when the Brexit Party led by Nigel Farage decided at the last minute not to contest 317 Conservative-held seats to avoid splitting the pro-Brexit vote.
Labour, which is largely but ambiguously pro-EU, faced competition for anti-Brexit voters from the centrist Liberal Democrats, Scottish and Welsh nationalist parties, and the Greens.
On Brexit, the opposition party said it would negotiate a new divorce deal with the EU and then offer voters the choice of leaving the 28-nation bloc on those terms or remaining.

But on the whole Labour tried to focus the campaign away from Brexit and onto its radical domestic agenda, vowing to tax the rich, nationalize industries such as railroads and water companies and give everyone in the country free internet access. It campaigned heavily on the future of the National Health Service, a deeply respected institution that has struggled to meet rising demand after nine years of austerity under Conservative-led governments.
One of the campaign’s defining images was a photo of a sick 4-year-old boy sleeping on a hospital floor because no beds were available. Johnson’s initial failure to even look at the photo in an on-camera interview put him on the defensive, portraying him as being insensitive to the child’s plight. The photo swept across social media like a firestorm, injecting an explosive jolt into the political war of information in the final days of the campaign.
But if the exit poll is correct, it wasn’t enough to boost Labour’s fortunes. Defeat could spell the end for Corbyn, a veteran socialist who moved his party sharply to the left after taking the helm in 2015, but who now looks to have led his left-of-center party to two electoral defeats since 2017.
“It’s Corbyn,” said former Labour Cabinet minister Alan Johnson, when asked about the poor result. “We knew he was incapable of leading, we knew he was worse than useless at all the qualities you need to lead a political party.”

Unpalatable Choice for Many Voters

For many voters, the election offered an unpalatable choice. Both Johnson and Corbyn have personal approval ratings in negative territory, and both have been dogged by questions about their character.
Corbyn has been accused of allowing anti-Semitism to spread within the party. The 70-year-old left-winger was portrayed by opponents as an aging Marxist with unsavory past associations with Hamas and the IRA.
Johnson has been confronted with past broken promises, untruths and offensive statements, from calling the children of single mothers “ignorant, aggressive and illegitimate” to comparing Muslim women who wear face-covering veils to “letter boxes.”
Yet, his energy and determination proved persuasive to many voters.
In Uxbridge, the suburban London seat that Johnson represents in Parliament, Stefan Hay said he was voting for the prime minister despite his flaws.
“At the end of the day, whether you like him or not, with all of his eccentricities, I think he has leadership ability and I think he is the best man for the job, simple as that,” Hay said. “The alternative would be excruciating.”