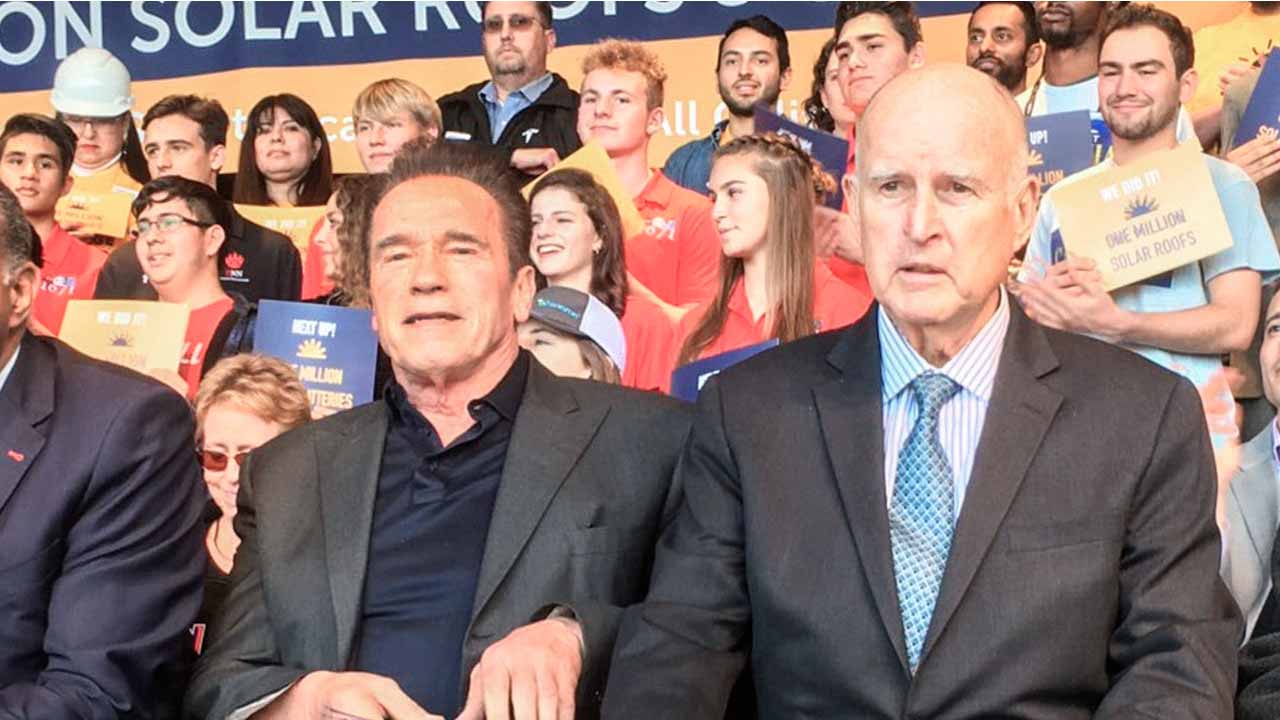 “The Terminator” shared the stage with his successor, former Gov. Jerry Brown, in an event noting the 1 millionth solar panel installation since the passage of a 2006 law creating incentives. Both got a memento from a coalition of solar and environmental advocates.
Arnold received a giant panel for the millionth installed. Brown received a smaller one, representing one of the first panels made by ARCO in 1978.
The event, in front of hundreds of school kids on a sunny day in the outdoor venue, was an environmental rally. Before, during, and after the event, the kids clamored around the movie star, whose first “Terminator” movie was made before they were even born. Even “Terminator 2: Judgment Day” was made before they were born.
No worries. “Terminator: Dark Fate,” the latest in the franchise, plays at the Clovis 8 on Friday.

The two former governors lavished praise on the career technical program at the school, which they toured before the rally.
“I’ve never seen a robot at a school before,” Brown told the audience. “If you can make a robot, you can make a better world.”
Schwarzenegger wondered if his prior movie roles were the inspiration.
“Is this because I played a robot in one of my movies? I don’t know the reason for all these robots all of the sudden!?” Schwarzenegger said.

Speaking after the event, Schwarzenegger called transportation the next big environmental issue.
“This is the only area where California is still not doing a good enough job. I’m not proud of our job … because we are not really in charge ourselves,” he said.
He was referring to the ongoing battle between the state and the Trump administration over mileage standards. Schwarzenegger called for more incentives to buy electric and hydrogen-powered cars. The state could pay for it from cap-and-trade funds, he suggested.

Starting next year, the state will mandate solar panels on new homes. Meanwhile, the building industry says this may add up to $10,000 to the price of a new home.


“In 1974, Clovis was nothing. Now, you got robots. You got solar energy!” — former Gov. Jerry Brown
Do those goals conflict with the need to build more affordable housing? Brown says no.
“The state has to assist those of low income with the resources necessary. Look, climate change is going to wreak havoc on the lives of poor people. We have to keep going in our solar roofs and renewable energy. You got to get to net-zero carbon emissions. People need help. The government’s got to do it.”

Brown appeared to enjoy the event, cracking jokes even as he made serious points.
In fact, when talking about the benefits of high-speed rail, Brown took a shot of his 81-year old self.
“It’s really good for old people like me. We shouldn’t be allowed behind the wheel. Because we get distracted. We’re always thinking about things in the past,” Brown said to laughter.

Do You Really Know the Bill of Rights? Take This Quiz.