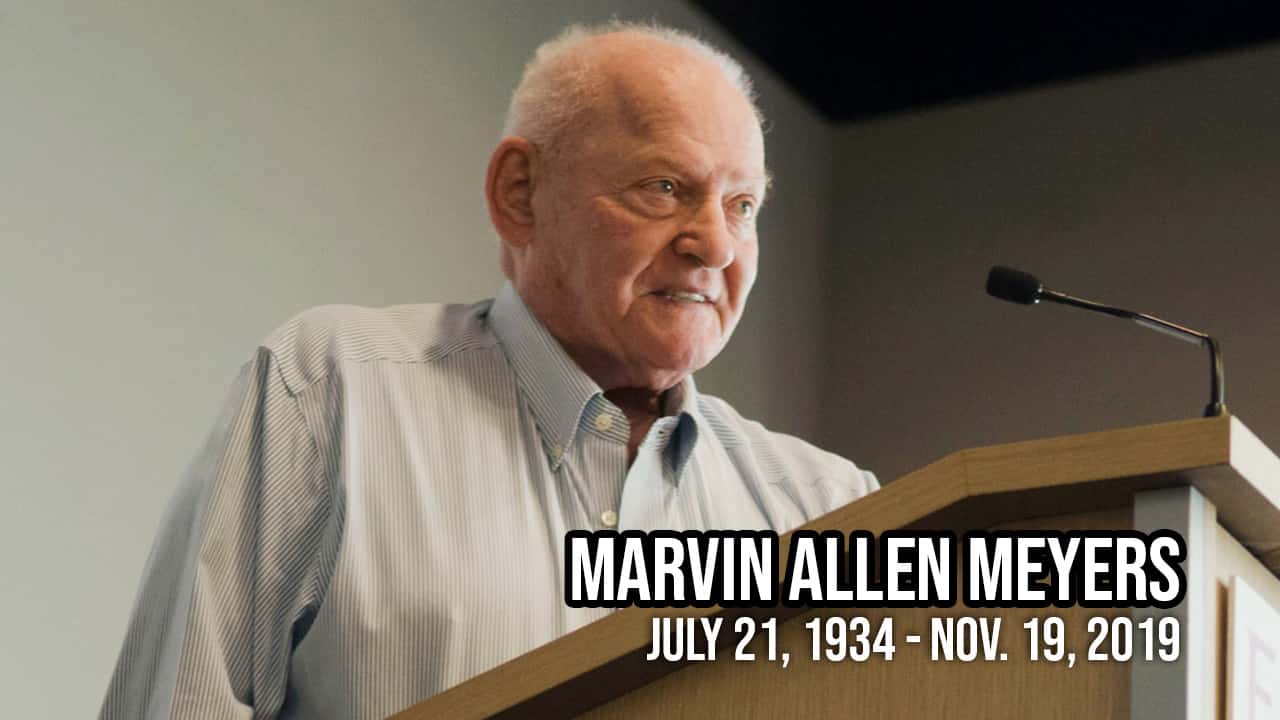 California agriculture lost a legend and Valley students — from kindergarten to graduate school — lost one of their best friends when Marvin Allen Meyers died two weeks ago at 85.
He was a farmer, philanthropist, and innovator who transformed 2,600 acres west of Mendota into California’s first privately funded water bank, restored wetlands, and a real-world classroom.

Listen to this article:
Call him an educator, too.

Meyers shirked the spotlight but was generous with his time, treasure, and encouraging words.
The last time I saw him was about two years ago at the groundbreaking for the $7.5 million Career Technical Education Charter School in southeast Fresno.
“This is an opportunity for kids to learn, get hands-on experience and get a trade,” Meyers told me that day. “When Jim (Yovino) told me about what he was trying to do, I had to support it.”
Though the fact wasn’t revealed at the event, Meyers and his wife, Tish — whom he met on a blind date in 1970 — enabled the cutting-edge CTE school to move forward by donating $1 million.


“When somebody shakes your hand and says I’m going to do this. That was Marvin. It’s hard to find people like that.” — Fresno County Superintendent of Schools Jim Yovino
Yovino is the Fresno County Superintendent of Schools. He recalled a conversation with Meyers when the school was in the planning stages.
“He told me, ‘I want it to be right for kids. I don’t want anything to stand in the way of kids getting what they need.’ ”

Though the Meyers family has donated to education at every level, Marvin was especially passionate about Fresno State, his alma mater.
“Oh, Lord, he loved his Bulldogs,” Yovino says.
Meyers closely followed and supported Fresno State sports teams and, in 2013, the university opened the $6 million Meyers Family Medicine Center. The center provides student-athletes with preventative medicine, nutritional counseling, physician examinations, injury treatment, on-site x-rays, and rehabilitation services.
“I join the Meyers family and numerous people at Fresno State in mourning the loss of Marvin Meyers.  Marvin was a dear friend to Mary and me and a visionary agricultural leader who was passionate about all things Fresno State,” Fresno State President Joseph I. Castro said in a statement.
“He was instrumental in resurrecting the Fresno State student livestock judging team by being the first donor to support this effort. Because of his commitment to the program and its students, our team was renamed the Meyers Livestock Judging Team in his honor.
“His Bulldog spirit was legendary and he cared so deeply for our student-athletes that he and his family were the generous lead donors for the Meyers Family Sports Medicine Center. Marvin truly was, and will always be, a Top Dog.”

To say that Meyers lived an interesting life is an understatement.
Born in Los Angeles, he headed to Fresno State after junior college, Meyers said, “because I wanted to get out of the LA area and pursue my degree in agriculture.”
After graduating from Fresno State with a degree in animal science, he was drafted by the Army in 1957. En route to a unit in South Korea, he literally was pulled off the boat and, because of his schooling, sent to Walter Reed hospital, where he worked with chimpanzees for the U.S. Space Program. Later, the Army shipped him to the Nevada Proving Grounds to participate in radiation studies.

His first job after his Army discharge?
Helping build the first chairlift at China Peak. He later worked for Swift & Co. meatpackers in St. Lous. There, he said, “I learned how to buy land.”
That training would prove beneficial in helping Meyers purchase west side land for his farming operation, which was partially financed by the sale of his business, Meyers Ag Chem.
Ryan Jacobsen, CEO of the Fresno County Farm Bureau, says that Meyers “definitely was a visionary on water. He not only saw what was coming decades before other people did, he acted on it.”
That action produced the Meyer Water Bank, the first of its kind in California.
“Most people would have given up on it, but he stuck with it, and his family is better off for it,” says Jacobsen.

Educating Students About Water and Wildlife

The water bank and wetlands restoration projects benefited students from throughout the state.
Thousands visited every year free of charge and received an education in water, farming, and wildlife.
“It’s not just a field trip,” Meyers said. “It’s a learning experience. That’s what I get excited about.”
Yovino recounts the day a busload of students from Fresno was visiting the water bank. They knew next to nothing about life on a farm. When word came that a calf was about to be born a few miles away, he stopped everything, directed the students back on the bus, and they headed to the birth.
“He was just so excited that the kids were there to see it,” Yovino said. “To see life unfold before their eyes.”

Contributions to the Community

Meyers’ generosity and enthusiasm for lifting up the Valley touched many.
Having obtained the rank of Eagle Scout in his youth, he maintained a lifelong connection to the Boy Scouts and Girl Scout, including support of the Scout Island Education Center on the San Joaquin River. He donated to Valley Children’s Hospital, ValleyPBS, and other nonprofits.
In addition to serving as president of the San Luis Water District, he was a member of Gov. Arnold Schwarzenegger’s ag advisory commission.
“Marvin was a legend not just of the Valley but throughout the state,” Jacobsen says.
Yovino describes Meyers as one of the last of a generation “our community is going to miss.”
Said Yovino: “When somebody shakes your hand and says I’m going to do this. That was Marvin. It’s hard to find people like that.”

Meyers is survived by his wife, Tish Meyers; his children, Greg Meyers, Brooke Hamilton, and her husband Brooke; Cheryl Reinhardt and her husband Gary; grandchildren, Trevor Meyers, Sierra Meyers, Mikenzi Meyers, Ryan Hamilton, Grant Hamilton, and Jessica Rubin; his sister, Linda Clayton, and her husband Jeff and their three children.
A private family service was held.
Remembrances may be made to the Valley Children’s Survivor Program, Valley Animal Center, or Assistance League of Fresno.

For Banks, Data on Your Spending Habits Could Be a Gold Mine