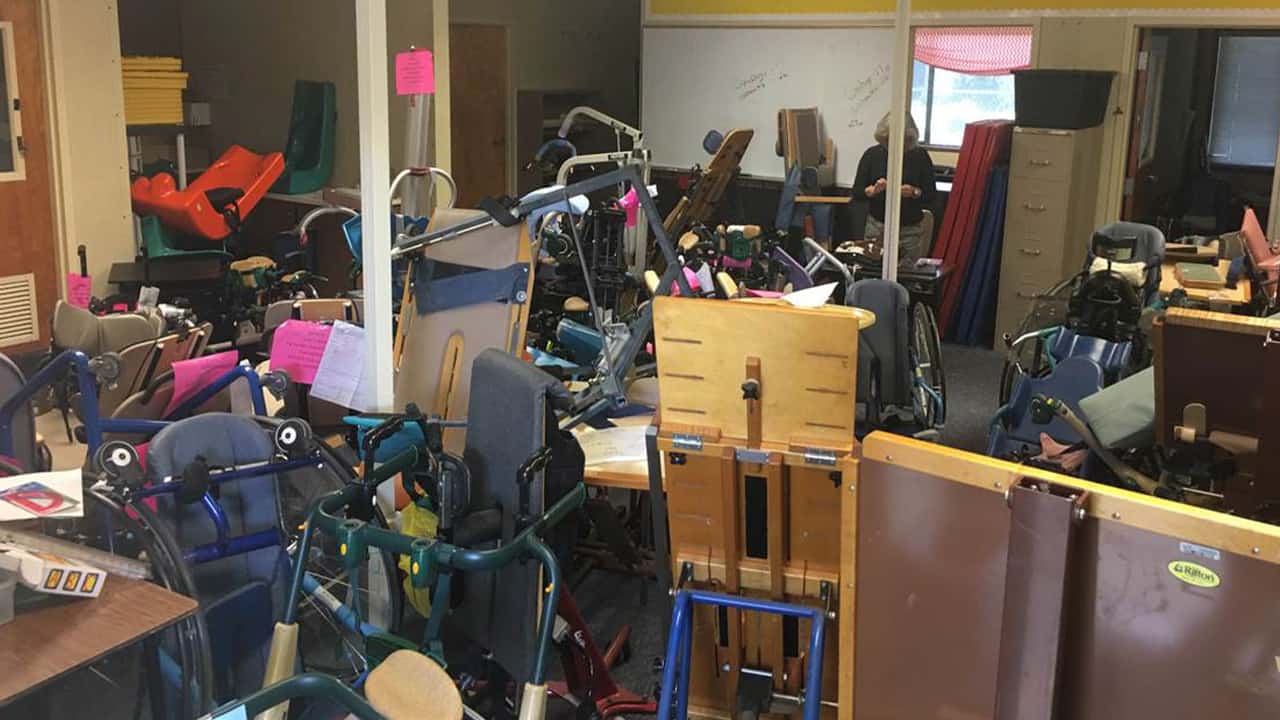 Some of the photos accompanying this column make me wonder if Fresno Unified will ever get its act together.

As you can see, the conditions in this special education storage room and teachers’ office at Figarden Elementary School are appalling. Rat feces and urine are in the room. Weird stuff, possibly mold, is on the walls — likely the result of a leaking air-conditioning unit. And equipment, much of it outdated, is crammed and stacked in a manner that would give the fire marshal a heart attack.
Three traveling teachers — all orthopedic impairment specialists — work in this room. If you’re thinking, thank goodness the students aren’t in there, consider this: Rats have been having a picnic on some of the students’ special chairs.
The good news is, school custodians and teachers cleaned up the room Saturday and removed the old equipment. They did so only after donning respirator masks.
“But it still stinks in there,” a teacher told me Wednesday afternoon. There’s also good news from the other side of town. The district has cleaned up similar unsanitary conditions at a special-ed room at Sunnyside High School after being alerted by teachers at a board meeting.

Not knowing that the room at Figarden had been recently sanitized, I showed the “before” pictures, which were taken Nov. 4, to Superintendent Bob Nelson on Wednesday morning. I wanted his reaction.
I expected outrage, a vow to get to the bottom of the disgusting mess, and a promise to hold those in charge accountable.


On one occasion, the teacher said, a special-ed manager heard her concerns and responded, “Oh, yeah, that’s a nasty room.”
Instead, he responded in measured tones and with the frustration of a leader whose job is far less about education, but more about putting out multiple fires that seemingly ignite daily in California’s third-largest school district.
“I don’t know how any adult in our system can walk into that room and think that’s OK,” Nelson said. “At some point, this became normalized. That’s disappointing, and it’s unacceptable.” A special-ed teacher who has worked in the room said that complaints repeatedly were made to the principal and to special-ed managers about the rat problem.
On one occasion, the teacher said, a special-ed manager heard the concerns and responded, “Oh, yeah, that’s a nasty room.”
In addition, special-ed managers have failed to provide an environment where teachers can talk with physicians confidentially over the phone about students’ medical histories and needs.
“This is not only our office space but is also supposed to be our department meeting space, and storage for the entire district’s (orthopedic impairment) equipment,” said the teacher. “There are (not enough) phone lines for each teacher to work privately and we deal in medical information all the time. I worked with a manager last year to get an order in, and special-ed denied it. The total cost for the three lines was about $500.”
(You can see the one portable phone with one shared voice-mail system in the “after” photo above. For the record, Fresno Unified’s 2019-20 budget is more than $1 billion.)
The “before” picture of the equipment in the room raises questions. Does Fresno Unified even have an inventory system? And how long does the district store outdated stuff?
Apparently, the rule of thumb is, keep it until we’re out of room — or the rats take over.

Who Owns This Mess?

I asked the district for clarity on who is responsible for the room: special-ed management or the school principal, Steve Zoller.

Consequences Must Accompany This ‘Teachable Moment’

Certainly, this situation presents Nelson with a “teachable moment.”
Lesson One: This kind of indifference and incompetence ends today.
Lesson Two: There are new consequences for leaders who fail.
Lesson Three: Punishment no longer is a lateral transfer or, as often happens in Fresno Unified, a promotion.
Nelson, by nature, is an upbeat and forgiving leader. One who is willing to forgive managers who believe they are protected until hell freezes over — or they retire.
It’s past time for Nelson to show his teeth.
If he doesn’t, nothing changes. Meaning: students won’t get the first-rate education they deserve.