News stories and social media reports about threats and shootings at schools lead many to conclude that schools are inherently unsafe places, when in fact children are safer there than elsewhere, consultant/author John Van Dreal said Monday at the start of a three-day Behavior Threat Assessment workshop being hosted by the Fresno County Superintendent of Schools.

Statistically, there’s about a one in 4 million chance of a child being murdered at a school, and kids are 40 times more likely to be killed outside of school, Van Dreal said.

There are many commonsense steps that schools can take, such as limiting access to a single entrance or even putting away scissors, he said.

But it’s also important to know students well enough to be able to recognize when they are undergoing stressors that could lead them to acts of violence.

At the workshop this week in northwest Fresno, Valley school administrators, teachers, counselors and law enforcement are learning protocols and procedures that are designed to help make schools as safe as possible. 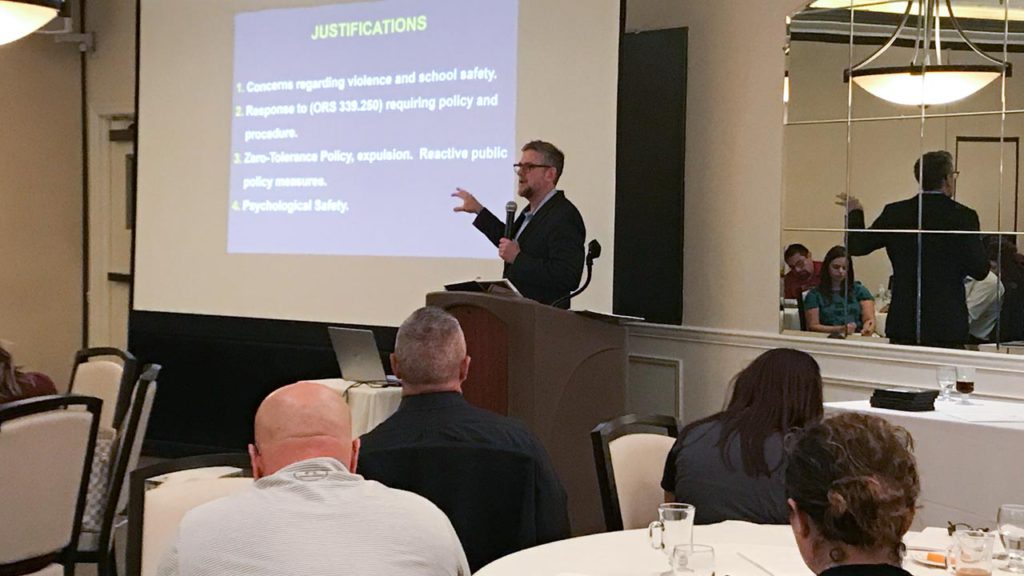 Van Dreal, who retired as the director of safety and risk management for Salem-Keizer Public Schools in Oregon, developed a threat assessment system after the mass shooting at Columbine High School that’s called the Salem-Keizer Model. It draws on the federal Safe School Initiative but also incorporates feedback from school officials around the country, he said.

The goal is to provide school, mental health, and law enforcement officials with the tools to intervene early, which not only keeps other students and staff safe from harm but also can keep students out of the juvenile justice system, Van Dreal said.

“If you get these before they make it to an arrest, you’re doing your job,” he said.

But if a mass shooting is forestalled only when officials intercept a student with a backpack full of guns, “in K-12, if it gets to that point, to a certain degree we’ve failed,” Van Dreal said. “We’re going to lose that kid. If that kid gets institutionalized, he’s just a different kid when he gets out.”

Mass Shooting Was Close to Sunnyside

The workshop participants include Pablo Jimenez, a vice principal at Sunnyside High School, who said he was comparing the Salem-Keizer Model against the threat assessment system now used by Fresno Unified. Jimenez said the two systems shared similarities, but he was on the lookout for anything that could be added to Fresno Unified’s system.

Sunday’s mass shooting at a southeast Fresno home that killed four and injured six was only about a mile from Sunnyside, and it’s a painful reminder that violence can strike anywhere, at any time, Jimenez said. So if there are any opportunities for intervention that will make kids safer, he said he’s eager to learn about and apply them.

Van Dreal said the concepts to assessing behavior threats in schools can also be applied in the community.

“The first five basic concepts I teach are applicable with any human being anywhere who’s targeting another group of people, so not just like reactive, angry aggression ‘because I’ve been offended and now I’m gonna be mad at you’ kind of stuff,” he said. “This material is very applicable to what we call targeted violence.”

Targeted violence is typically a series of steps that involves planning, preparation, and acquiring weapons.