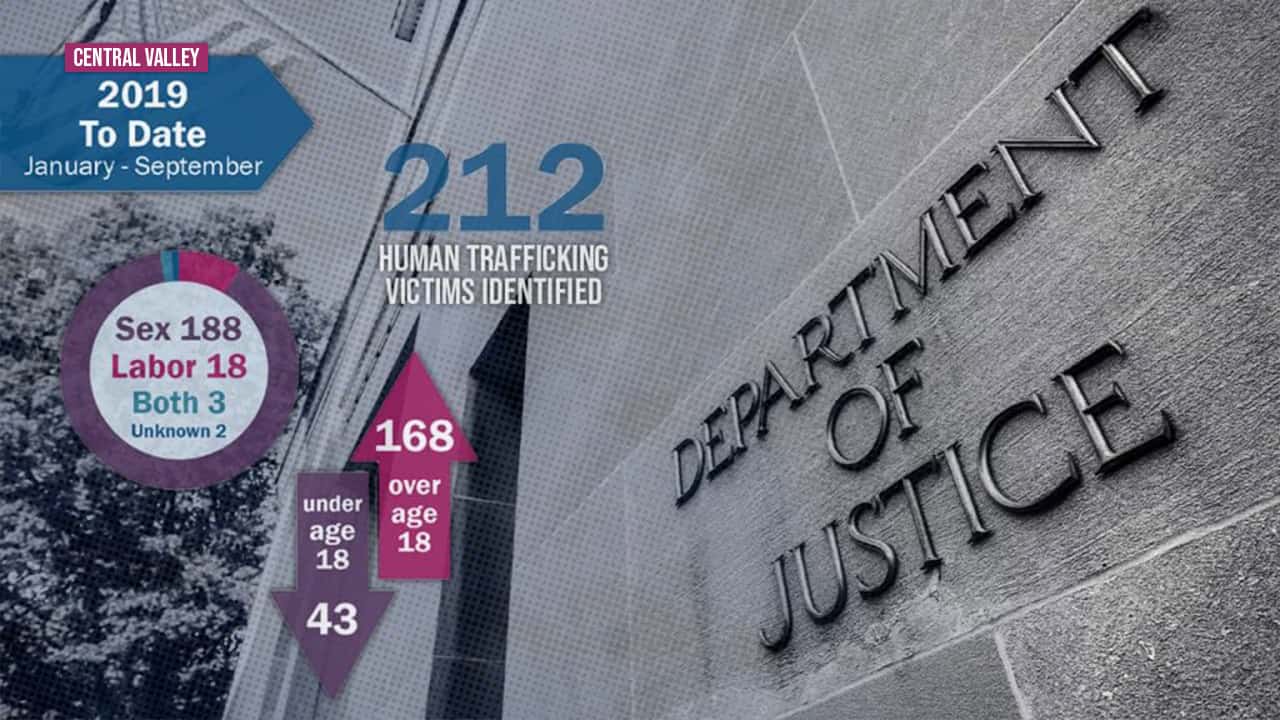 The U.S. Department of Justice has awarded nearly $1.4 million in grants to agencies in Fresno and Tulare County to battle human trafficking and provide services to trafficking victims, the agency announced Tuesday.

Listen to this article:
DOJ is awarding more than $100 million in grants through the Office for Victims of Crime Programs, the Bureau of Justice Assistance, National Institute of Justice, and the Office of Juvenile Justice and Delinquency Prevention. The awardees include the Fresno Economic Opportunities Commission, which was awarded $499,998 in a three-year grant to provide services to victims through the Central Valley Against Human Trafficking project, and Tulare County, which was awarded $899,737 for the District Attorney’s Office Human Trafficking Task Force.
“We’re able to expand services, but this has been a long time coming,” said Sarah Johnston, program manager for the Central Valley Against Human Trafficking project, which serves a six-county region and leads the anti-trafficking efforts throughout the Central Valley.
There have been more than 993 victims of human trafficking from 2010 through September 2019 in the region, including 212 so far this year, according to the Fresno EOC. The majority of the 212 were trafficked for sex, and nearly all (198) were women or girls.

Fresno EOC provides Sanctuary and Support Services for runaway and exploited youth and oversees the CVAHT project that serves a six-county region and leads anti-trafficking efforts throughout the Central Valley.

In addition, the grant will underwrite the establishment of a minor empowerment group that will help 25 trafficking victims each year of the three-year program, with therapy sessions to help them build a peer support system, develop coping mechanisms, and increase self-esteem, Johnston said.


“This is an issue that folks weren’t talking about years ago. But we really believe that this task force and the awareness that is raised of human trafficking in our community has really shown why it has been a success.” — Stuart Anderson, Tulare County District Attorney’s Office spokesman
Also, the grant will underwrite a parent support group to help parents learn more about the issues surrounding their trafficked child and how to reconnect, she said.
A portion of the grant — $45,000 — will underwrite a bed at the Fresno EOC Sanctuary Homeless Youth Shelter that will be designated for trafficking victims.
Meanwhile, the grant is enabling the Fresno EOC to hire a minor services coordinator who will help develop new prevention and intervention projects for victims of sex trafficking who are younger than 18.

Portions of the grant will be funneled to partner agencies, Johnston said. Breaking the Chains, which provides rescue and restorative services to human trafficking victims in the Central Valley, will get $20,000 each year, or $60,000 over three years, for a half-time advocate. The agency already receives $45,000 for a case manager and half-time advocate, but that’s through a separate one-year grant, Johnston said.

The Family Healing Center will get $10,000 yearly to provide therapy services for clients from CVAHT, Johnston said.

The grant to the Tulare County District Attorney’s Office — the second from the Department of Justice — helps underwrite the efforts of the county’s Human Trafficking Task Force, spokesman Stuart Anderson said. The task force was established by the DA’s office in 2014 to join law enforcement and other stakeholders in identifying and providing services to victims of human trafficking, and to investigate and prosecute the offenders.
The first three-year federal grant, which was awarded in 2016, paid for a full-time DA investigator and sheriff’s deputy to focus on human trafficking cases, and also paid for an evaluator-consultant to track the progress of the Tulare County program and provide progress reports to the Justice Department, he said.

The new three-year grant, which begins Jan. 1, will include those positions and also cover the cost of adding a coordinator to the task force, who will be responsible for coordinating law enforcement trainings, coordinate outreach and meetings, raise community awareness, and facilitate human trafficking investigations and prosecutions, Anderson said.
“We’ve been very pleased with how this has evolved in terms of community awareness,” he said. “This is an issue that folks weren’t talking about years ago. But we really believe that this task force and the awareness that is raised of human trafficking in our community has really shown why it has been a success.
“And we’re very much grateful to the Department of Justice for finding our task force ready and up to the challenge for another three years. And we will continue to help victims become survivors.”