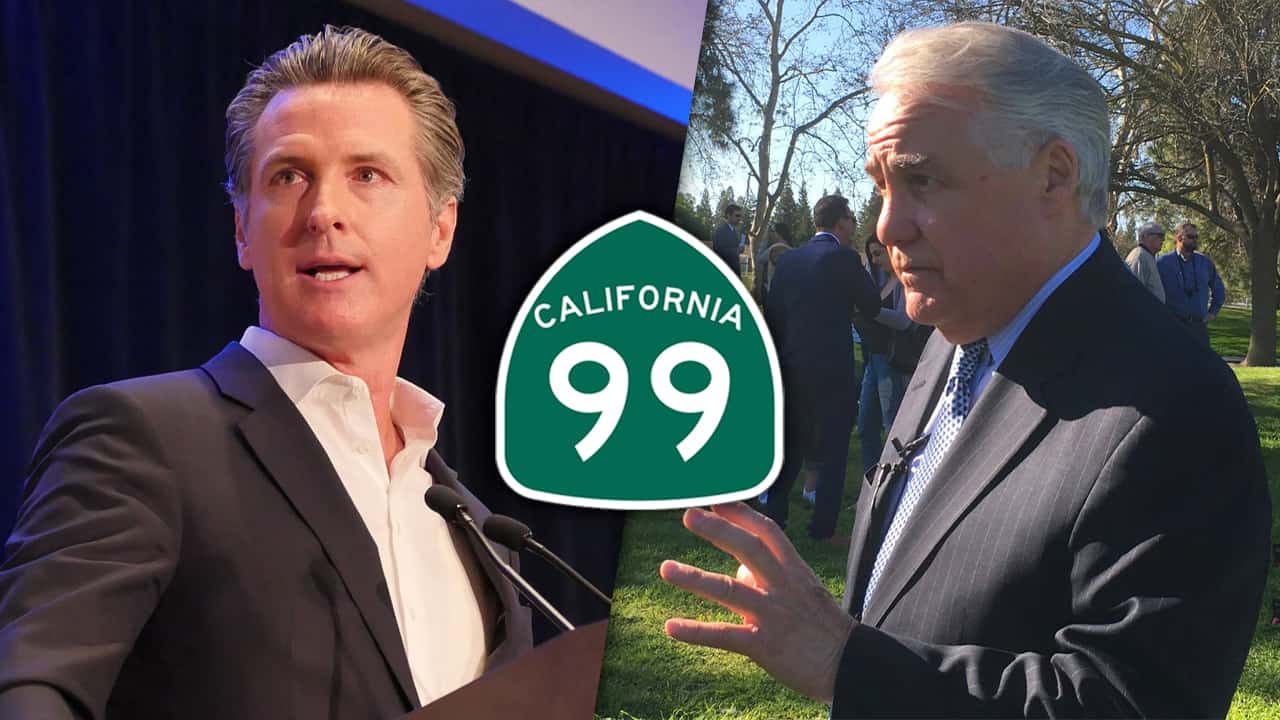 After the September executive order, Assemblyman Jim Patterson (R-Fresno) said that Newsom’s order deleted $32 million from projects for Highway 99 and Highway 46.
“If the governor is serious, that he cares a wit about 99, then he can immediately — like today — instruct Caltrans to return the 99 and 46 improvements with a stroke of a pen,” Patterson said of Newsom’s Friday comments. “He can do it with a phone call. Caltrans has deleted the funding. If he serious, he can put back. He’s the governor of the state. He runs the place.”
Newsom said that some people conflating the project deletions with his executive order spelling out $5 billion for larger climate change goals.
“Maybe he needs to look up the definition of delete. I think he knows what it is,” Patterson said sarcastically.
Projects, Newsom noted, can start when a local match is identified.
The California Transportation Commission meets Friday, Nov. 15, in Fresno to discuss highway funding projects.

Newsom said in his keynote address that the Valley’s economy matters in the overall health of the state.
“I care about this damn Valley because I care about this state. I’m so sick and tired of this notion that somehow we are living in two different worlds in this state, the coastal economy and the inland economy,” Newsom said.
He praised the work of Fresno DRIVE — a blueprint of how to spend $4 billion to improve Fresno — and incubators like Bitwise Industries.
“The state’s vision on economic development will never be realized from Sacramento down. It’s realized at the local level. That is the spirit of Regions Rise Together,” Newsom said.
Newsom highlighted California’s economic engine, its low unemployment, and its $21 billion state government surplus.
“Eat your heart out, Donald Trump. The country has come nowhere near close to what we have in our GDP growth,” Newsom said.
The governor said the state is investing a historic amount in affordable housing, education, and addressing income inequality.

Speaking to the media after his speech, Newsom announced new economic programs to benefit the Central Valley.
One is the Integrated K-16 Collaborative that Newsom said will provide a workforce training program.
“It is the most robust higher education pilot project the state has ever engaged in,” he said.
He also said that philanthropies have committed $23 million to the Central Valley.
This is on top of a $13 million plan for AmeriCorp and $10,000 scholarships for volunteerism announced Thursday.

The governor says he remains willing to reform state environmental review laws to expedite housing construction — especially affordable housing.
The review, known as CEQA, is blamed by some developers for hindering housing growth.
Newsom said some reforms have been made to build homeless shelters and affordable housing projects. He wants to see more.
“We’re working … the larger developers in the state and our labor partners to see if there is some consensus and compromise for a bigger package. It’s not been done for decades for a reason, and I’m not naive about the challenge of bringing the parties together,” Newsom said.

During his speech, Newsom swiped at Donald Trump, joking that he wasn’t hugged enough as a child by his father.
Asked whether trading Twitter insults with Trump and his supporters is good for political discourse, Newsom brushed aside the question.
“You should ask him,” Newsom said. “I am just responding to these assaults.”
The latest round of the Twitter war saw Trump tweet on Nov. 3 “The Governor of California, @GavinNewsom, has done a terrible job of forest management. I told him from the first day we met that he must “clean” his forest floors regardless of what his bosses, the environmentalists, DEMAND of him. Must also do burns and cut fire stoppers…..”
To which Newsom replied, “You don’t believe in climate change. You are excused from this conversation.”

You don’t believe in climate change. You are excused from this conversation. https://t.co/PSt8N39Er5

Also in the last week on Twitter, Newsom called former Trump Attorney General and current Alabama senatorial candidate Jeff Sessions “delusional,” and said Sen. Lindsey Graham (R-South Carolina) was “chasing a runaway baby stroller down Pennsylvania Avenue.”
Newsom said he’s praised Trump when he’s offered aid in the wake of the state’s devastating wildfires. But, Newsom said, the president responded by threatening to take away state emergency funding.
“With respect, I think you will see the answer to that question lies in the mirror every morning when the president of the United States wakes every morning and shaves. … He needs to set the tone and tenor as leader of the free world,” Newsom said.
He continued.
“His childishness is legendary. It’s an embarrassment to this country. And those that continue to support that kind of behavior need to really question whether or not that is the kind of modeling they want for their children and grandchildren. We’re very proud of the way we model, the way we engage with our diverse communities and people of all political stripes. The president of the United States stands alone as someone that is struggling to mature into this office.”