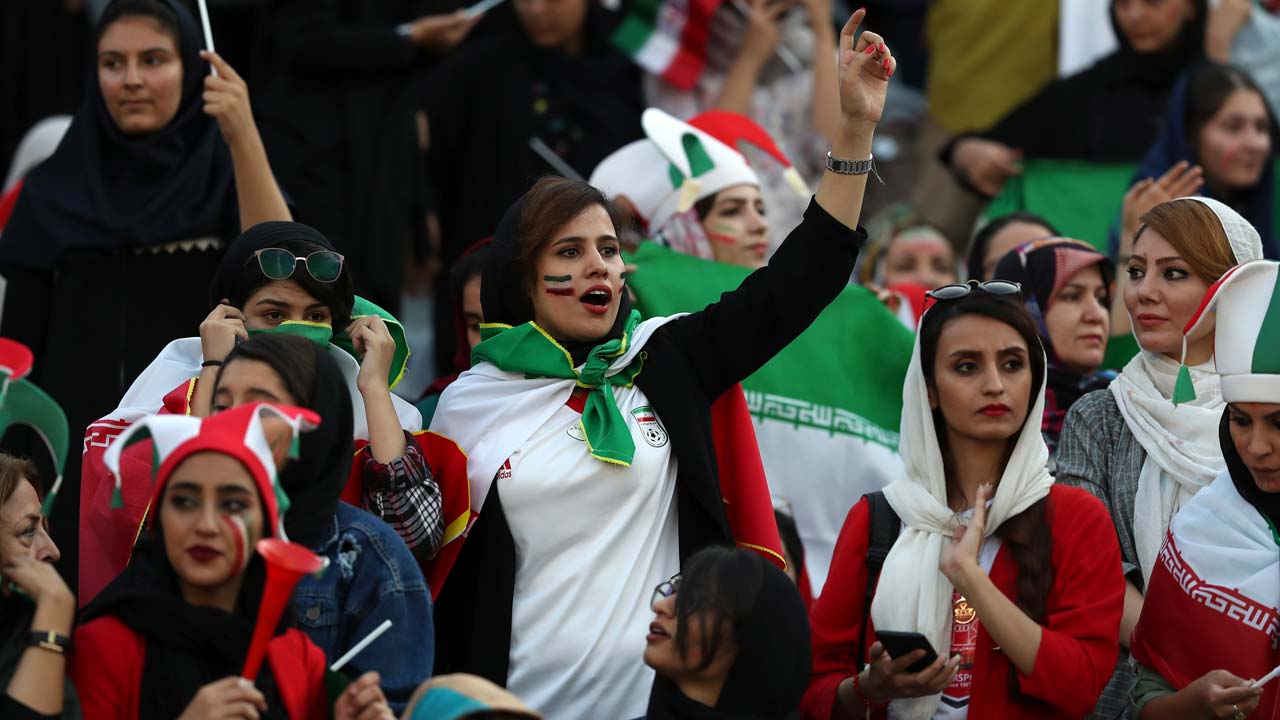 TEHRAN, Iran — They had to sit well apart from the men, and the stadium was practically empty, but thousands of Iranian women in merry jester hats and face paint blew horns and cheered Thursday at the first FIFA soccer match they were allowed to freely attend in decades.
In what many considered a victory in a decades-long fight by women in Iran to attend sporting events, they wrapped themselves in the country’s vibrant red, green and white colors and watched with excitement as Iran thrashed Cambodia 14-0 in a 2022 World Cup qualifier at Tehran’s Azadi, or Freedom, Stadium.
“We are so happy that finally we got the chance to go to the stadium. It’s an extraordinary feeling,” said Zahra Pashaei, a 29-year-old nurse who has only known soccer games from television. “At least for me, 22 or 23 years of longing and regret lies behind this.”
As one woman shouted from a passing minibus before the match: “We are here finally!”

So far, Iran’s hard-line Islamic theocracy is not willing to go as far some women would like. Authorities announced they will allow women to attend only international soccer matches.
Women have been banned from many sporting events in Iran since 1981, during the early years of the country’s Islamic Revolution. Iran is the world’s last nation to bar women from soccer matches. Saudi Arabia recently began letting women see games.
Under pressure from FIFA, Iran let a carefully controlled number of women into the stadium, allocating them 4,000 tickets in a venue that seats about 80,000 people, and arranged for 150 female security personnel in black chadors to watch them. They sat at least 200 meters (yards) from the few thousand men at the match.
Iranian state television, which long has been controlled by hard-liners, aired footage of women cheering, and commentators even acknowledged their presence.
“There can be no stopping or turning back now,” FIFA President Gianni Infantino said in a statement. “History teaches us that progress comes in stages, and this is just the beginning of a journey.”

Iran faced a potential ban from FIFA international matches if it didn’t allow women into the game. The pressure from FIFA and Iran’s soccer-loving public has grown since September, when an Iranian woman detained for dressing as a man to sneak into a match set herself on fire and died upon learning she could get six months in prison.
The self-immolation of 29-year-old Sahar Khodayari, who became known as the “Blue Girl” for her love of the Iranian team Esteghlal, whose uniforms are blue, shocked Iranian officials and the public.
At the match Thursday, a reporter with Iran’s state-run IRNA news agency posted a video online of chador-wearing officers trying to grab a woman she said had a sign in Khodayari’s honor. The crowd could be heard chanting, “Let her go!” The reporter wrote on Twitter that the woman slipped away from officers and ran off.
Hard-liners and traditional Shiite clerics, citing their interpretation of Islamic law, believe in segregating men and women at public events, as well as keeping women out of men’s sporting events.

The effort to allow women back into stadiums has gone through fits and starts.
In 2006, then-President Mahmoud Ahmadinejad said he wanted women to attend matches to “improve soccer-watching manners and promote a healthy atmosphere.” However, Supreme Leader Ayatollah Ali Khamenei, who has final say on all matters of state, opposed the decision.
Then, last year, Iranian authorities allowed a select group of women into Azadi Stadium by invitation only to watch the Asian Champion League final.
Infantino said that “FIFA now looks more than ever toward a future when ALL girls and women wishing to attend football matches in Iran will be free to do so, and in a safe environment.”
Activist groups outside of Iran remain suspicious of Tehran.

Amnesty International called the latest decision “a cynical publicity stunt by the authorities intended to whitewash their image.”
“Instead of taking half-hearted steps to address their discriminatory treatment of women who want to watch football, the Iranian authorities should lift all restrictions on women attending football matches, including domestic league games, across the country,” said Philip Luther, Amnesty’s Middle East and North Africa research and advocacy director.
Still, many in Iran embraced the move, like shopkeeper Amir Ali Bagheri, who sold Pashaei a Team Melli jersey ahead of the match.
Women “are so excited they are going to the stadium,” he said. “God willing, there will be freedom sooner so that they can attend all matches, not just the national team matches. That will be much better.”
After the match, Pashaei said she hoped authorities would open up more matches to women so she could attend them with her family.
“The ‘Blue Girl’ and her stories did help. Of course, efforts by women activists and feminists were very effective,” she said. “We are happy anyway and hope this will continue, not just in national team matches.”