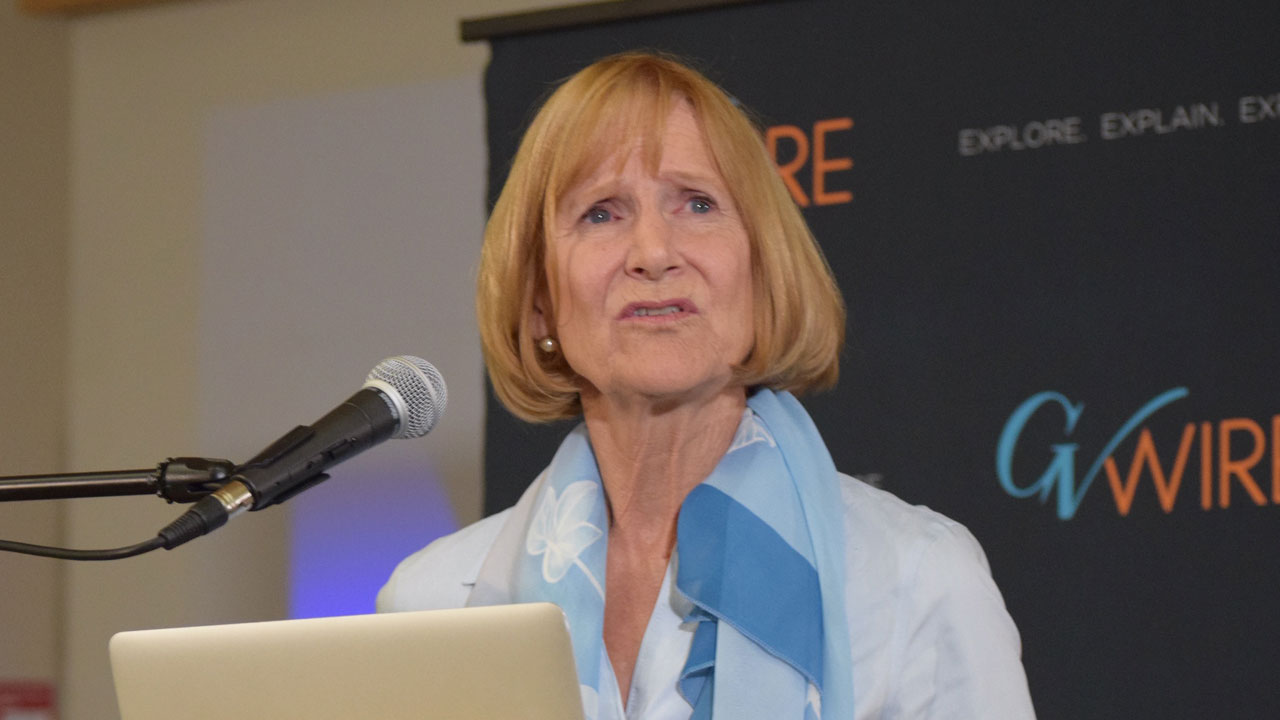 America’s foreign policy in Israel is being guided by neoconservatives whose plan is to build up Israel while destabilizing nearby countries — and American tax dollars are helping to pay for it, author Alison Weir said Wednesday evening at Clovis Community College.
Weir, a longtime critic of Israel’s treatment of Palestinians,  said the U.S. spends more than $10 million each day in support of Israel.

Listen to this article:
Weir’s appearance at a packed auditorium at the northeast Fresno college campus was hosted by GV Wire as part of an ongoing speaker series. She came to Fresno in May as the keynote speaker at a Fresno Center for Nonviolence event.

Wednesday’s audience ranged from 18-year-old Clovis College student Reem Bali and her friend, Sabreen Qass, 17, to 91-year-old Munzer Afifi of Fresno, whose Palestinian family was forced from their home in Jaffa during the formation of the state of Israel after World War II.


“They stole our house, and they didn’t reimburse.” — Fresno resident Munzer Afifi, formerly of Palestine
Afifi said his family lost property when they were forced from their homeland in what Weir refers to as “ethnic cleansing.”
“They stole our house, and they didn’t reimburse,” he said. Asked if he had ever been back since, Afifi said, “I wouldn’t go back and give them a cent of my money.”
Bali said she and Qass came to hear Weir’s speech to stand up for their homeland of Palestine. She said she thinks many people are unaware of what is happening there, “the killings, the settlements.”

Visit to Mideast Was a Life-Changer

Weir, a journalist and researcher, founded the research institute If Americans Knew after visiting Palestine and Israel 18 years ago and seeing what Palestinians are subjected to — and what’s often not reported by the U.S. media.
She became convinced that Americans’ support for Israel would lessen once they were better educated about those conditions and the politics of the region.
Weir talked about how the deaths of Israelis get the bulk of mainstream news coverage, even though the numbers are small compared to the thousands of Palestinians whose deaths frequently go unreported by western media outlets.
Weir provided a historical context for how the state of Israel was created in land once ruled by the Ottoman Empire and then later by the British Empire, and how U.S. Supreme Court justices and other high-ranking American officials worked behind the scenes to ensure U.S. support for a Jewish state.

Taking Away Their Land

Palestine was occupied predominantly by Muslims, with smaller percentages of Christians and Jews, prior to World War II, Weir said. In 1947 the United Nations voted for a partition plan that split Palestine between Arabs and Jews, which soon sparked the first in a series of wars between Israel and its Arab neighbors.
Weir, who authored “Against Our Better Judgment: The Hidden History of How the U.S. Was Used to Create Israel,” was asked in a question-and-answer session after her talk about the current prospects for a two-state solution to create an autonomous Palestinian homeland.
“The two-state solution has never been a solution,” she said. Under the proposal, Palestine would wind up with three non-contiguous pieces of land and would not have control over its own airspace or borders, she said.

There were no protests inside the auditorium, even though groups that claim Weir is anti-Semitic and anti-Israel had lobbied to have her appearance at Clovis Community College canceled.

GV Wire publisher Darius Assemi said after Weir’s talk that the online news site will continue to bring speakers who offer a variety of insights to the Fresno area.
The goal is to introduce different voices and viewpoints so residents can be educated and reach their own conclusions, Assemi said, adding, “Stay tuned for a series of speakers on this hot topic: Israel, Palestine and the Middle East. … These are topics and issues that don’t get covered in the mainstream media.”