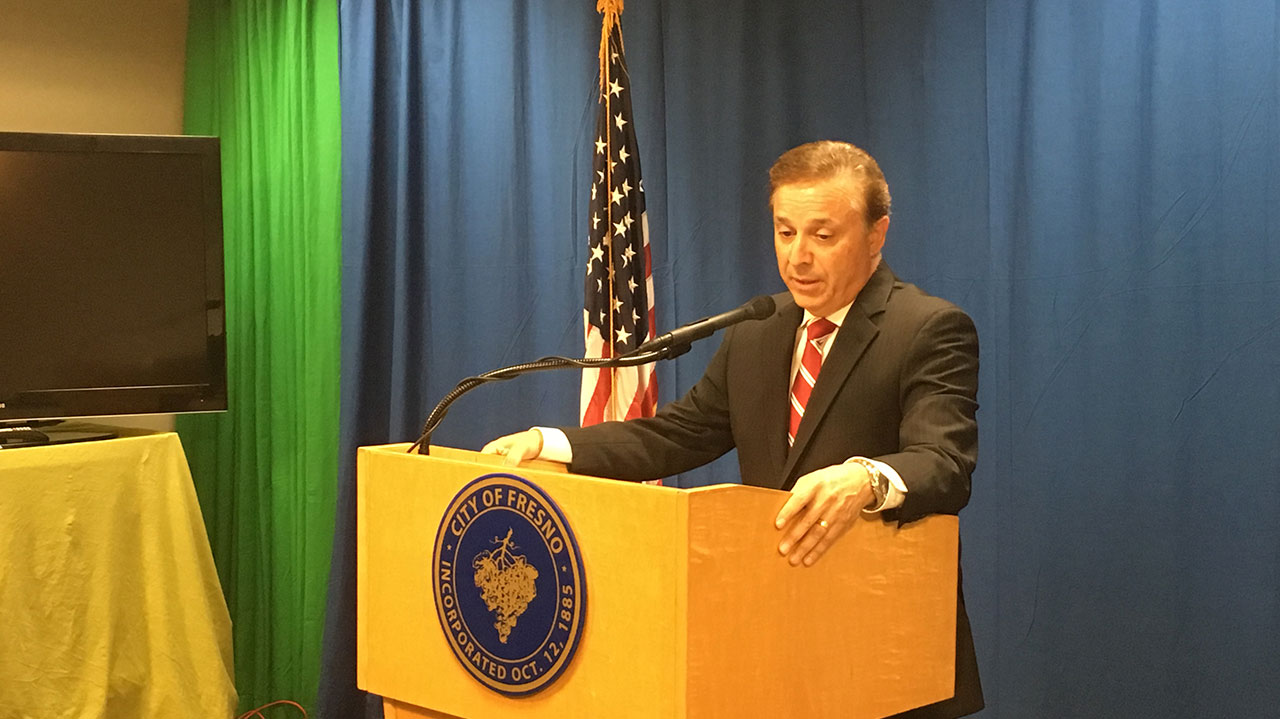 A Fresno councilman says a key piece of information was missing when a vote was taken on providing public money to the downtown South Stadium project.
What was the withheld info? One of the developers had filed a claim for damages against the city on another project.
Because of that, Garry Bredefeld wants a special meeting with a revote.
“Everybody needs to know all the information when you are making a critical vote with taxpayer money. Now, the reality of this is there is a lot of stench with this. And a lot of incompetence. The only way you disinfect the stench is you shine a light on it,” Bredefeld said at a Tuesday news conference.
The developer in question is Terance Frazier. He is a partner with Mehmet Noyan in the downtown project, a combination of market-rate and affordable housing along with retail.
Frazier also runs a nonprofit group — the Central Valley Community Sports Foundation — that operates a city contract for the Granite Park sports complex. The two businesses are separate entities.
The city conducted an audit of Granite Park last year, finding fault with CVCSF’s bookkeeping practices. It also questioned accounting methods used for loans made to the foundation and their repayment.
In July, Frazier filed a claim for damages regarding the audit. Frazier said its release and findings were premature and unfair.
Bredefeld said only two councilmembers of the five who voted on the South Stadium subsidy were aware of that fact.

Bredefeld said the South Stadium project did not deserve more city funds because of the audit findings on Granite Park.
“I’m linking the developer together. It’s the same developer. I don’t know how you can separate the developer from South Stadium and Granite Park,” Bredefeld said.
Mark Standriff, a city spokesman, disagreed.
“You have a couple of different projects… Each one of them are different entities and should stand on their own merits,” Standriff said.
Bredefeld supported the audit’s findings, and said that should have been enough to not grant the foundation its $150,000 subsidy for the year. Multiple times during his news conference, he called the city “incompetent” for its handling of Granite Park.
The foundation’s attorney said the audit had faults.
“The audit was incomplete when it was released. It should have never been released. It contained many errors of fact,” said David Weiland, attorney for CVCSF.
Weiland added that Frazier turned over documents to the city that the audit said was missing.
Even with the negative report, City Attorney Douglas Sloan, during an April council meeting, publicly said the group was in compliance. Bredefeld said Sloan was wrong for making such a statement.
Additionally, Bredefeld pointed to CVCSF’s failure to construct volleyball and basketball courts, as well as a restaurant, under the terms of its agreement with the city.

Bredefeld said that at the time of the vote, only council president Paul Caprioglio and vice president Miguel Arias knew of Frazier filing claims against the city. He said, at the very least, the city attorney should have let all the council know.
“I believe I was entitled (to the information) from the city attorney, quite honestly,” Bredefeld said. Sloan did not return GV Wire’s request for a comment.
Weiland said that is not a reason for a revote.
“That is the city attorney’s problem, not Mr. Frazier’s,” Weiland said.
Caprioglio would not comment on when he knew about the claims. Arias said the city’s risk management department informs council leadership about many claims against the city, but he does not read them all since they are only potential litigation. The city council, Arias said, deals with actual litigation.
“(Bredefeld) could have picked up the phone and asked the city attorney any question he wanted. It seems Garry is mad because Garry didn’t do his homework,” Arias said. “It seems he is trying to move the goal posts for political headlines versus actual fiscal concerns demonstrated by the fact he has voted to approve housing developments that are actually suing us.”
Arias referred to developers, such as Granville Homes, who often have projects in front of the council. Granville is also engaged in litigation against the city regarding certain impact fees. Darius Assemi, president and CEO of Granville, publishes GV Wire.
Councilman Nelson Esparza said he learned of the Frazier claims after the South Stadium vote.

On Aug. 15, the council — acting as the Housing Successor to the former Redevelopment Agency — voted 4-1 to add $659,000 in local funds to a downtown housing project developed by Frazier and business partner Mehmet Noyan.
The $20 million South Stadium project, funded in part by state and local funds, would be a mixed-use of retail and housing, with approximately 11 units set aside as affordable housing.
Bredefeld was the only no vote. Councilwoman Esmeralda Soria recused herself because of her dating relationship with Frazier. Councilman Mike Karbassi had yet to be sworn into office and also did not vote.

Frazier filed his claim July 3, saying the audit was misleading and inaccurate, causing him to lose business. He said it was a political hit against him, orchestrated by Mayor Lee Brand’s chief-of-staff, Tim Orman.
The city has denied the accusations.
Initially, Frazier asked for $10 million in damages, $6 million for his foundation and $4 million personally. He filed an amended claim on July 17, because the city’s form for claims does not allow a specific dollar amount to be mentioned if damages are over $10,000.