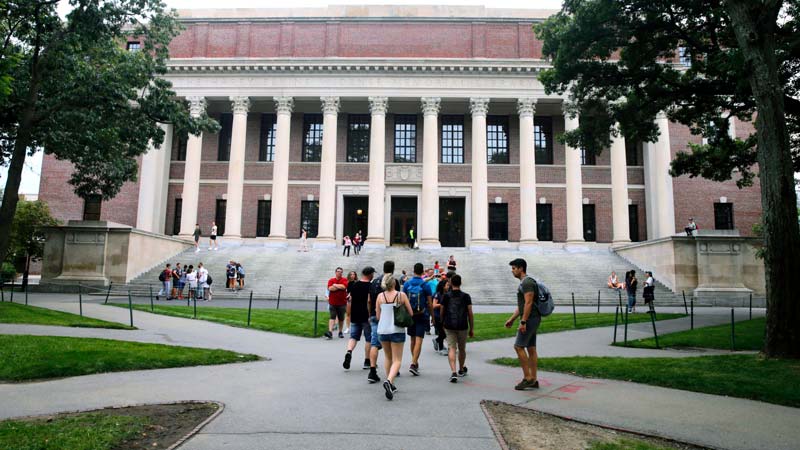 BOSTON — A Palestinian student trying to start classes at Harvard University was denied entry to the U.S. in a case that critics of the Trump administration call emblematic of overly invasive screening at border checkpoints.
Ismail Ajjawi, who had been living in Lebanon, was refused entry into the U.S. after landing Friday at Logan International Airport in Boston, university and federal officials confirmed this week. The 17-year-old freshman said the denial had to do with politically oriented social media posts by his friends.

U.S. Customs and Border Protection would not confirm that, with spokesman Michael McCarthy saying only that the decision to cancel Ajjawi’s visa was based on information discovered during an inspection. He declined to elaborate but stressed that Ajjawi was not deported, meaning he can still seek reentry.
Harvard is working to resolve the matter, university spokesman Jason Newton said. AMIDEAST, a nonprofit organization that awarded Ajjawi a scholarship, is providing legal assistance.
Federal agents detained Ajjawi at the airport for eight hours, searched his cellphone and laptop, and questioned him about his friends’ social media posts, according to a written statement Ajjawi gave to The Harvard Crimson , the student newspaper.
The posts included “political points of view that oppose the U.S.,” Ajjawi wrote, not elaborating on their content.
“I responded that I have no business with such posts and that I didn’t like, (s)hare or comment on them and told her that I shouldn’t be held responsible for what others post,” he wrote to the Crimson about his interaction with a federal agent.
The student’s family won’t comment beyond the statement in the Crimson, said Ajjawi’s father, Bassel.

Searches of Social Media Accounts on the Rise

Searches of electronic devices and social media searches at border points were conducted under previous administrations, but free speech groups complain they have been stepped up since President Donald Trump took office in 2017.
“The chilling effects of incidents like these ripple through communities far beyond Harvard’s incoming freshman class, resulting in widespread self-censorship on social media and threatening intellectual freedom,” said Carrie DeCell, a staff attorney at Columbia University’s Knight First Amendment Institute, which has sued the administration to release more information about the enhanced enforcement methods.
PEN America, a nonprofit that advocates for free expression, called the incident “perverse.”
“Preventing people from entering the country because their friends critiqued the U.S. on social media shows an astounding disregard for the principle of free speech,” said Summer Lopez, a senior director.
A group that advocates for stricter immigration laws, the Center for Immigration Studies, did not respond to a message seeking comment. But the Trump administration says the enhanced searches are critical to prevent extremists from entering the country.

The State Department in June expanded the measures, requiring nearly all applicants for U.S. visas to submit their social media usernames, previous email addresses and phone numbers. Under prior administrations, such information was requested only of applicants identified for extra scrutiny, such as people who had traveled to areas controlled by terrorist organizations.
So far in fiscal year 2019, more than 235,000 people seeking entry into the country have been deemed inadmissible, up about 9% from the 216,370 denied in all of fiscal 2017, according to Customs and Border Protection data .
It’s not clear how many social media searches border officials have conducted since the new policy took effect. But the agency conducted 33,295 electronic device searches in fiscal year 2018, or nearly four times the 8,503 conducted in fiscal 2015, according to a lawsuit by the American Civil Liberties Union and other groups.
International students and university instructors are dealing with “postponements and disruptions for what have previously been routine immigration processes such as family visas, renewals of status, or clearance for international travel,” Harvard University President Lawrence Bacow wrote in a July letter to Secretary of State Mike Pompeo and acting Secretary of Homeland Security Kevin McAleenan.

Student Visas Reduced Nearly by Half

The State Department issued just 362,929 student visas in fiscal year 2018, down nearly half from the 644,233 issued in fiscal 2015, according to department data .
Ajjawi told The Crimson he still hopes to join his classmates in time for the start of classes Tuesday. His family lives in a camp for Palestinian refugees in the southern Lebanon port city of Tyre.
As a teenager, Ajjawi made headlines in Lebanon for being a top scorer on primary and secondary school exams. The family’s home is filled with certificates of excellence and appreciation, and he said he plans to study medicine.
“I want to become a doctor because there are a lot of things in medicine that have not been discovered yet,” Ajjawi told a station in Lebanon this year.
In an Al-Araby TV interview that aired Friday as his son was flying to the U.S., Bassel Ajjawi had this message for his son: “I am very proud of you and hope you will be an exemplary representative of the Palestinian people abroad.”