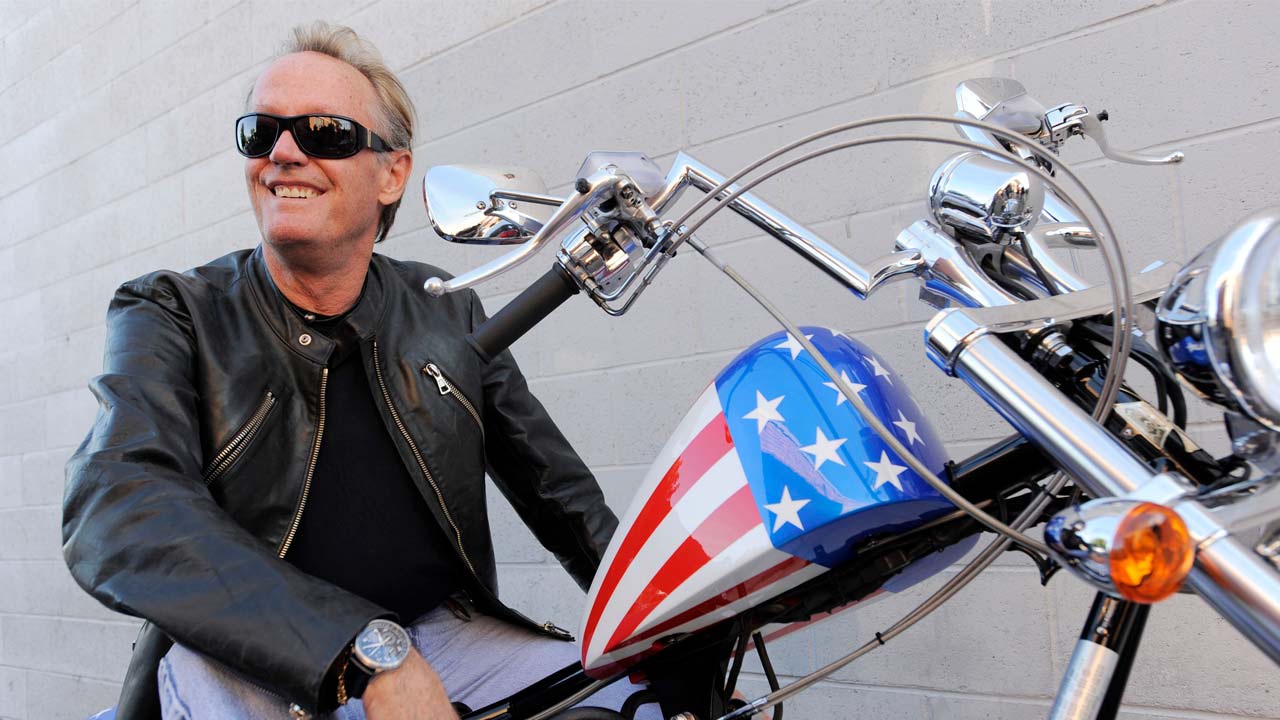 LOS ANGELES — Actor Peter Fonda, the son of a Hollywood legend who became a movie star in his own right after both writing and starring in the counter-culture classic “Easy Rider,” has died. His family said in a statement that Fonda died Friday morning at his home in Los Angeles. He was 79.
The official cause of death was respiratory failure due to lung cancer.
“I am very sad,” Jane Fonda said in a statement. “He was my sweet-hearted baby brother. The talker of the family. I have had beautiful alone time with him these last days. He went out laughing.”

Born into Hollywood royalty as Henry Fonda’s only son, Peter Fonda carved his own path with his non-conformist tendencies and earned an Oscar nomination for co-writing the psychedelic road trip movie “Easy Rider.” He would never win that golden statuette, but would later be nominated for his leading performance as a Vietnam veteran and widowed beekeeper in “Ulee’s Gold.”
Fonda was born in New York in 1940 to parents whose personas were the very opposite of the rebellious images their kids would cultivate. Father Henry Fonda was already a Hollywood giant, known for playing straight-shooting cowboys and soldiers. Mother Frances Ford Seymour was a Canadian-born U.S. socialite.
He was only 10 years old when his mother died. She had a nervous breakdown after learning of her husband’s affair and was confined to a hospital. In 1950 she killed herself, slashing her throat with a razor. It would be about five years before Peter Fonda learned the truth behind her death.
Fonda accidentally shot himself and nearly died on his 11th birthday. It was a story he told often, including during an acid trip with members of The Beatles and The Byrds during which Fonda reportedly said, “I know what it’s like to be dead.”
John Lennon would use the line in The Beatles song “She Said She Said.”

Fonda went to private schools in Massachusetts and Connecticut as a child, moving on to the University of Nebraska in his father’s home state, joining the same acting group — the Omaha Community Playhouse — where Henry Fonda got his start.
He then returned to New York and joined the Cecilwood Theatre, getting small roles on Broadway and guest parts on television shows including “Naked City” and “Wagon Train.”
Fonda had an estranged relationship with his father throughout most of his life, but said that they grew closer over the years before Henry Fonda died in 1982.
“Peter is all deep sweetness, kind and sensitive to his core. He would never intentionally harm anything or anyone. In fact, he once argued with me that vegetables had souls (it was the ’60s),” his sister Jane Fonda said in her 2005 memoir. “He has a strange, complex mind that grasps and hangs on to details ranging from the minutiae of his childhood to cosmic matters, with a staggering amount in between. Dad couldn’t appreciate and nurture Peter’s sensitivity, couldn’t see him as he was. Instead, he tried to shame Peter into his own image of stoic independence.”

Although Peter never achieved the status of his father or even his older sister, the impact of “Easy Rider,” which just celebrated its 50th anniversary, was enough to cement his place in popular culture.
Fonda collaborated with another struggling young actor, Dennis Hopper, on the script about two weed-smoking, drug-slinging bikers on a trip through the Southwest as they make their way to New Orleans for Mardi Gras.
On the way, Fonda and Hopper befriend a drunken young lawyer — Jack Nicholson in a breakout role — but raise the dander of Southern rednecks and are murdered before they can return home.
Fonda’s character Wyatt wore a stars-and-stripes helmet and rode a motorcycle called “Captain America,” re-purposing traditional images for the counter-culture.
Actress Illeana Douglas tweeted her condolences Friday with the hashtag “RIPCaptainAmerica.”
“‘Easy Rider’ depicted the rise of hippie culture, condemned the establishment, and celebrated freedom,” Douglas wrote. “Peter Fonda embodied those values and instilled them in a generation.”
Fonda had played bikers before “Easy Rider.” In the 1966 Roger Corman-directed “Wild Angels,” in which he plays Heavenly Blues, leader of a band of Hells Angels, Fonda delivers a speech that could’ve served as both a personal mantra and a manifesto for the youth of the ’60s.
“We wanna be free!” Fonda tells a preacher in the film. “We wanna be free to do what we wanna do. We wanna be free to ride. We wanna be free to ride our machines without being hassled by the man! And we wanna get loaded!”

Fonda produced “Easy Rider” and Hopper directed it for a meager $380,000. It went on to gross $40 million worldwide, a substantial sum for its time.
The film was a hit at Cannes, netted a best screenplay Oscar nomination for Fonda, Hopper and Terry Southern, and has since been listed on the American Film Institute’s ranking of the top 100 American films. The establishment gave its official blessing in 1998 when “Easy Rider” was included in the United States National Film Registry for being “culturally, historically, or aesthetically significant.”
In 1969, he told The Associated Press that, “As for my generation, it was time they started doing their own speaking. There has been too much of the ‘silent majority’ — at both ends of the generation gap.”
He did reflect later in a 2015 interview with The Hollywood Reporter that it may have impacted his career prospects: “It certainly put a nail in the coffin of ‘the next Dean Jones at Disney.'” 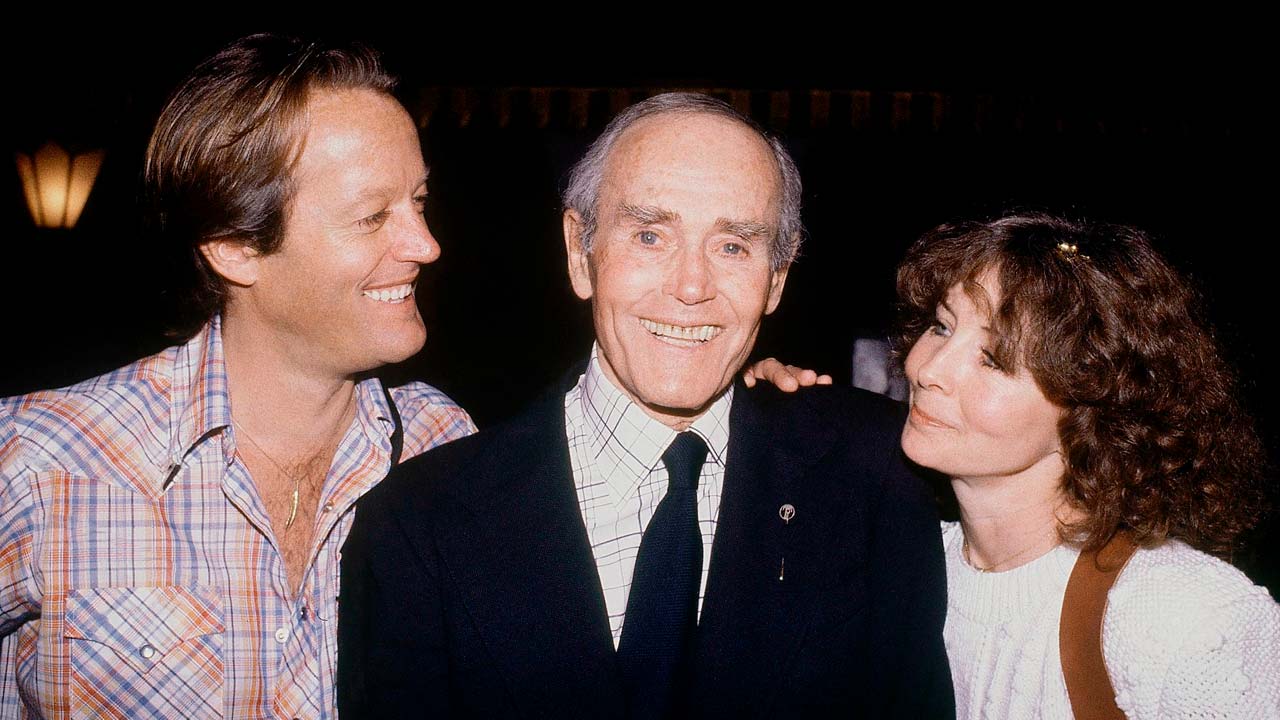 In this May 16, 1980, file photo, Henry Fonda, center, attends his 75th birthday with son Peter Fonda, left, and his wife, Shirlee Fonda. Peter Fonda, the son of a Hollywood legend who became a movie star in his own right both writing and starring in counterculture classics like “Easy Rider,” has died. His family says in a statement that Fonda died Friday, Aug. 16, 2019, at his home in Los Angeles. He was 79. (AP Photo/Randy Rasmussen, File)

Fonda’s output may have been prolific, but was not always well-regarded, which he was acutely aware of. But he said that “Ulee’s Gold,” which came out in 1997, was the “most fun” he’d ever had making a movie. He wore the same wire-rimmed glasses his father wore in “On Golden Pond,” although he said beyond that he was not channeling Henry Fonda in the performance. He lost out on the Oscar to Nicholson, who won for “As Good as It Gets.”
Nicholson said in his acceptance speech that it as an honor to be nominated alongside “my old bike pal Fonda.”
He remained prolific for the rest of his life with notable performances as the heel in Steven Soderbergh’s “The Limey,” from 1999, and in James Mangold’s 2007 update of “3:10 to Yuma.” He’d even play himself in an episode of the spoof documentary series “Documentary Now!” about life as “an Oscar Bridesmaid.”
Fonda is survived by his third wife, Margaret DeVogelaere, his daughter, actress Bridget Fonda, and son, Justin, both from his first marriage to Susan Brewer.
“In one of the saddest moments of our lives, we are not able to find the appropriate words to express the pain in our hearts,” the family said in a statement. “As we grieve, we ask that you respect our privacy.”
Related Topics:Captain Americacause of deathEasy RiderJane Fondalung cancerPeter Fondapop culture
Up Next