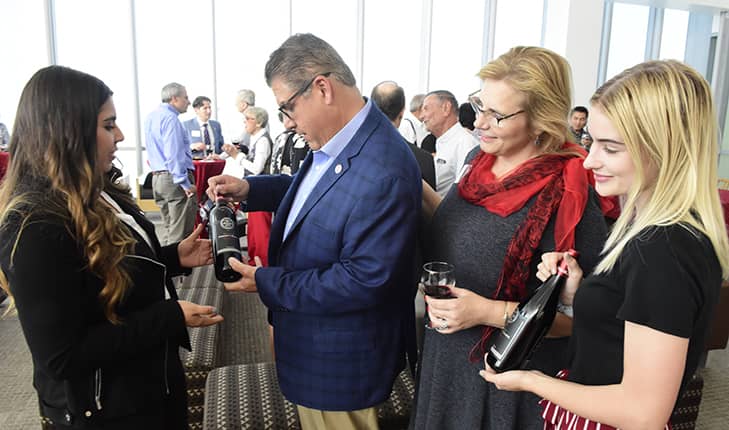 By Lisa Boyles
FresnoStateNews.com
There’s something special in this Valley soil. That’s why Natasha Milanez became an ag business major, in hopes of staying closer to home and family after she transitions from college student to graduate next year.
“I’m very close to my mom and I don’t want to move away from the Central Valley,” said Milanez, who’s from Dinuba.


“We wanted to make wines from the Central Valley that were super premium. This was a big thing for us, taking Fresno State grapes and producing wines at that quality level.” — winemaker Tom Montgomery
One project she has been involved with during her time studying with Fresno State’s Department of Viticulture and Enology is especially meaningful. The Fresno State Winery has released two limited-edition President’s Reserve wines in honor of President Joseph I. Castro, a Hanford native. Milanez is involved in the marketing efforts for those wines.
“It’s an honor to work on this,” said Milanez, who works at the winery. “I feel like being involved with something that’s important, not just to the winery but to the president is amazing … This is not just promoting Fresno State Winery, it’s promoting Fresno State in general. The more people hear about us, it will help us expand the presence of our wines not just in Fresno but throughout California.”

The 2017 Barbera President’s Reserve and 2017 Syrah President’s Reserve were unveiled during an invitation-only reception earlier this week.
“We are proud of our president and we’re very pleased that we were able to have a chance to show our gratitude to him by putting a President’s Reserve together,” said Kevin Smith, the winery’s marketing director. “These two wines, Barbera and Syrah, represent the very best from our enology program and are the result of our students’ hard work in the winery over the past year.”
The Barbera, a deep ruby red wine with aromas of plum, black cherry, dried fruit and flavors of cherry and berry, is President Castro’s favorite wine varietal. The Syrah, a dark purple-red with strawberry and pomegranate aromas and flavors of berry and black cherry, turned out so nice that it was included in the President’s Reserve line. 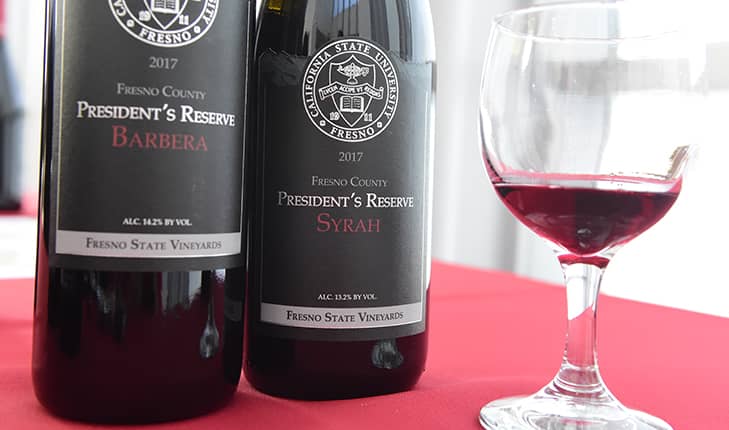 The limited-edition President’s Reserve wines. Students are involved in every step of making and selling the university’s wines. (fresnostatenews.com)

This is the first time the winery has produced a President’s Reserve in honor of President Castro. A Chardonnay and Primitivo were released in 2001 to honor President John D. Welty. Students later commemorated Welty’s tenure and celebrated his retirement with a “Legacy Chardonnay.”
Both wines — bold, table wines — are student-made with estate grapes grown on Fresno State’s 120-acre campus vineyard and aged in French and American oak barrels in the campus winery for 18 months.
“We wanted to make wines from the Central Valley that were super premium,” said winemaker Tom Montgomery, a Fresno State alumnus and Sanger native. He worked for many award-winning wineries in Napa and Sonoma before returning to Fresno State in 2017. “This was a big thing for us, taking Fresno State grapes and producing wines at that quality level.”


“(Students) grow the grapes, they crush them and ferment them. They go through the process of finishing and bottling, blending. And then they actually get involved in promotion and marketing and sales.” — winemaker Tom Montgomery

Students Participated Every Step of the Way

Students are involved in every part of the process, from growing and crushing the grapes, to blending and finishing, bottling and the marketing to sell the products.
“What sets Fresno State apart is that our students are involved in everything. So what they’re going to do in the real world they do here,” Montgomery said. “They grow the grapes, they crush them and ferment them. They go through the process of finishing and bottling, blending. And then they actually get involved in promotion and marketing and sales.”

Fresno State houses the nation’s first commercial winery on a university campus. Founded in 1997, it has won more than 600 wine competition honors.
Keely Ryan, a senior enology major, loves the hands-on aspect of working and studying in the winery, and especially on the President’s Reserve wine launch.
“To have the president be involved in our area of study makes us proud as students,” Ryan said.

Where to Buy the President’s Reserve Wines