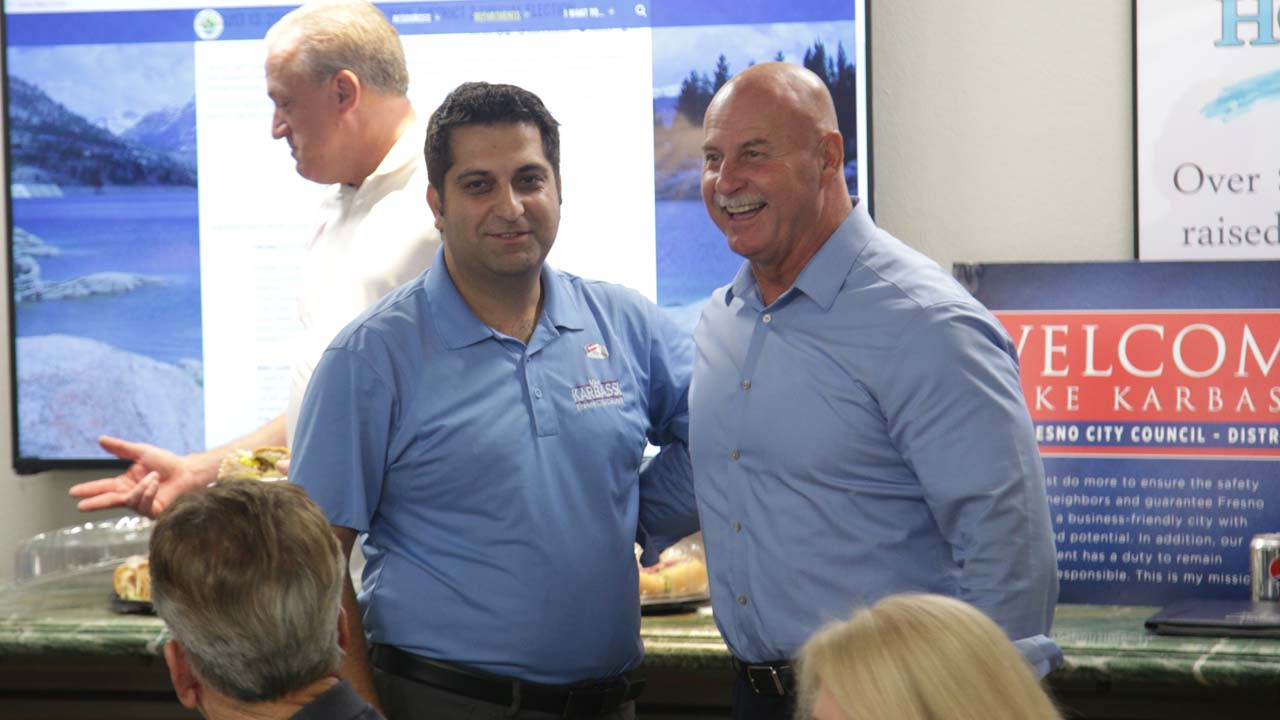 Jump to Results ↓
Perhaps the most joyous person in the room at an election return party was the elder Mike Karbassi.
Neither a cane nor a stoop in his walk prevented him to going around from guest to guest telling them how proud he was of his son, the younger Mike Karbassi, and presumptive winner of a special election to serve as northwest Fresno’s city councilmember.
The elder Karbassi relayed stories about how his son always worked hard, starting at the age of seven, at his Persian rug store. Apparently, that hard work never ceased.
“It’s been a long nine months. We kept it clean. I walked a lot. You go day after day and you’re working hard. But, you never know. It is up to the voters to decide. I’m really honored the voters appreciated the hard work. They graced me this opportunity to serve them. I’m very humbled right now,” the councilman-elect said.

Karbassi’s campaign team expects him to be sworn in by Labor Day (Sept. 2 ). There is a council meeting on Thursday (Aug. 15), but the election won’t be certified by then. The next meeting after that is Aug. 22, followed by a nearly month-long layoff until Sept. 19.
For Karbassi, his first order of business will be handling a backlog of constituent issues. The District 2 seat has been vacant since April, when its previous occupant, Steve Brandau, resigned after winning a special election of his own for a seat on the Fresno County Board of Supervisors.
Until he officially takes his seat, Karbassi says he will meet with city department heads and learn as much as he can.

The election saw five active candidates. Karbassi outraised them financially, taking in $162,938 as of the last reporting date.
He locked up key endorsements early from the likes of police chief (and 2020 mayoral candidate) Jerry Dyer, Sheriff Margaret Mims, and Assemblyman (and former mayor) Jim Patterson.
Karbassi built a coalition that crossed traditional party lines. Although he is a registered Democrat, Karbassi won the support of Fresno’s conservatives. He took a pro-law enforcement, pro-business stance that helped make him the front runner.
One campaign staffer says Karbassi absorbed the energy of the campaign from his opponents early and kept the momentum going.
“Now the work begins,” Karbassi said.

Unofficial election night results showed Karbassi with 59% of the vote with all 26 precincts reporting. The top-three saw Lawrence Garcia with 16%, and Jared Gordon at 11%.
The results tallied 8,164 total votes, with about 7,100 coming in from vote-by-mail. The preliminary turnout was 18%.
“Congratulations to Fresno’s newest council member, Mike Karbassi. Mike was a tireless campaigner, and I hope he will be equally tireless in representing the people of northwest Fresno. I wish him the best of luck,” Gordon told GV Wire.
Karbassi noted he was once in his opponents shoes, losing the 2008 council race for the same seat to Andreas Borgeas (now a state senator). Karbassi’s message to the others: “Keep going. Tomorrow is a new day.”
With the win, Karbassi will assume Brandau’s term which runs through January 2021. The next election for the term beyond that takes place March 2020, less than seven months from now.

9:36 p.m.
The final results from tonight’s District 2 Fresno city council race are in. With 100% of precincts reporting, Mike Karbassi has won outright in a field of 5 candidates with 59% of the vote.

9:30 p.m.
The Fresno County Elections Department has now posted results with 69% of precincts reporting. The results have remained the same with Mike Karbassi holding at 59% to Lawrence Garcia’s 16%. The percentage results for the remainder of the field remain the same, as well.

8:37 p.m.
No results have yet been reported from polling places. Those returns are expected within the next hour. If the vote trend continues when precincts report, Mike Karbassi will avoid a run-off and win the District 2 seat outright.

8:13 p.m.
As soon as the first results were posted, Mike Karbassi and his campaign team let out cheers and hollers.
“It’s over!” Karabassi’s campaign manager Jason Carns said at a small return-watching gathering at the Granville Homes offices. 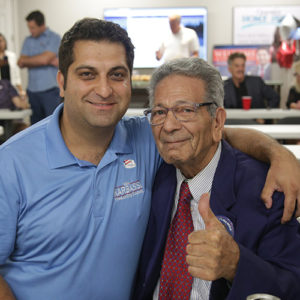 Mike Karbassi and his father react to the night’s initial vote totals.

Karbassi shook hands with his party guests, the likes of Chief Jerry Dyer, SCCCD Trustee Annalisa Perea, District 4 council candidate Nathan Alonzo and others.
His team feels the results will hold up.
The first poll returns show 7,000 voters, approximately the same number of turned-in mail ballots. The numbers do not reflect day-of voting at the precincts.

8:07 p.m.
Mike Karbassi has jumped out to a commanding lead in the District 2 race. With the first wave of mail-in ballots counted, Karbassi is sitting atop the field with 59% of the vote. He is followed by Lawrence Garcia at 16%. Jared Gordon is in the third spot with 11% of votes counted.

Voters are going to the polls today — though most have returned ballots by mail — in a special election to chose a successor to Steve Brandau on the Fresno City Council.
Brandau left office in April after winning his own special election to the Fresno County Board of Supervisors. The winner of the District 2 race will fulfill the remainder of Brandau’s term, which ends in January 2021.

Five candidates have been actively campaigning: Mike Karbassi, Lawrence Garcia, Jared Gordon, Oscar Sandoval, and George Herman.
A sixth name, Phil Arballo, also appears on the ballot. But, he abandoned his campaign to run for Congress. However, his decision came after the deadline to remove his name.

Polls Are Open Until 8 p.m.

Polls are open until 8 p.m. Voters can find their polling place using this link.
Those eligible to vote who have not registered can still do so through election day by requesting conditional voter registration at the county elections office.
If a candidate fails to receive a majority of votes (at least 50% plus one), the top two will face off in a Nov. 5 runoff.
Perhaps in anticipation of a runoff, none of the candidates is throwing a lavish party tonight. They are planning small, private events, if not just staying home altogether.

Mail Ballots Must Be Postmarked by Today

Even if this evening’s returns show a candidate winning the election outright, it will be a few weeks before he is sworn into office. Both city clerk Yvonne Spence and city council president Paul Caprioglio say the soonest it could happen is mid-August. Caprioglio says he wants to go by the rules, and wait for the county clerk to certify the election before swearing in a new council member.
Through Monday, voters had returned 7,106 ballots by mail. There are 44,476 registered voters in the district. By law, ballots received by mail up to three days after the election (through Friday) will be counted, as long as they are postmarked by Election Day. Mail ballots can also be hand-delivered to any polling place before 8 p.m.

Election night results are semifinal and should not be considered official. All candidate rankings are dependent on current vote counts and do not constitute any kind of ruling on the outcome.

Fresno County data is reported from the Registrar of Voters.