“As the campaign has come to life, I have realized that I need to be directing my available time and energy into the health of my family rather than into the campaign,” Balch wrote in an email to his supporters. “I’ve been in to win, and winning would require more time than I am able to commit going forward. Therefore, I am discontinuing our campaign at this time.”

In the email, Balch also offered encouraging words to others who might be thinking about running for mayor.

“I have truly enjoyed campaigning and getting to know people from all around Fresno who care about our city’s future. In its next mayor, Fresno must have a leader committed to lifting up Fresno’s people, neighborhoods, and economy. Prospective candidates have nearly four more months to file papers and run.”

Will Brand’s Veto Be Overriden?

After five years of a mayor not executing a veto, Brand in 2019 issued three. And, he may suffer his first veto override at Thursday’s council meeting.

If the council is successful, it would be the first veto override since 2007. The council reversed then-mayor Alan Autry’s plan to save his downtown riverwalk proposal. That same year, the council overrode a veto to protect workers’ compensation rights for public safety employees, and also restored funding for Storyland and Playland.

Last week, Brand vetoed the council’s decision to ban retroactive raises for employees on the way out of City Hall. That passed with a 6-0 vote.

The council needs five votes to override the mayor.

In his Aug. 5 veto message, Brand said the council’s action went too far.

Support for the original bill is unlikely to change. The override measure is sponsored by Miguel Arias and Garry Bredefeld. Esmeralda Soria said she still supports the original bill as well. So does Nelson Esparza.

Luis Chavez offered a more nuanced tone, saying he is open to all options.

Brand issued two other vetoes this year that were sustained: a May veto on the allocation of office space — which was eventually worked out between the administration and council, and a July veto on the budget involving the “Advance Peace” initiative. 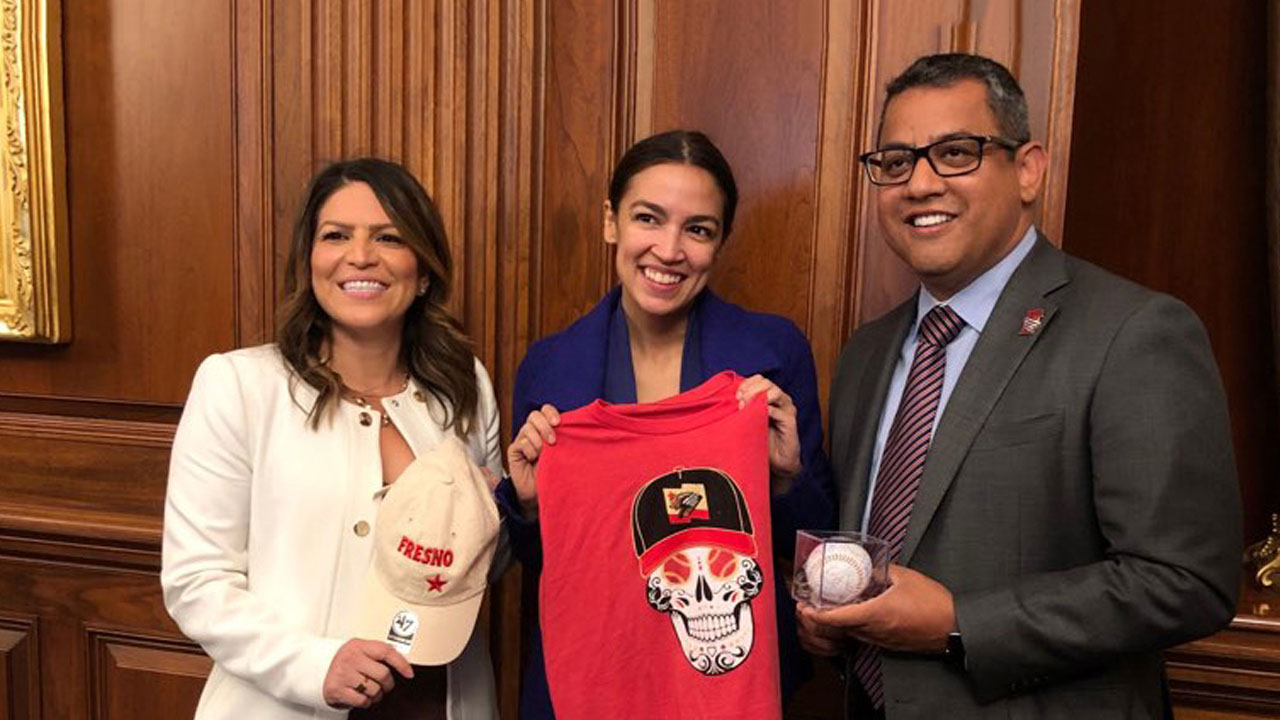 Rep. Alexandria Ocasio-Cortez, center, poses with Fresno Councilmembers Esmeralda Soria, left, and Miguel Arias, along with Fresno Grizzlies merchandise they gave to the New York congresswoman, on Wednesday, June 5, 2019, at the U.S. Capitol in Washington, D.C.

In June, Fresno councilmembers Miguel Arias and Esmeralda Soria booked a last-minute trip to Washington, D.C. They said it was to lobby congressional leaders on issues important to the Valley such as water and immigration.

The trip became best known for a photo op with New York Congresswoman Alexandria Ocasio-Cortez, replete with Fresno Grizzlies swag. That followed the Memorial Day mishap where the team inadvertently disparaged AOC via a video attempting to inspire patriotism.

According to documents provided by the city in response to a Public Records Act request, Arias and Soria charged $882.16 each for the flight, purchased just a day before their two-day trip in early June.

The taxpayer cost for two rooms at the Washington Court Hotel: $413 apiece.

Perhaps others bought their meals for them. The only other expense was a charge from the hotel for $26.38, listed as “facility fees.”

For five years, developer Noyan Frazier Capital planned a mixed-use building with retail on the first floor and housing above it in downtown Fresno. Known as the South Stadium Project, it is an empty lot at the western intersection of Fulton and Inyo streets, adjacent to Chukchansi Park.

Now, the developer is asking the city to fill a shortfall, to the tune of $659,298. The request goes to the Fresno City Council on Thursday.

“It goes back to getting an acceptable rate of return. We’re putting equity out of our own pockets into this project,” Noyan said. The project would also utilize funding from a number of state funds and tax credits.

Of the 54 housing units, 20% would set aside as affordable housing.

Technically, the council will act as the Housing Successor to the former Redevelopment Agency, the legal entity that disperses money from the former RDA (that Gov. Jerry Brown shut down in 2011).

Councilwoman Esmeralda Soria said she will recuse herself from voting based on her relationship with the other namesake developer, Terance Frazier.

Noyan said the project remains on track to meet its timeline, with groundbreaking anticipated for spring 2020.

In California, citizens draw the political boundaries for the state Legislature and Congress.

The deadline to apply for the Citizens Redistricting Commission has been extended to Aug. 19.

Power California, an organization focused on engaging young voters of color, will hold a meeting about how to apply to join the commission.

Valley residents this is important! We need new and fair political boundaries without special interests. Applicant diversity is really low this cycle and it is not representative of California or the Central Valley. pic.twitter.com/jTYuTE5WEC