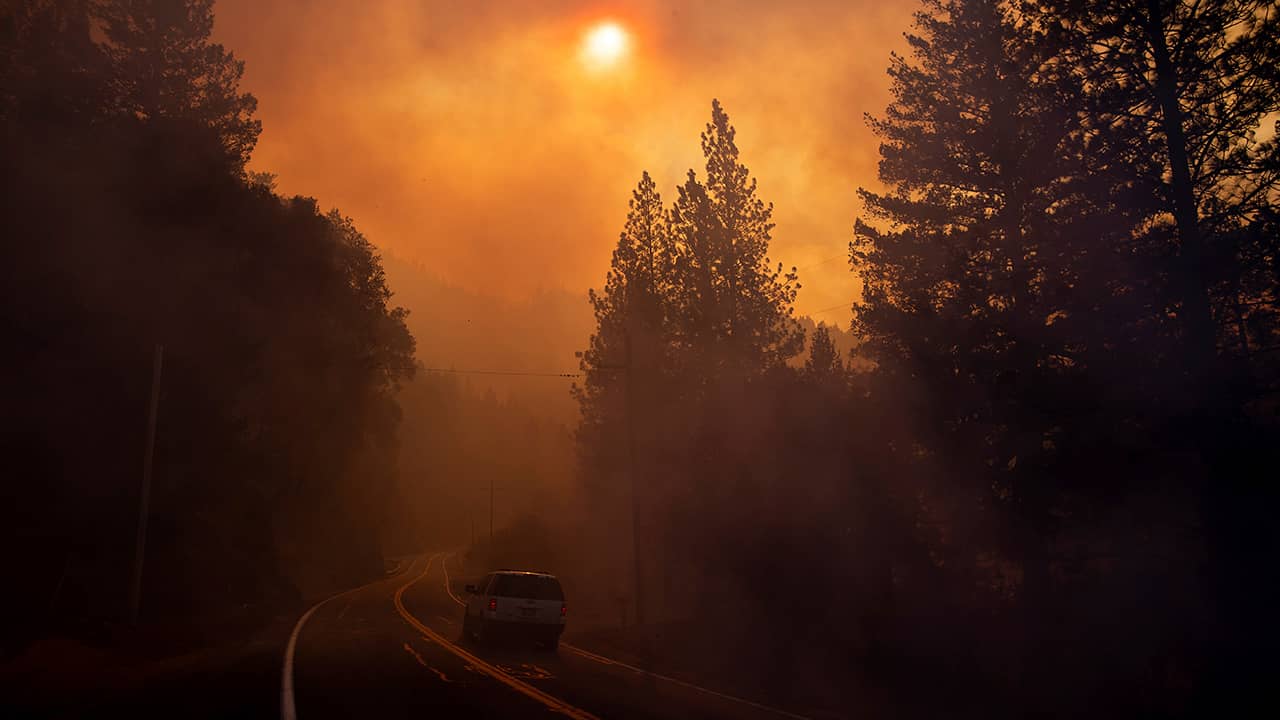 KINGS CANYON NATIONAL PARK — The thick scent of smoke hung in the midday air when a trail along the Kings River opened up to an ominous scene: flames in the trees and thick gray smoke shrouding canyon walls.
Firefighters were on the job. In fact, they had started the blaze that chewed through thick ferns, blackened downed trees and charred the forest floor. The prescribed burn — a low-intensity, closely managed fire — was intended to clear out undergrowth and protect the heart of Kings Canyon National Park from future wildfires that are growing larger and more frequent amid climate change.
The tactic is considered one of the best ways to prevent the kind of catastrophic destruction that has become common from wildfires, but its use falls woefully short of goals in the U.S. West. A study published in the journal Fire in April found prescribed burns on federal land in the last 20 years across the West has stayed level or fallen despite calls for more.
Prescribed fires are credited with making forests healthier and stopping or slowing the advance of some blazes. Despite those successes, there are plenty of reasons they are not set as often as officials would like, ranging from poor conditions to safely burn to bureaucratic snags and public opposition.
After a wildfire last year largely leveled the city of Paradise and killed 86 people, the state prioritized 35 brush and other vegetation-reduction projects that could all involve some use of intentional fire, said Mike Mohler, deputy director of the California Department of Forestry and Fire Protection.
Despite the push for more burns, there are disastrous reminders of prescribed fires blowing out of control — such as a 2012 Colorado burn that killed three people and damaged or destroyed more than two dozen homes.

Overcoming public fears by teaching about “good smoke, bad smoke, out-of-control fire and prescribed fire” is just one hurdle before firefighters can put match to kindling, Mohler said.
“It’s the difference between fire under our terms and fighting fire on Mother Nature’s terms,” he said.
It can take years to plan and clear federal, state and local environmental and air pollution regulations. A burn among giant sequoias once took 13 years to accomplish, said Michael Theune, a spokesman for Sequoia and Kings Canyon National Parks.

Opponents cite the threat to wildlife and release of greenhouse gases. In California, some environmentalists opposed intentional burns because they can destroy natural drought-tolerant shrubs and replace them with flammable invasive weeds and grasses.

Over Two Days, the Fire Crew Blackened the 218 Acres Targeted

Four years ago, Cedar Grove in the bottom of Kings Canyon escaped a massive lightning-ignited fire — flames burned up to where periodic prescribed burns had thinned undergrowth. About $400 million in property, including employee housing, lodging, campgrounds and a water treatment plant, was spared, said Theune, the parks spokesman.
Last winter was a very wet one in California, and that left brush and vegetation less volatile through spring. In Kings Canyon, firefighters returned in June to burn different segments along a narrow strip of pines, cedars and manzanita between the raging Kings River and a road that ends in the canyon.
With other firefighters standing by in case embers escaped, a half-dozen members of the park’s Arrowhead Hot Shots methodically dripped flame from gas-and-diesel torches to ignite dry pine needles, twigs and other accumulated material.
A mosaic-like pattern of fire crept through grasses, pine cones and dead branches. Downed ponderosa pines became occasional flashpoints. Teams with hoses doused flames that threatened to climb living trees.
Ideally, Sequoia and Kings Canyon parks would burn 10,000 or more acres a year, Theune said. The annual target is about a fifth of that, and the actual acreage burned often falls far short of that goal.
Over two days, the fire crew blackened the 218 acres targeted, doubling the total area burned last year in the two parks.
But it was merely 10% of the parks’ annual goal and just a tiny fraction of land in the U.S. West that could be treated with prescribed fire.