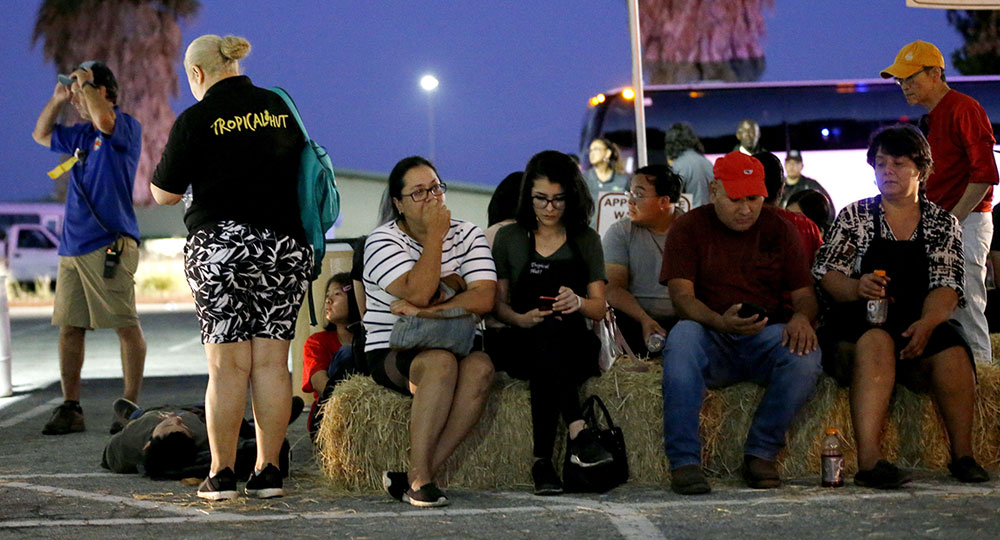 GILROY — A 6-year-old boy described by his grandmother as always kind and happy was one of three people killed and at least 15 others injured when a gunman heard to be “really angry” opened fire during the closing moments of the Gilroy Garlic Festival.

‘My Son Had His Whole Life to Live’

Some witnesses reported a second suspect, Smithee said, but it was unclear whether that person was armed or simply provided assistance. A manhunt continued late into the night.
A 6-year-old boy was one among those killed, his father said. “My son had his whole life to live and he was only 6,” Alberto Romero, the father of Stephen Romero told NBC Bay Area. “That’s all I can say.”
The boy’s grandmother, Maribel Romero, told ABC7 News she searched several hospitals before learning he had died. She said he was “always kind, happy and, you know, playful.”
Smithee called the scene at the festival a “nightmare you hope you never have to live.” 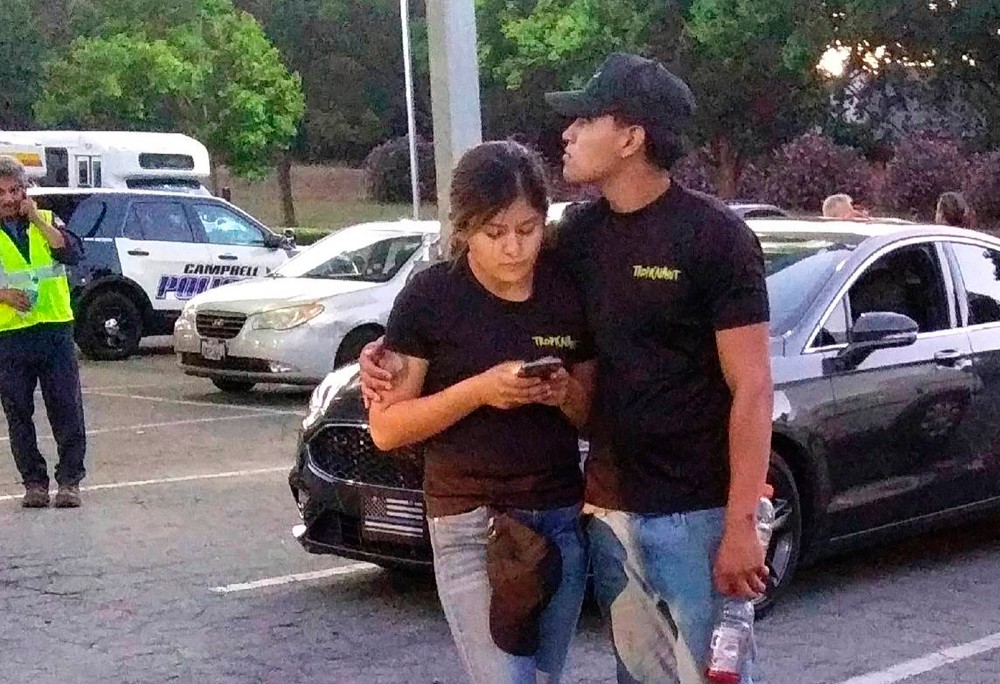 A young couple embrace at a parking lot after a shooting Sunday at the Gilroy Garlic Festival. (AP Photo/Thomas Mendoza)

The wounded were taken to multiple hospitals, and their conditions ranged from fair to critical, with some in surgery Sunday night. At least five were treated and released.
The Gilroy Garlic Festival features food, cooking contests, and music. It’s a decades-old staple in the agricultural city of 50,000 about 100 miles west of Fresno, and normally a sea of tranquility for families. Security is tight — festival-goers pass through metal detectors and their bags are searched.

On Sunday, the band TinMan was starting an encore with the song “We’re an American Band” when the shooting started.
Singer Jack van Breen said he saw a man wearing a green shirt and grayish handkerchief around his neck fire into the food area with what looked like an assault rifle. Van Breen and other members of the band dove under the stage.
Van Breen, from nearby Santa Clara, said he heard someone shout: “Why are you doing this?” and the reply: “Because I’m really angry.”
Their audience began screaming and running, and the five members of TinMan and others dove under the stage.
Van Breen’s bandmate, Vlad Malinovsky of Walnut Creek, said he heard a lot of shots and then it stopped. Later, law enforcement came by and told the band members and others hiding with them to come out with their hands up.

Taylor Jackson was working at a booth drawing caricatures of festival-goers when she heard gunfire, saw people running and “ran for the hills.” She said her boss ran in the opposite direction. Several hours later, Jackson was at a reunification center trying to get information on her whereabouts.
Donna Carlson of Reno, Nevada, was helping a friend at a jewelry booth when “all of a sudden it was pop, pop, pop. And I said, ‘I sure hope that’s fireworks.'” She got on her hands and knees and hid behind a table until police told her it was safe to leave.
In a tweet, California Gov. Gavin Newsom called the bloodshed “nothing short of horrific” and expressed appreciation for the police response.

This is nothing short of horrific. Tonight, CA stands with the Gilroy community. My office is monitoring the situation closely. Grateful for the law enforcement’s efforts and their continued work as this situation develops. https://t.co/GrtHjtCEz7

Stanford Medical Center had two patients being treated from the shooting at the Gilroy Garlic Festival, spokeswoman Julie Greicius said. She had no details on their injuries or conditions. Santa Clara Valley Medical Center received five victims, spokeswoman Joy Alexiou said. She also had no information on their conditions.
Video posted to social media showed people running in terror as shots rang out.

ATF Agents at the Scene

Evenny Reyes of Gilroy, 13, told the Mercury News that she spent the day at the festival with her friends and relatives.
“We were just leaving and we saw a guy with a bandanna wrapped around his leg because he got shot. And there were people on the ground, crying,” Reyes said. “There was a little kid hurt on the ground. People were throwing tables and cutting fences to get out.”
Reyes said that she didn’t run at first because the gunshots sounded like fireworks.
“It started going for five minutes, maybe three. It was like the movies — everyone was crying, people were screaming,” she said. 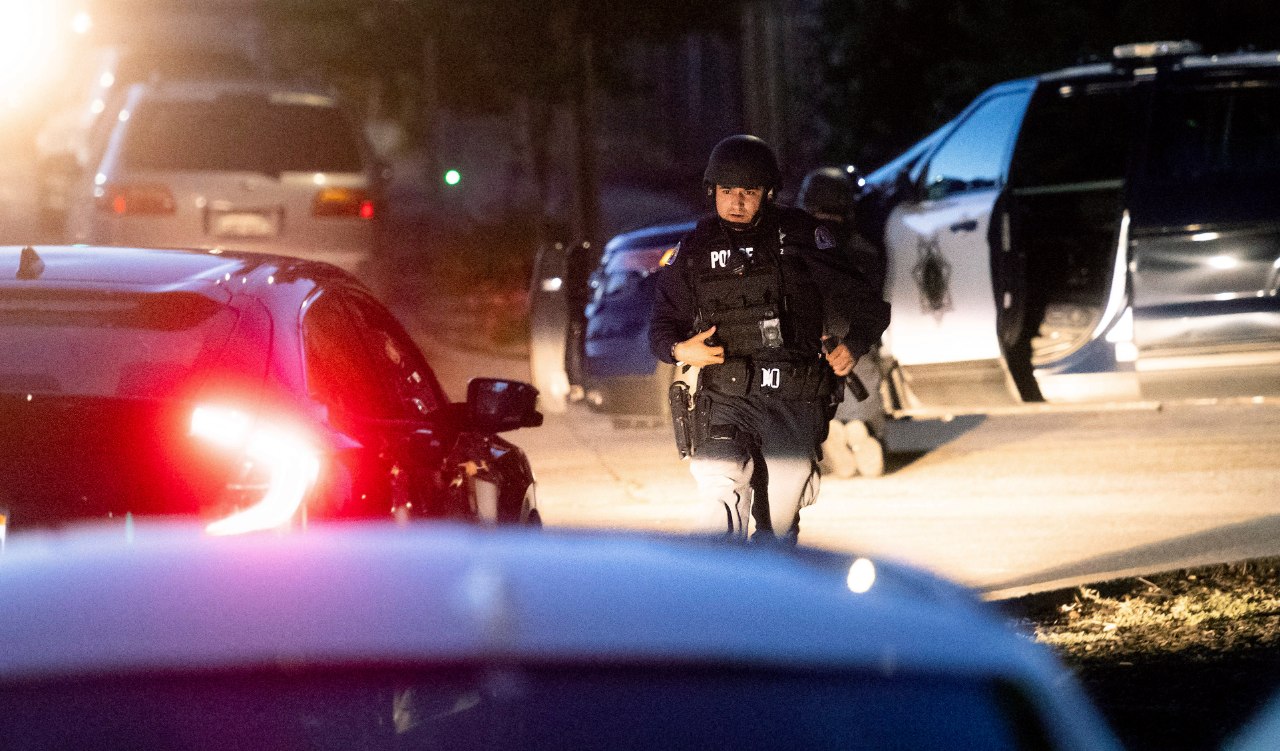 Police remain on the scene after a deadly shooting Sunday at the Gilroy Garlic Festival. (AP Photo/Noah Berger)

Agents from the federal Bureau of Alcohol, Tobacco, Firearms and Explosives responded to the scene of the shooting.
The Gilroy Police Department on its Twitter account issued a statement saying: “The hearts of Gilroy PD and entire community go out to the victims of today’s shooting at the Garlic Festival.”
Smithee said the festival is a source of pride for the community and that thousands donate their time to make it a success.
“It’s incredibly sad and disheartening that an event that does so much good for our community has to suffer from a tragedy like this,” he said.
Related Topics:crimeGilroyGilroy Garlic Festivalgun violenceSanta Clara Countyshooting
Up Next

How Does Amazon Deliver So Fast? This Video Shows How.