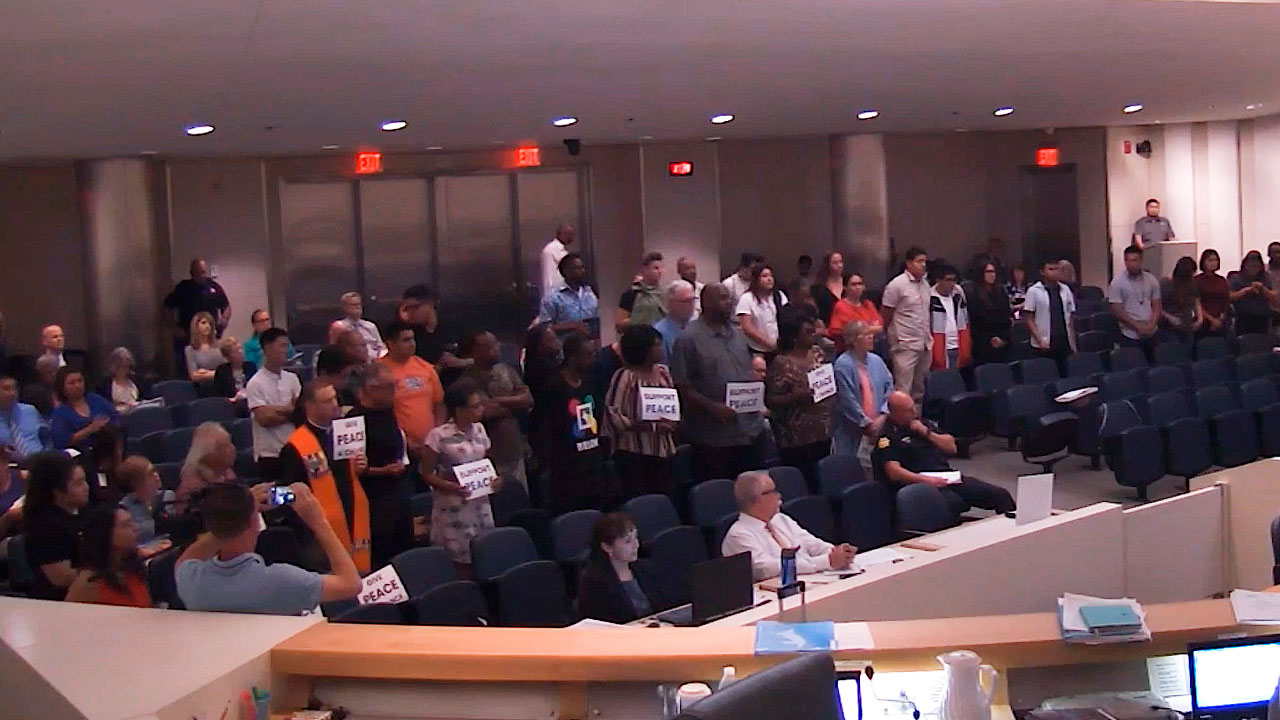 A renewed effort to convince gang members to become law-abiding citizens is coming Fresno’s way.
What that initiative looks like, how much it costs, and who funds it, however, will be decided over the next three months.

That was the compromise hammered out by the Fresno City Council at Thursday’s meeting following public comments from police chief Jerry Dyer and Advance Peace advocate Aaron Foster.

Foster Knows the Pain of Losing Loved Ones

Foster, a community organizer with Faith in the Valley-Fresno, has lost two children to gun violence.
One of them, Aaron Foster III, ran with gangs. But Kayla Foster, a Central High School senior who steered clear of gang involvement and encouraged friends to do likewise, was murdered two years ago on Memorial Day. The case remains unsolved.
Kayla’s death inspired her father to call for an end to the violence plaguing Fresno at a candlelight vigil a few days later in southwest Fresno.
“It shouldn’t just be my baby, it shouldn’t be anyone’s baby that’s bleeding in these streets,” Foster said that night. “Eight people that I know die every year, at least eight.”
There have been many calls for city leaders and community members to team up against gun violence after the killings of innocents like Kayla.
Not just in Fresno, but in cities across America, it’s become a ritual. A life snuffed out by bullets. Followed by anger, pleadings, and promises to do something meaningful.
But the killings, the tears, and the families forever tortured by the loss of loved ones keep piling up.

The difference this time, perhaps, is that Foster’s resolve hasn’t waned.
He and other Advance Peace advocates came to Thursday’s meeting seeking $300,000 to seed a violence-reduction program augmented by private funds. Under the program, community members talk to gang members about changing their behavior and seeking gainful employment. The program connects those willing to change to therapy, education, and workforce training.
But there’s a controversial component to Advance Peace: Participants who achieved defined goals receive stipends to augment their income. In Richmond, where Advance Peace is headquartered, individuals receive $300 to $1,000 monthly.
Some opponents have described it as gangsters getting paid not to shoot people. On Thursday, councilman Garry Bredefeld called Advance Peace “sheer lunacy,” adding that the best way to keep people safe is bringing back tough-on-crime laws such as Three Strikes.
But councilman Luis Chavez rebutted the program’s critics: “It’s not the city giving money for not shooting folks.”

Another example why CA is going off the rails- Paying criminals to be nice… https://t.co/VH5jJSZzPv

After the meeting, Foster called the stipends “support while you get your feet on the ground.”

Dyer made clear that while he supports efforts to cut violence, he doesn’t want taxpayer money going to gang members. And while Advance Peace backers point to success in Richmond, the chief said that Stockton, which has implemented a pilot program, is seeing an increase in homicides and other violent crimes.
Dyer also told the council about two earlier gang and violence reduction programs — Operation Ceasefire Fresno and the Mayor’s Gang Prevention Initiative.
Ceasefire centered on telling gang members they were on law enforcement’s radar and spelling out the consequences if they were arrested, prosecuted and sent to prison. During these “call-ins,” gang members also learned about the support they’d get if they went straight. The program, which was designed by the Department of Justice and endorsed by California officials, proved effective early on.
But, Dyer said, California cities lost their “hammer” to convince gang members to show up to call-ins with the adoption of Assembly Bill 109, which emptied out the state’s overcrowded prisons, and changed criminal resentencing laws. As for the gang prevention initiative started during the administration of Mayor Alan Autry, it was gutted by the Great Recession.
Dyer told the council the most effective strategy is to aggressively pursue gang members breaking the law while also funding gang prevention programs and “giving gang members the opportunity to get out of the gang life.”
In defense of the Advance Peace proposal, Foster said, “The police don’t have all the answers, and we don’t have all the answers. But this isn’t about the chief or about me. Advance Peace isn’t a cure-all, but it’s part of the solution.”

A Compromise and a Win for Advance Peace

And thus a compromise was born.
The council passed councilman Miguel Arias’ proposal to set aside — but not approve — $200,000 for the program in the fiscal year 2020 budget while allowing Dyer, Foster, and others 90 days to collaborate on a Fresno-specific version of Advance Peace.
During and after the discussion, Foster and Dyer hugged.
Leaving the council chambers, Foster raised his right arm, signaling victory and the fact that Advance Peace now has a voice in addressing multigenerational gang membership and gun violence.