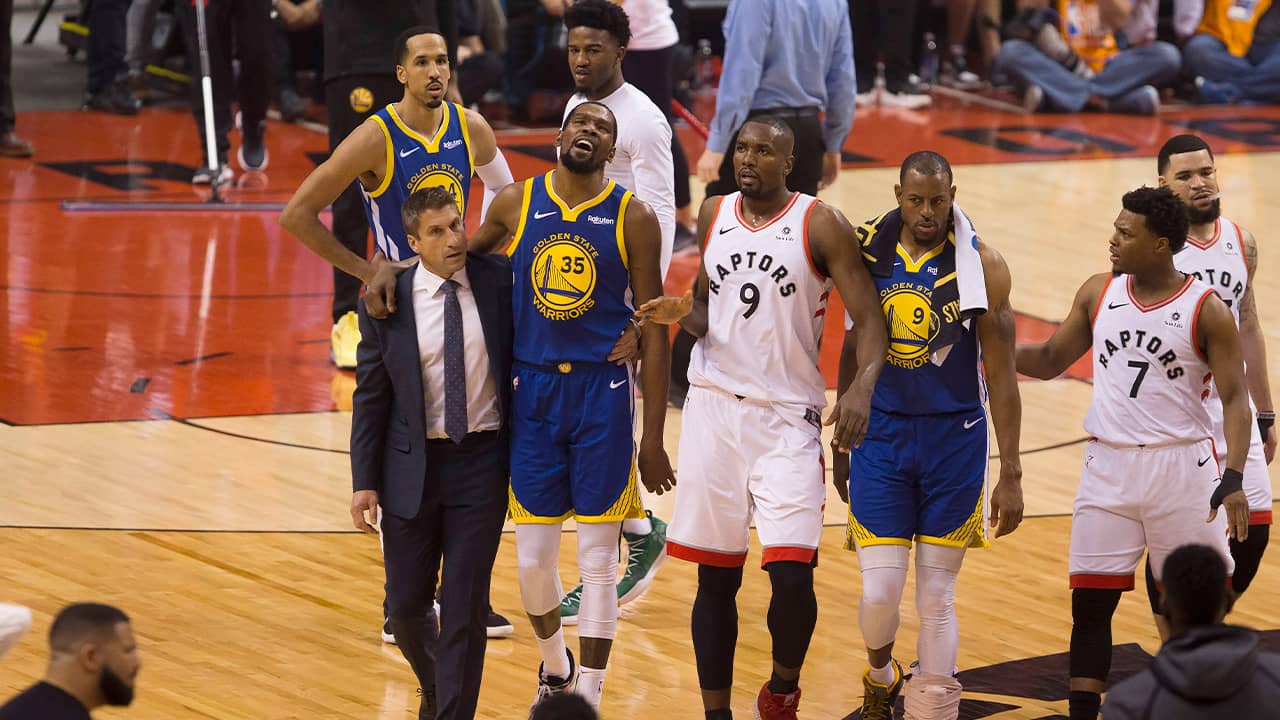 OAKLAND — This was already going to be a summer filled with fireworks in the NBA.
Nothing has changed.
Kevin Durant’s Achilles injury, the severity of which isn’t yet confirmed, means he probably won’t be able to play much — if any — next season. But this is a testament to how much he overshadows much of the NBA landscape: Durant will still likely dictate how the free-agency dominoes fall this summer.

Durant could exercise his $31.5 million player option and stay with the Warriors, and that’s likely going to be his worst-case financial scenario. He could opt out and sign a longer deal to stay in the Bay. Or he could opt out, sign elsewhere and start collecting massive checks from either the New York Knicks or Brooklyn Nets or Los Angeles Clippers or someone else.
Kyrie Irving’s decision could hinge on what Durant does. Kawhi Leonard’s decision could be affected by what Durant does. How the Knicks, Nets, Clippers, Dallas Mavericks, Los Angeles Lakers, Atlanta Hawks and all the other teams who have cap space will start spending their money on June 30 … it all will be determined, at least on some level, by what Durant does.
If he stays in Golden State, that’s more money for everyone else.
If he hits the open market, it’ll be about what team wants to gamble.

Kevin Durant’s NBA Finals Are Over

Here’s a tip to those teams that wanted Durant before he got hurt again in Game 5 of the NBA Finals. Golden State Warriors forward Kevin Durant reacts as he leaves the court after sustaining an injury during first-half basketball action against the Toronto Raptors in Game 5 of the NBA Finals. (Chris Young/The Canadian Press via AP)

So Few Players Are of Durant’s Caliber

The first decision is the medical course of action.
The financial course of action will be decided soon after.
All will not be lost next season for the team that has Durant on its roster. That team will apply for, and get, a disabled player exception that will allow them to sign someone else for probably about $9 million and not have that count toward the team’s cap.

That player won’t be of Durant’s caliber, because so few players are. But a year or so later, the team would have Durant.
There’s risk with any signing. And signing any player that will command so much of a team’s salary cap while facing a grueling rehab would seem particularly risky.
“He’s going to come back stronger though,” Warriors guard Klay Thompson said. “That’s the kind of fighter he is.”
The Nets swung a trade earlier this month to clear enough cap space for two max contracts this summer — and there’s no doubt that they would love Durant to take one of those spots, possibly alongside Irving. The Knicks have been mentioned as a hopeful in the Durant sweepstakes for months. The Clippers were expected to make a pitch for him as well. The Warriors surely want to keep him.

The chatter about Durant’s injury indicates it’s all a mystery now, although it really shouldn’t be.