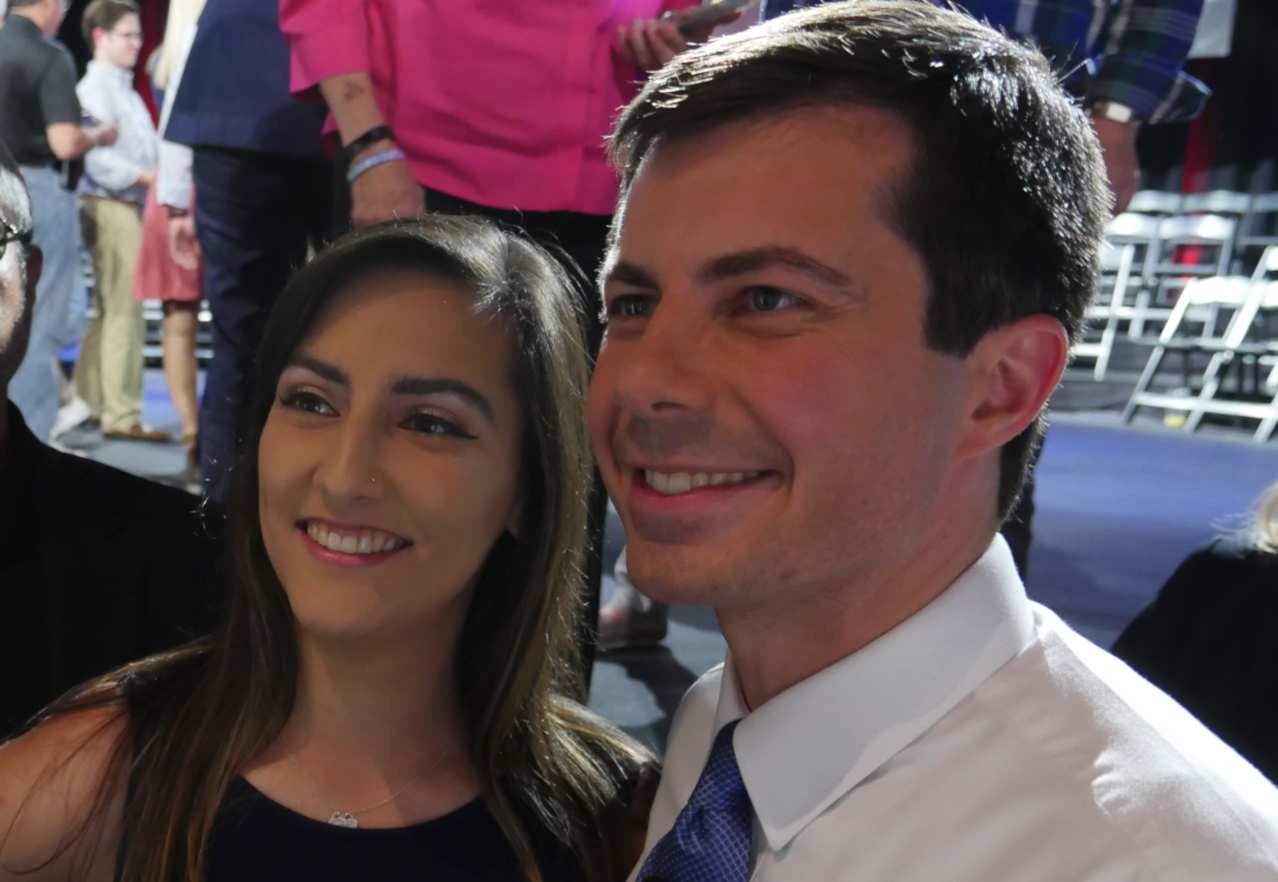 Mayor Pete Buttigieg delivered a progressive presidential agenda at two campaign stops in Fresno and to a national cable television audience Monday.
At a morning meet-and-greet at Tuolumne Hall, Buttigieg spoke to a receptive audience and took questions. He hit the progressive high notes — health care for all, the economy, abortion rights.
He made his appeal, using a reference of an icon to the right.
“And we might even wind up asking that question that Ronald Reagan famously asked. Are you better off than you were four years ago? Are you better off than you were 10 years ago? And I think for too many Americans, the answer is that we are no better off. And that’s why we’ve got to change the structures that perpetuate inequality in our economy and in our government,” Buttigieg said.

Later, Buttigieg appeared at a live “Hardball with Chris Matthews” airing at Fresno State. He supported the impeachment of Donald Trump, affordable college, and a $15 per hour minimum wage.
As he shook hands after the show went off the air, he spotted a friend — Ashley Swearengin, a former Fresno mayor. The two chatted for a moment. Swearengin said she knew Buttigieg from when she led Fresno not too many years ago.
Buttigieg compared Fresno to the city he’s mayor of — South Bend, Indiana.
“Fresno is really welcoming. We had a great time here, I’m looking forward to coming back. There are so many communities like Fresno, that maybe don’t feel like they are part of the conversation when people talk about when they think of when they think California. It reminds me of home, both the challenges and opportunities in a community like this,” Buttigieg told GV Wire.

The audience lined up early at Fresno State, snaking around the Speech Arts Building. Smartly, they made sure the line stayed in shaded areas.
Buttigieg supporters filled every seat in the house, with about a hundred more on stage behind host Matthews and the upstart candidate.
Matthews asked his “hardball” questions on whether he would impeach Trump (yes, saying Trump deserves impeachment), what he would say to Russian president Vladimir Putin (“don’t mess with our elections”) and if he ever fired a gun while serving in Afghanistan (Buttigieg said no, but there were some scary times).
A clip played of Buttigieg asking a question of one-time presidential contender Dick Gephardt at a 2003 Hardball townhall at Harvard. Then, Gephardt appeared via satellite from Santa Rosa, California, touting Buttigieg as a legitimate contender. Buttigieg graduated from Harvard in 2004.
Watch clips of Buttigieg on “Hardball” via MSNBC.
MSNBC will air a live town hall with Democratic presidential candidate Sen. Elizabeth Warren moderated by Chris Hayes on Wednesday night in Fort Wayne, Indiana.