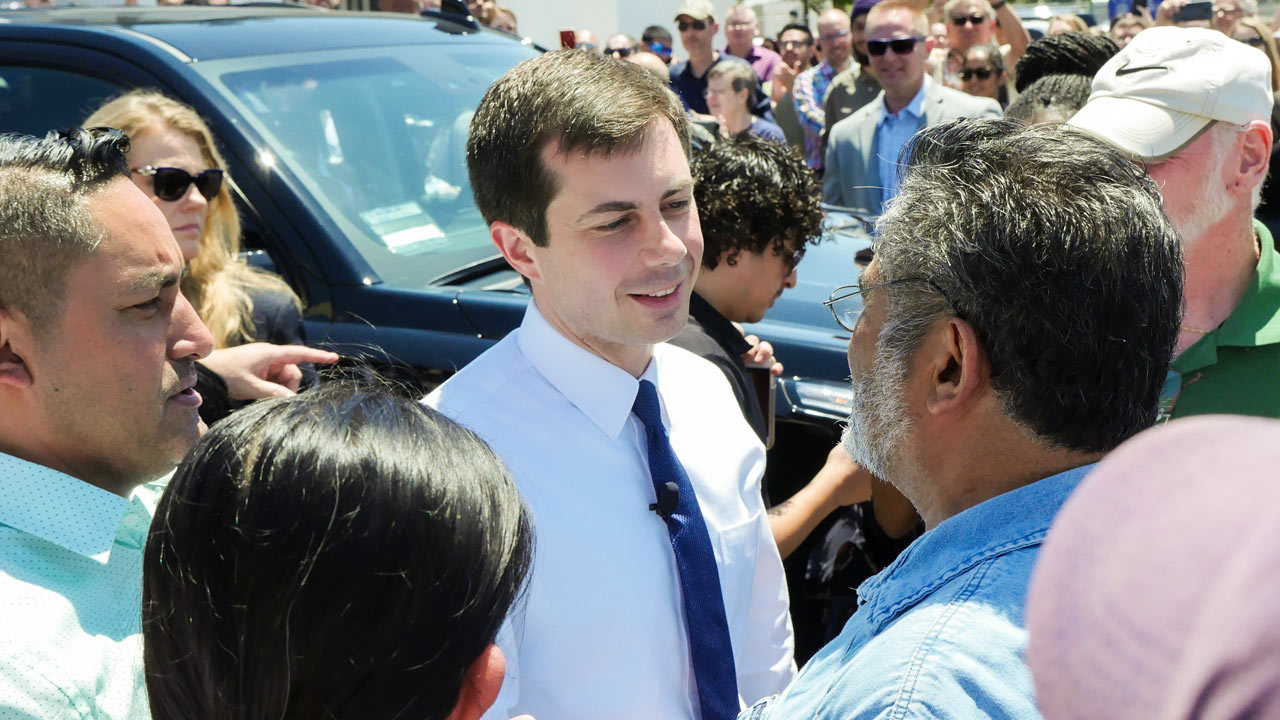 You can bet on just about anything online — including the Democratic presidential nominee.
Depending on the bookmaker, Pete Buttigieg, the openly gay mayor of South Bend, Indiana, has either the third- or fourth-best odds of facing President Donald Trump.

That’s a testament to the rising arc of Buttigieg’s campaign. A year ago, the 37-year-old Harvard graduate and former Naval Reserve intelligence officer was relatively unknown outside of the Midwest.

Buttigieg’s Youth Is Actually a Plus

Without a doubt, he’s a fresh-faced alternative to the old Democrats (Joe Biden, Bernie Sanders) and left-wingers (Elizabeth Warren, Sanders) aiming for the White House.
So what’s his appeal?
I put the question to Buttigieg fans who crammed into tiny Tuolumne Hall in downtown Fresno for a meet-and-greet with the candidate Wednesday morning.
The curated answer: He’s young, smart, well-spoken, likable and the anti-Trump.
“What we hear from him is so spot-on,” said Marianne Kast, a retired teacher.
Isn’t he a bit young? After all, the youngest president ever was Teddy Roosevelt, who was 42 when he moved up from vice president after William McKinley’s assassination. John F. Kennedy, the youngest elected U.S. president, was 42.
“Hell no,” Kast answered. “It’s Bernie’s age (77) that bothers me — or Biden’s age (76.)”

Buttigieg Is Calm in a Time of Political Turmoil

Sandy Baronian sees “Mayor Pete” as the antidote for a divided nation.
“Pete calms me,” she said. “He’s articulate and he’s intelligent.”
Buttigieg also scores points because he’s willing to politely engage people who disagree with him on the issues.
“His town hall on Fox News was great,” Baronian said.
It was great for Buttigieg as well. He turned the event in Claremont, New Hampshire co-moderated by veteran newsman Chris Wallace on the conservative network into a showcase for his campaign. It averaged 1.1 million viewers, according to Nielsen Media Research — topping the audience in the same hour for MSNBC and CNN combined.

A Wonk With Charisma

Buttigieg’s magic is that he’s a policy wonk who doesn’t sound like a wonk.
One, he knows how to break down policy and show how it might affect your life. Two, he’s blessed with indefinable traits that add up to charisma. Three, he presses opponents without sounding like he’s angry or on the attack.
On Monday, he took aim at Donald Trump and the president’s commandeering of the Republican Party.

In response to a question from the audience about anti-abortion laws passed recently in Southern states, Buttigieg offered his definition of pro-life:
“We have a responsibility to support mothers and to make sure that we have the right kind of birth control and sex education so that — if you don’t like Planned Parenthood, think about unplanned parenthood and the pressure that puts on our communities,” he said. “So the work that is done whether it’s by Planned Parenthood, or the work that ought to be done supported by government policies supported by the right kind of health care, full health care, health care where being a woman is not a preexisting condition, that’s what it means to be truly pro-life, in my opinion.”
On LGBTQ rights, Buttigieg cheered the progress while saying there’s a long way to go.
“In Indiana, while Mike Pence was governor, I got reelected with 80% of the vote the same year that I came out. So the progress has been unbelievable,” he said. “But until discrimination is not lawful in this country, until anybody can walk without fear, knowing that they can be who they are, we’ve got our work cut out for us, and I’ll be there every step of the way.”
Clearly, Buttigieg is trying to give voice to a Christian Left that has been all but buried in many parts of the country by the chest-beating Christian Right that elected Trump.

I asked longtime Fresno political analyst Don Larson if Buttigieg could end up as the Democratic nominee — ahead of Biden, Sanders or Kamala Harris.
As Larson sees it, Buttigieg is positioning himself for another presidential run down the line. His 2020 campaign is all about building his name and brand nationally.
“But I’m voting for him now,” said Larson, who turns 86 in September. “I don’t know that I can wait eight years.”