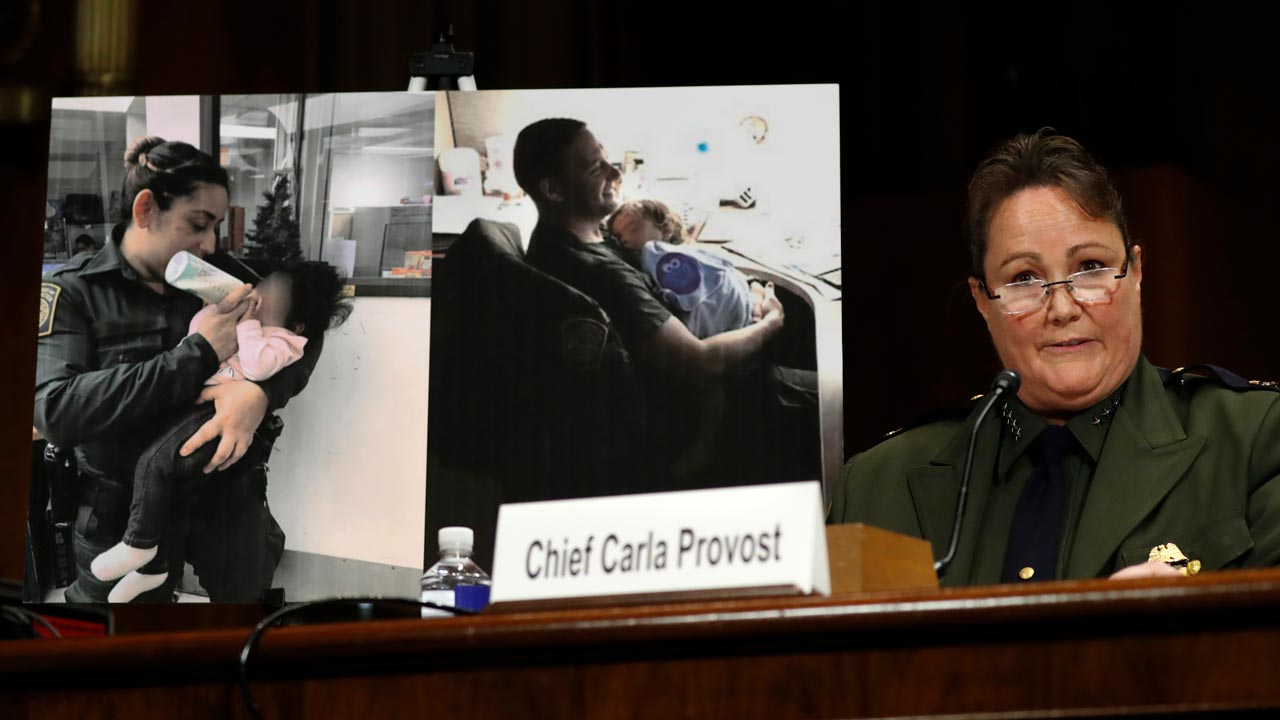 WASHINGTON — The number of migrants apprehended at the Southern border topped 100,000 for the second month in a row as the Trump administration manages an ever-increasing number of Central American families streaming to the U.S. that hardline policies have failed to stem.

Border Patrol Chief Carla Provost told senators Wednesday that apprehension numbers were “off the charts,” and she’s had to divert agents to care for children. As she spoke, images of Border Patrol agents holding small children flashed behind her. In one, an agent feeds a little girl a bottle.

“We cannot address this crisis by shifting more resources,” Provost said. “It’s like holding a bucket under a faucet. It doesn’t matter how many buckets we have if we can’t turn off the flow.”

There were 109,144 migrants encountered in April, the highest since 2007, including more than 58,000 migrant parents and children and 8,800 unaccompanied children taken into custody, according to Homeland Security figures. Border apprehensions are a barometer for people coming illegally, and a data point President Donald Trump watches closely and rails against.

Provost, a longtime border agent with more than 25 years of experience, said shifting resources will not address the crisis. She said she is worried about drugs and other contraband that is getting through as resources are moved to caring for children.

“I worry how much more is getting past us,” she said. “We have been forced to put our national security at risk.”

But lawmakers on both sides seem to agree more that there is a crisis at the border that needs to be resolved. Provost told senators at a Judiciary subcommittee hearing that border officials need laws changed to be able to detain families until their immigration cases are completed. She also said there needs to be changes to make it easier for children who have traveled alone to be returned to their countries. It’s a similar refrain repeated by Homeland Security officials, including Acting Homeland Security Secretary Kevin McAleenan. The White House has asked for $4.5 billion more to help manage the number of migrants.

Unauthorized border crossings have surged since the start of this year. In response, the U.S. government has made some asylum seekers pursue their cases while remaining in Mexico and dramatically limited how many people can request asylum at official crossings. An appeals court ruled late Tuesday that the administration could continue the program while litigation played out. Trump has also ordered agencies to consider charging fees to asylum seekers to pursue their cases once they enter.

Administration officials have debated proposals to reduce how many immigrants pass their initial “credible fear” screening as part of the asylum process. Immigration agencies are considering toughening the standards of the interview and having Border Patrol agents conduct interviews instead of asylum officers due to a belief that the agents would be less sympathetic.

Immigration agencies also allege that many adults and children who cross the U.S.-Mexico border are falsely posing as families so they can be released more quickly into the country. One practice they say is occurring is called “child recycling,” in which immigrant youth pose as the children of multiple adults to get them through processing.

Matthew Albence, acting director of U.S. Immigration and Customs Enforcement, said agents in recent weeks have identified 65 adults and children as fraudulent. Agents uncovered one case of a 7-year-old girl from Guatemala whose mother sent her three times to help other adults enter, Albence said.

Adults are also posing as teenagers to avoid being deported or sent to ICE detention, he alleged.

“We have individuals that are 23 that are posing as 16-year-olds,” he said.

ICE said last week that it would start a rapid DNA pilot program in which adults suspected of not being the parents of children accompanying them could voluntarily be tested for a familial relationship. Immigrant advocates say they worry expanded DNA testing could violate the privacy of migrant families and children and that some parents may not fully understand the process when they agree to it.

Payne on Campaign Funds: There’s Nothing I’m Trying to Hide