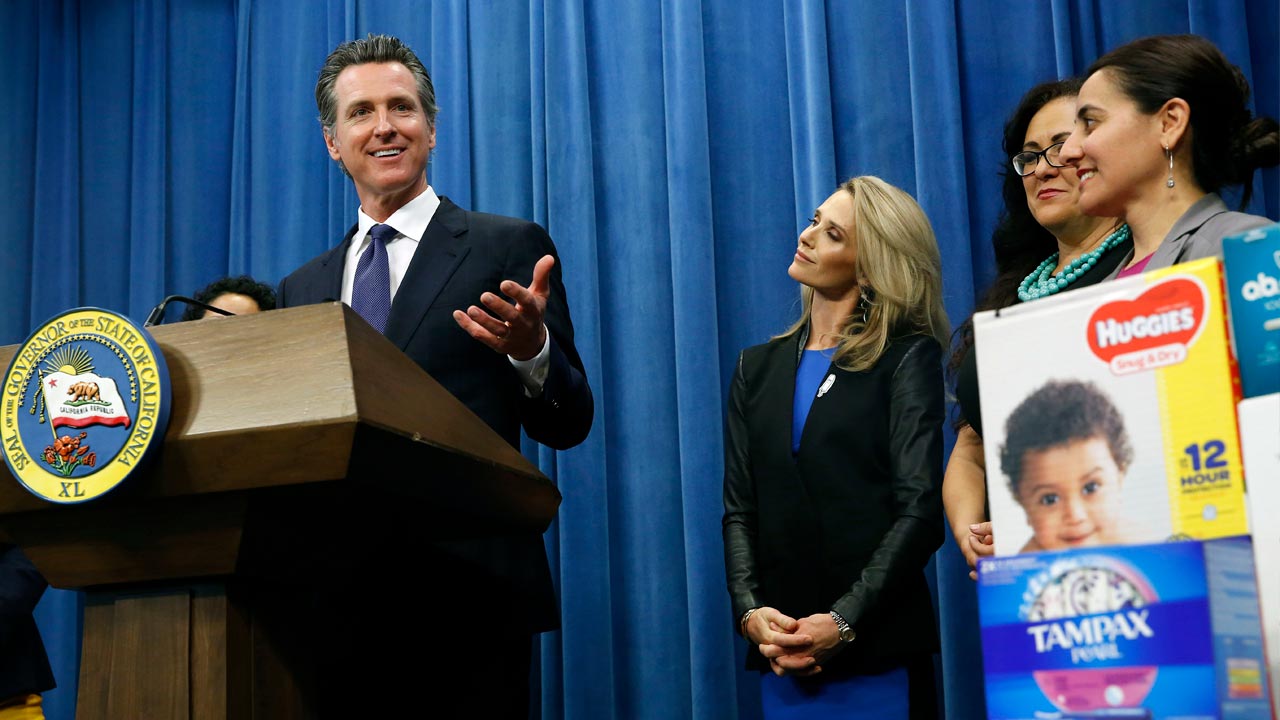 SACRAMENTO — Gov. Gavin Newsom and his wife, Jennifer Siebel Newsom, unveiled Tuesday what they call a “parents’ agenda,” including proposals to end the sales tax on tampons and diapers and to use revenue from legal marijuana sales to expand child care programs.

“The governor and I are proud parents of four young children and these issues do hit close to home,” Siebel Newsom said, while Newsom and a half-dozen female lawmakers stood behind her, flanked by boxes of tampons and diapers. “In California, we are fighting for a future where our daughters will be valued equally to our sons … where every parent will have the support they need to provide the best family for their

The proposals are part of the revised state budget Newsom will introduce Thursday, which outlines how he wants to spend more than $200 billion in tax dollars and other revenue. Cutting the diaper and tampon tax would eliminate up to $55 million, according to legislative estimates. He also wants to spend $134 million expanding child care programs, with $80 million coming from taxes on legalized marijuana, give families with children under 6 a tax credit of $1,000 and expand paid family leave from six to eight weeks.

He declined to say how much the paid family leave expansion would cost, saying it will be outlined later this week. He said the money will come from the reserves of the fund that pays for the existing program.

Newsom’s proposal to cut the tampon and diaper tax marked a departure from his predecessor, fellow Democrat Jerry Brown, who vetoed similar legislation in 2016. Democratic Assemblywoman Lorena Gonzalez, who has tried to pass the diaper tax exemption for five years, suggested having parents of young children in the governor’s office made the difference. Brown, 81, did not have children.

“I cannot tell you the frustration we’ve been through in trying to explain this to people who have never bought diapers,” Gonzalez said.

Democratic Assemblywoman Cristina Garcia said her proposal to eliminate the tax on menstrual products is about creating “menstrual equity,” meaning women won’t be taxed for products biology may require them to buy.

Newsom admitted it was uncomfortable for him to talk about women’s menstrual products, but said it’s important for men to understand the issue. He also declared himself a “proud feminist” and said more must be done to change the culture of caregiving at home, which he said too often falls to women.

On child care, Newsom would spend an additional $54 million on county-run child care programs through CalWORKs, the state’s public assistance program for families with children. The additional money from legalized marijuana sales would offer more spots in state child care programs, though he couldn’t say how many spots. Working families with children under 6 would get a new $1,000 tax credit, double what Newsom had proposed earlier this year.

Newsom’s proposal to expand paid family leave falls short of the six-months-per-child plan he hopes to eventually pass. California parents are now entitled to six weeks of paid leave at a fraction of their normal pay, which would extend to eight weeks per parent under Newsom’s plan. The expansion would cover care of sick family members as well as new babies.

Assemblywoman Marie Waldron, the chamber’s Republican leader, applauded Newsom for cutting taxes on “basic necessities” and increasing the child tax credit. But said she much more needs to be done to tackle California’s high cost of living.

“It’s time for real reforms that will actually bring down the cost of living in the Golden State,” she said in a statement.

When Brown vetoed the tampon and diaper tax bills, he called tax cuts akin to new spending, which he often warned against.

Newsom has said he plans to maintain Brown’s reserved approach to budgeting by limiting new ongoing spending in favor of using extra money to pay down debts and bank away for the next recession. The revised plan he’ll announce Thursday will kick off final weeks of negotiations with lawmakers, who have until June 15 to pass a budget. Newsom has until June 30 to sign it.

In January, he proposed a $209 billion budget with a $21.5 billion surplus. He proposed several billion dollars’ worth of new spending on child care, education and housing, called for a new tax to pay for improvements to drinking water, but also dedicated $13 billion to paying down debt and adding to reserves.