Janz Takes Swings at Brand in 2020 Mayoral Opening Round 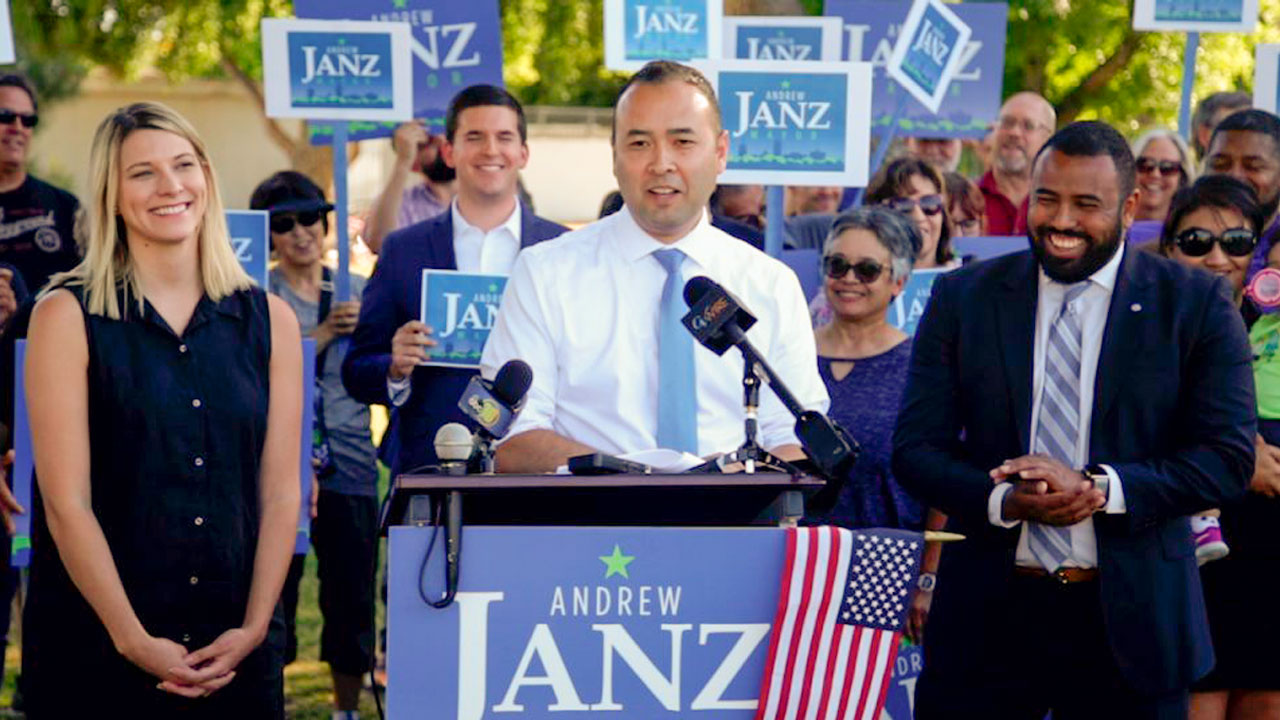 The gloves are off in the 2020 Fresno mayoral race, and it’s only the opening bell.

Surrounded by 60 or so supporters, Andrew Janz officially announced his entry into the race for the city’s top leadership job. He called himself a fresh breath of air, hoping to defeat the current occupant of the mayor’s office, Lee Brand.

Brand filed to run for re-election last year and has already raised more than $445,000.

Janz chose central Fresno’s Radio Park, a place with a less than stellar reputation for cleanliness and safety.

“This park perfectly symbolizes the failures of the Lee Brand administration,” Janz said. It was one of many times Janz took a swing and the man he hopes to knock out of City Hall next March.

Janz said his background as a prosecutor in the Fresno County District Attorney’s office gives him the unique perspective to lead Fresno.

“Unlike Lee Brand, I don’t think you need to be a career politician to run for mayor,” Janz said.

Janz ran in 2018 for congress against Devin Nunes (R-Tulare). Even though he lost, his six-point margin was the closest race the incumbent every faced. In the process, he attracted national attention and raised over $9 million.

Related Story: Who's #1? Nunes-Janz Most Expensive House Race in Nation.

Janz took a swipe at one of Brand’s top selling points — job creation.

He also criticized Brand’s views on the homelessness problem, funding police and parks, and the incentives package he orchestrated to lure the Amazon and Ulta distribution centers to Fresno. “We can’t be giving them a $30 million tax break … especially if these corporations don’t promise to hire local employees … construction workers,” Janz said.

He also said, “the current administration is failing miserably in promoting and selling Fresno to the rest of the country,” meaning attracting attention from Silicon Valley, Sacramento and Washington.

Janz says he has not raised money for his campaign yet. He vows not to take campaign contributions from corporations or developers. “We know developers have undue influence in the past when it comes to City Hall,” Janz said.

When asked if he would take money from unions, he said he hasn’t yet, but “I don’t think the people of Fresno will care if I take money from teachers and plumbers. I don’t.”

Dillon Savory, executive director of the Central Labor Council, said he showed up to Janz’s announcement to observe. His group will conduct interviews for mayor candidates in the next few weeks.

The most prominent political figure attending the event was District 7 councilman Nelson Esparza, who introduced Janz.

“It’s time for that space ship we call City Hall to have a new captain,” Esparza said.

Tyler Maxwell, running for city council in east central Fresno in 2020, also stood behind Janz. Maxwell serves as an aide to Esparza.

Dr. Natalie Ramirez, a Fresno optometrist, came out to support her friend. She liked his values.

“Andrew wants to help the city of Fresno,” she said. “His vision is to make it better.”

Peter Mayhew, Chewbacca in the ‘Star Wars’ films, dies at 74