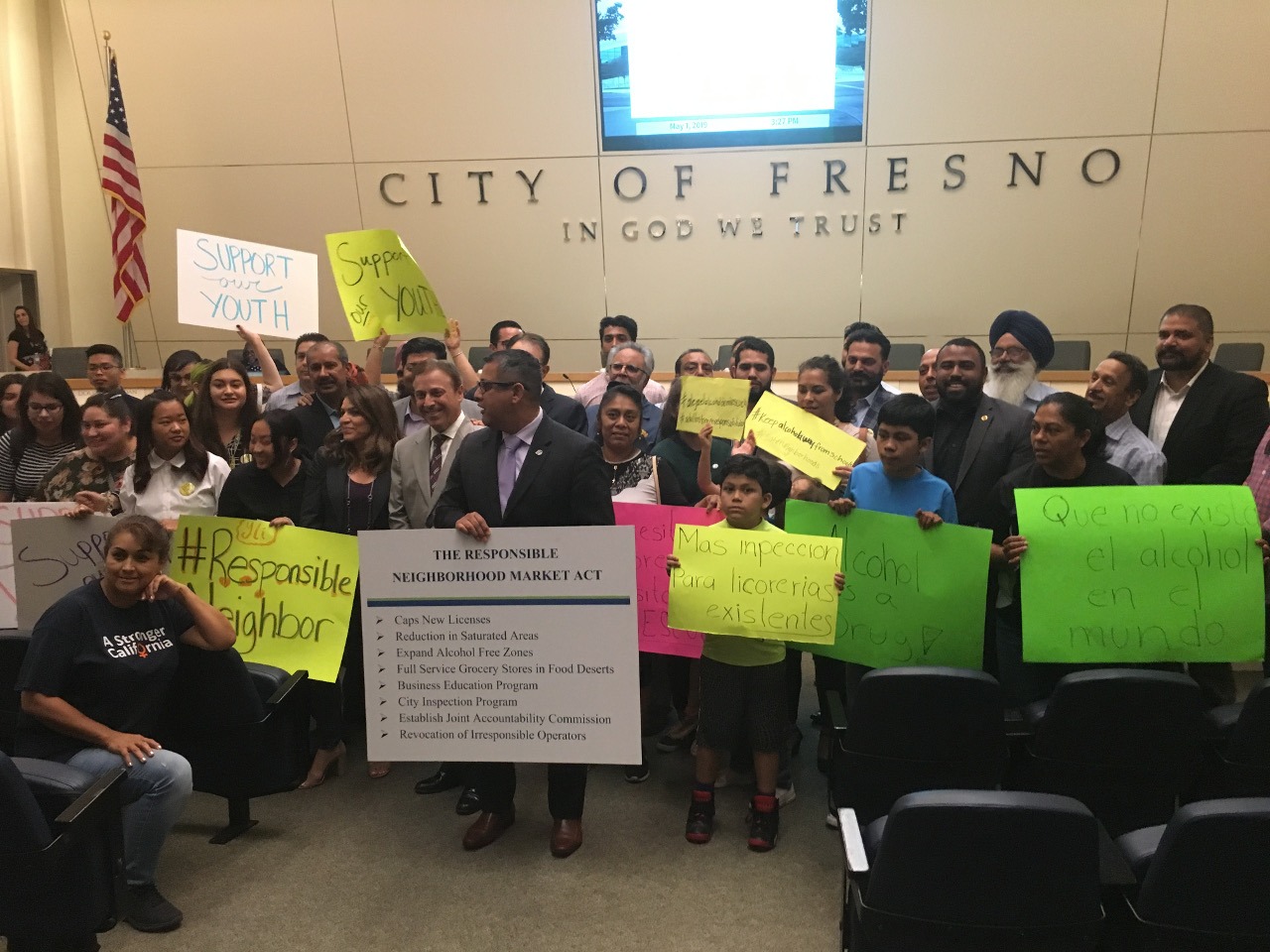 The Fresno City Council unanimously passed a resolution Wednesday to fix what supporters say is the oversaturation of off-sale alcohol dealers, especially in the central and south parts of the city.

Other proposals include limiting ads to 5% on store windows, increasing the distance between stores and schools from 600 feet to 1,000 feet, and participating in a city inspection program.

Members of various youth groups fighting the spread of alcohol spoke in favor of the Responsible Neighborhood Market Act. A local trade group representing convenience store owners supported it, too.

The council met in a special meeting at the request of Councilman Garry Bredefeld. He said he was unable to attend Thursday’s regularly scheduled meeting.

The biggest argument on the dais didn’t involve free-market ideals, but rather compelling businesses to abide by regulations.

“We are not doing our job here with code enforcement,” Bredefeld said. He wondered aloud about the effectiveness of new regulations if current ones aren’t being enforced.

“There was no priority for it. It’s a priority now,” Chavez said.

While council members agreed that bumping up the city’s code enforcement team is needed, council president Paul Caprioglio said it was a discussion better suited for budget time.

The local chapter of the American Petroleum and Convenience Store Association represents 300 businesses in the area. Some of its members attended the meeting in support.

“Oversaturation is not going to help the community and the neighborhood.” — Valley APCA president Andy Chhikara

“Oversaturation is not going to help the community and the neighborhood,” APCA president Andy Chhikara said.

He also wanted stores to follow their conditional use permits. He pointed to the proliferation of advertising on storefronts as an example of non-compliance.

“Not following conditional use permit laws caused illegal and so many excessive signs, which was not necessary. Since no one was following it, the signs kept on piling up,” Chhikara said.

Some owners said that while they supported stronger regulation, they were good businessmen tainted by the bad actors. They also expressed concern about a possible cost to implement an inspection program.

Arias said that this proposal does not include such fees.

“If Coors puts two signs on your window, Budweiser figures their market share is double, so they need four signs to reach equality of the market share,” Chhikara said.

Store owners are at the mercy of distributors, Chhikara said, because of retaliation.

“There were distributors who were (saying) … ‘If you don’t give us the equality, we won’t deliver you the product or we will not give you a (discount) on the price.’ ”

Youth dominated the hearing with members of groups like Youth Leadership Institute and Friday Night Live speaking about the hardships of students encountering liquor stores.

Antonio Jauregui of the Fresno Youth Commission spoke in favor of the ordinance.

“This is a matter of oversaturation in these districts where it is becoming an issue in the sense of young people having access to alcohol, young people being exposed to liquor stores, and all that stuff,” Jauregui said.

The first test of the council’s resolve on liquor store licenses was scheduled for Thursday. But the prospective owner of a 7-Eleven at Cedar Avenue and Tulare Street — across the street from Roosevelt High School — withdrew its appeal to the council Wednesday.

The Fresno Planning Commission in February approved permits for the store and a gas station, but not the right to sell alcohol. In its letter, owner SKW Tulare, LLC, did not say why it yanked the appeal.

“My constituents have made their opposition very clear and I’m here to represent them,” Esparza said in a news release. “I’ve been crystal clear with the special interests who have come to me requesting alcohol licenses and wanting to engage in the type of development that would be detrimental to District 7 neighborhoods: the answer is no.”

“For now the saga is over and residents can rest easy.”

Related Story: The Days of Rubber-Stamping Liquor Licenses Are Over