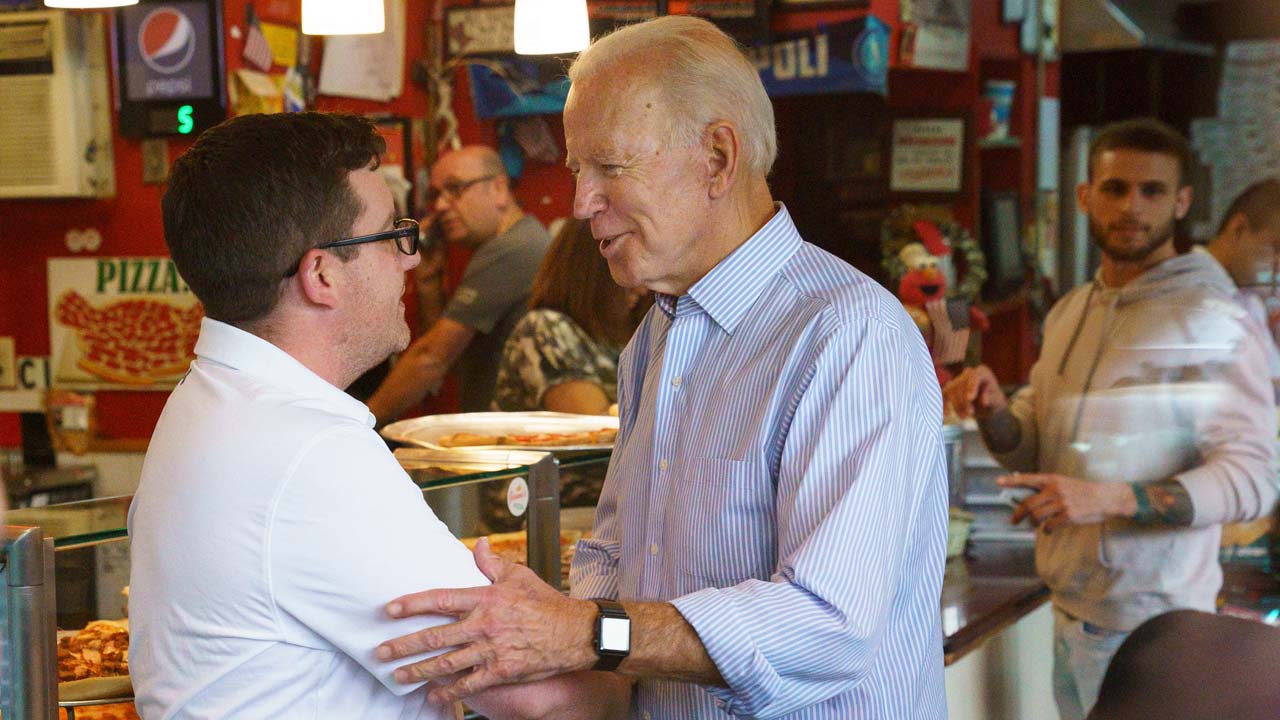 At the start of his 2020 presidential campaign, Joe Biden is finding that his front-runner status comes with a glaring spotlight on his biggest political weaknesses.
The former vice president seemed to struggle at points on Friday under questioning about women who have said his unwanted touching made them uncomfortable. He appeared defensive when asked about his role in how Anita Hill was treated in 1991 when she accused then-Supreme Court nominee Clarence Thomas of sexual harassment.
“I’m sorry this happened. But I’m not sorry in the sense that I did anything that was intentionally designed to do anything wrong or be inappropriate,” Biden said on ABC’s “The View,” referring to the women who’ve mentioned his unwanted touching.
Pressed on how he handled Hill and her accusations at Thomas’ confirmation hearings, Biden said, “I don’t think I treated her badly.” He then repeated his contention that his error as Senate Judiciary chairman was in not ensuring others treated Hill respectfully.

Biden’s team remains upbeat about the 2020 launch, particularly after he reported raising $6.3 million in the first 24 hours of the campaign, a total that cements his status as a front-runner. Yet the takeaway remains: The long public career that Biden sees as his biggest selling point includes many missteps that some voters haven’t forgotten.
“There’s either an empathy gap or an unwillingness to take it seriously,” Women’s March spokeswoman Sophie Ellman-Golan said after Biden’s answers on “The View.”
She predicted that his interview will not put the issues behind him. “It matters a lot,” she said. “We’ve hit a point right now where women are not going to put up with as much as we’ve been forced to put up with in the past.”
The television appearance came as Biden’s campaign announcement video has caused some early headaches for the campaign.

Biden framed President Donald Trump as a threat to the nation’s character, building his attack around the August 2017 protests in Charlottesville, Virginia, and he alluded to the death of a counterprotester who was killed by a white supremacist. Rumors circulated that the family of Heather Heyer, the counterprotester, was angry that Biden mentioned her. But Heyer’s mother told The Associated Press that wasn’t the case.
Susan Bro said Biden did not contact her before the campaign video went live but called her hours later.
“I said, ‘I noticed you didn’t mention her by name. Was that because you had not contacted me?’ and he said, ‘That is correct,'” Bro said.
“I think he thought it was going to be traumatizing for me. Everybody acts like I didn’t remember that my daughter was killed,” she said, adding that she was not upset Biden did not contact her before the video went live.
“I’ve been hearing from people, ‘We heard you were really angry and upset,’ and I said, ‘No, I wasn’t. No, it’s just politics,'” Bro said. “Heather is not the issue. The issue is hate. … I’m glad someone is addressing the issue.”
Days earlier, Biden’s team had to navigate rumors that he was going to launch his campaign in Charlottesville against the objections of local officials. Charlottesville City Councilor Wes Bellamy said that he talked with senior Biden advisers ahead of the launch but that there were never plans to hold an actual event there. Bellamy said a Biden aide apologized to him about the rumors.

Prompted to Apologize to Women

Joy Behar, a co-host of “The View,” alluded to the dynamics Friday, joking that it was an “apology” episode.
Biden’s first apology attempt came when asked explicitly whether he was “sorry for what you did” in instances where women have said his shows of physical affection made them uncomfortable.
He answered as he has previously, saying he has “to be more aware” of “private space.” After being pressed, Biden finally repeated verbatim a model apology demonstrated by one of his friendly interviewers: “I’m sorry for invading your space.” He later added, “It was inappropriate, but I didn’t understand. I assumed.”
Biden never made it to a direct apology for anything he did during the Hill-Thomas hearings.
Behar noted that his statements over the years, including in recent weeks, have been in the passive voice. “I think what she wants you to say is ‘I’m sorry for the way I treated you,’ not ‘for the way you were treated,'” Behar prompted. Biden responded, “I’m sorry for the way she got treated.” He added, “I did everything in my power to do what I thought was within the rules to be able to stop things.”
When pressed on why he did not personally contact Hill until this month, Biden noted his public statements and said he didn’t want to “invade her space.”