While rosters in the California League are in flux, the broadcast booths in the eight-team league are relatively stable.

Before Jill Gearin stepped to the mic this year for the Visalia Rawhide, the other seven teams in the High-A league had the same set of announcers since 2014.

“The criticism is definitely going to come. You just kind to have to laugh it off.” — Jill Gearin

It’s not the fact that Gearin, at age 22, is the youngest broadcaster in the league that makes her unique. It’s the more obvious reason.

While this is Gearin’s first professional job, she served as an intern with the Boston Red Sox radio network last year. She also has had mic time with the Nashua (New Hampshire) Silver Knights collegiate summer ball team, and her alma mater Emerson College in Boston.

Gearin knows that no matter how well she calls games in the booth, she’ll be judged by her gender. No big deal she says.

“The criticism is definitely going to come. You just kind of have to laugh it off. I mean, when I first announced, someone commented ‘women make lousy broadcasters.’ The thing I thought to myself was, so do some men. It’s not a gender thing. People are going to have their opinions. You just have to pay attention to the positive comments instead of the negative ones.” 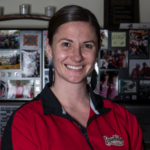 “So, between all of these fate-filled connections with Jill, and in my discussions with her, I could tell she was meant to be in Visalia.” — Visalia GM Jennifer Reynolds

It’s all about connections. Gearin attended Emerson with Julian Rifkind, the Rawhide’s director of baseball operations. He put her in touch with the team’s general manager, Jennifer Reynolds.

“Women tend to really support each other in baseball and all sports, really,” Gearin said.

Reynolds had considered dropping broadcasting after her announcer for the last two years, Vinnie Longo, moved out of town. She thought about replacing broadcasts with the team’s online play-by-play software.

“I told myself that unless I got a resumé that stood out to me, I was going to go the technology route,” Reynolds said.

Then, she reviewed Gearin’s resumé and received an email praising the prospective play-by-play announcer from a Rawhide season ticket holder, who happened to be a Gearin family friend.

“So, between all of these fate-filled connections with Jill, and in my discussions with her, I could tell she was meant to be in Visalia.”

Praise from Baseball Pioneer and Mentor 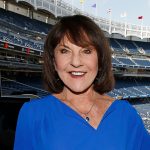 “Jill has already taken the most difficult step. … I have no doubt she will be absolutely great at this!” — Yankees broadcaster Suzyn Waldman

Waldman is the first female to hold a full-time MLB broadcasting job, working her 13th season on Yankees radio.

“She took multiple times to speak with me and really help me figure out how to feel comfortable in what’s considered a man’s world, still,” Gearin said.

Waldman, in turn, praised her protégé:

“Jill has already taken the most difficult step. It’s hard to leave your comfort zone and take a chance on yourself on the other side of the country. She knows the game, has learned from some of the best in the business in Boston, and I have no doubt she will be absolutely great at this!”

Father’s Influence on Her Career Choice

Despite growing up in Hermosa Beach, Gearin cheered for the Boston Red Sox — influenced by her father, a Massachusetts native. Her dad also instilled in her a love of baseball.

“I’m an only child, and my dad really wanted a boy. Instead, he had me and taught me baseball from a young age,” Gearin said.

Her mom joked that she talked a lot and she should go into broadcasting.

Her goal since the eighth grade is to broadcast for the Red Sox. Last season, she interned with their radio broadcast team. Her roles included gathering interviews with players for broadcast, and helping the announcers with stats.

However, because she was employed by the radio station and not the team, she did not receive a World Series ring. 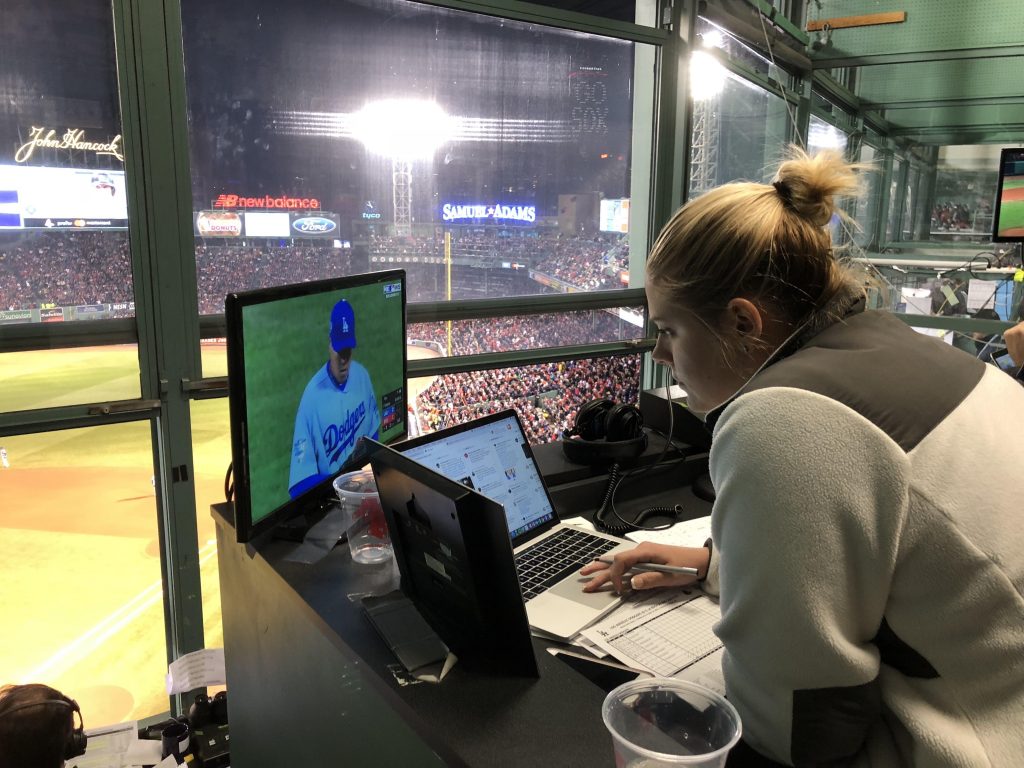 Glass Ceiling at All Levels

Gearin can’t believe the lack of females in baseball broadcasting. She is only one of three in the minor leagues.

Reynolds, her boss, has an idea.

“It’s familiar territory for me.  I was at one time the youngest and only female general manager in the California League. I think it goes without saying, but I am a progressive person in general.  I’m not afraid to do things differently, to take on challenges, and mentor other females wanting to be in the industry.”

Waldman’s advice to Gearin is to keep a positive mindset.

“You will be tested, you will be criticized, but, don’t let it stop you. Most of all, don’t let anyone who doesn’t know you and doesn’t care about you dictate how you feel about yourself,” Waldman said.

How does Gearin plan to achieve her goal of returning to the Red Sox booth?

“Just having the connections. It’s really all just about luck, which is so unfortunate. I do think I have a little bit of an advantage, actually, by being a woman, because it’s starting to become a bigger trend in baseball.”