Newsom Meets Salvadorans Who Tried to Reach US 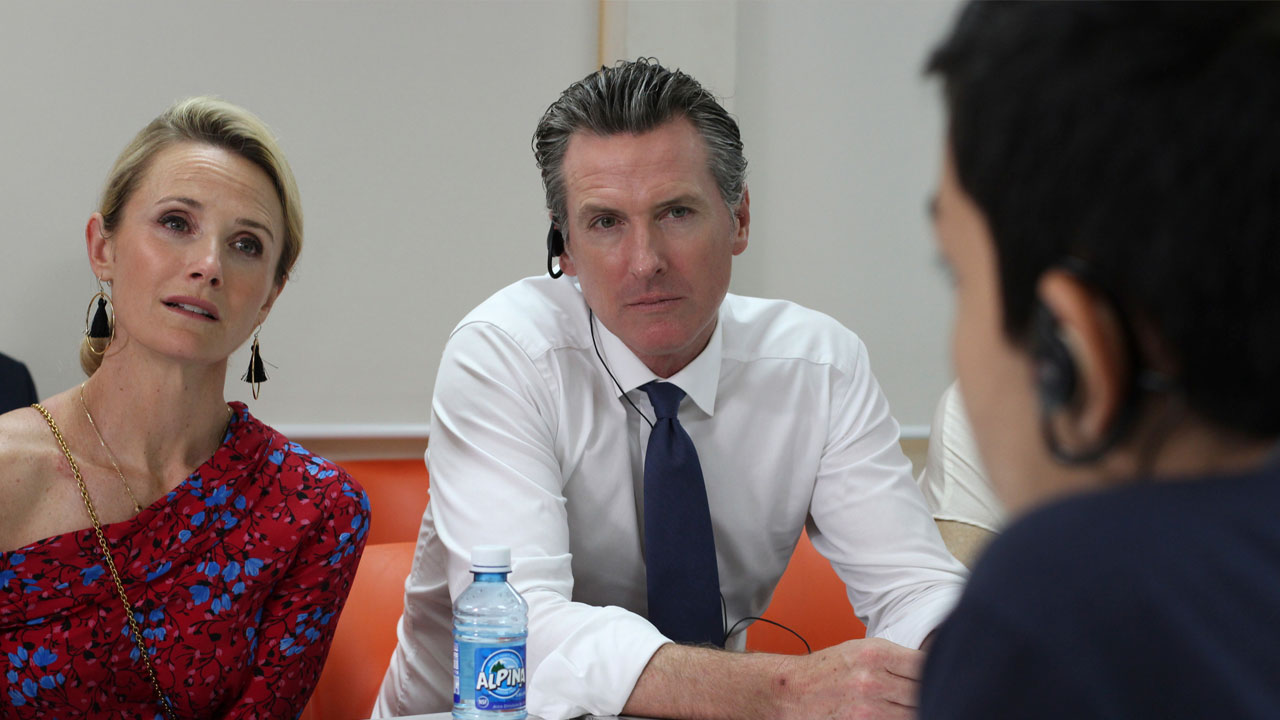 PANCHIMALCO, El Salvador — David Escobar Fuentes fled El Salvador because gangs were extorting his ranching family, while Bryon Melgar Menjivar wanted to escape the pressure to join a gang that started when he was 15. Sandra Monroy headed north for a good job.
They told Gov. Gavin Newsom their stories Monday, the second day of his visit to El Salvador. He met them at the country’s only processing center for migrants who are deported from Mexico or the United States.
It was his first opportunity to interact directly with people who have left the small Central American country because of poverty and violence. Later, he traveled to the small mountain town of Panchimalco, the home of indigenous Salvadorans, for a cultural demonstration and conversation on human rights abuses.

15,000 Salvadorans Have Entered US Since October

California has more Salvadorans than any other state, and Newsom is in the country to learn more about why thousands are fleeing for the U.S. About 3,000 unaccompanied Salvadoran children and 12,000 family members have entered the United States since October, according to U.S. Customs and Border Protection data.
Fuentes and Monroy, his aunt, left for the U.S. in a caravan last October. Both said they hoped to achieve more opportunity, safety and a version of the “American dream.”
“We were so excited because we were going to go to the United States — the wish all Salvadorans have,” Monroy said.
But they never made it. Authorities in Mexico stopped them, held them for three days and then bused them back to El Salvador. They did not share details about why they were stopped.
Menjivar successfully made it to an aunt’s home in Houston several years ago but returned home voluntarily when his mother needed help. He had crossed the border illegally with help from a human smuggler.

Fuentes, Menjivar and Monroy met with Newsom privately after sharing their stories with reporters. The International Organization for Migration chose them to meet with the governor.
Fuentes, 26, and Menjivar, 18, spoke to reporters about how gang violence permeates life in El Salvador, prompting many young men to leave. Violence by gangs has made El Salvador one of the most dangerous countries in the world, with 50 homicides for every 100,000 people. By contrast, the U.S. rate is about five per 100,000.
Fuentes said his family used to own a farm with cattle and goats but was forced to sell many of them off as gangs demanded much of their profits. First his cousin left, then Fuentes decided to join a caravan with Monroy. He had hoped to connect with a friend in Oklahoma after crossing the border.
“Here, the struggle is day by day, you have to survive one day for the other,” he said of El Salvador, saying different gangs hold a grip on each part of the country.
President Donald Trump, who is shaking up his immigration leadership over frustration with a growing number of migrants at the southern border, has accused gang members of posing as migrants to enter the U.S. and bring violence.

Monroy said some people in the caravans may be affiliated with gangs but most are trying to escape violence.
Most Salvadorans at the reintegration center are sent back from Mexico, arriving on buses, said Salvador Gutierrez, deputy chief of mission for the International Organization for Migration. The U.S. also deports about three planes of up to 130 migrants per week, he said.
Newsom and his wife, Jennifer Siebel Newsom, later watched performances at a cultural center that aims to teach children traditional crafting, song and dance to help them build job skills in Panchimalca, a rural community surrounded by largely gang-controlled areas.
Katherine Vasquez, a 17-year-old who performed in one of the dance groups, said that while violence surrounds Panchimalca, she is not scared every day. She likes living there because of its rich traditions rooted in the indigenous culture.
She did not know Newsom before his arrival but said she appreciated the visit.
“I think he can help us to create new programs,” Vasquez said. “It’s good he’s visiting our village because he has an idea about the things that we can do.”
Earlier in the day, Newsom met privately with President Salvador Sánchez Cerén and U.S. Ambassador Jean Manes.

FUSD's Surplus Food Used to Go to the Dump. Not Anymore.