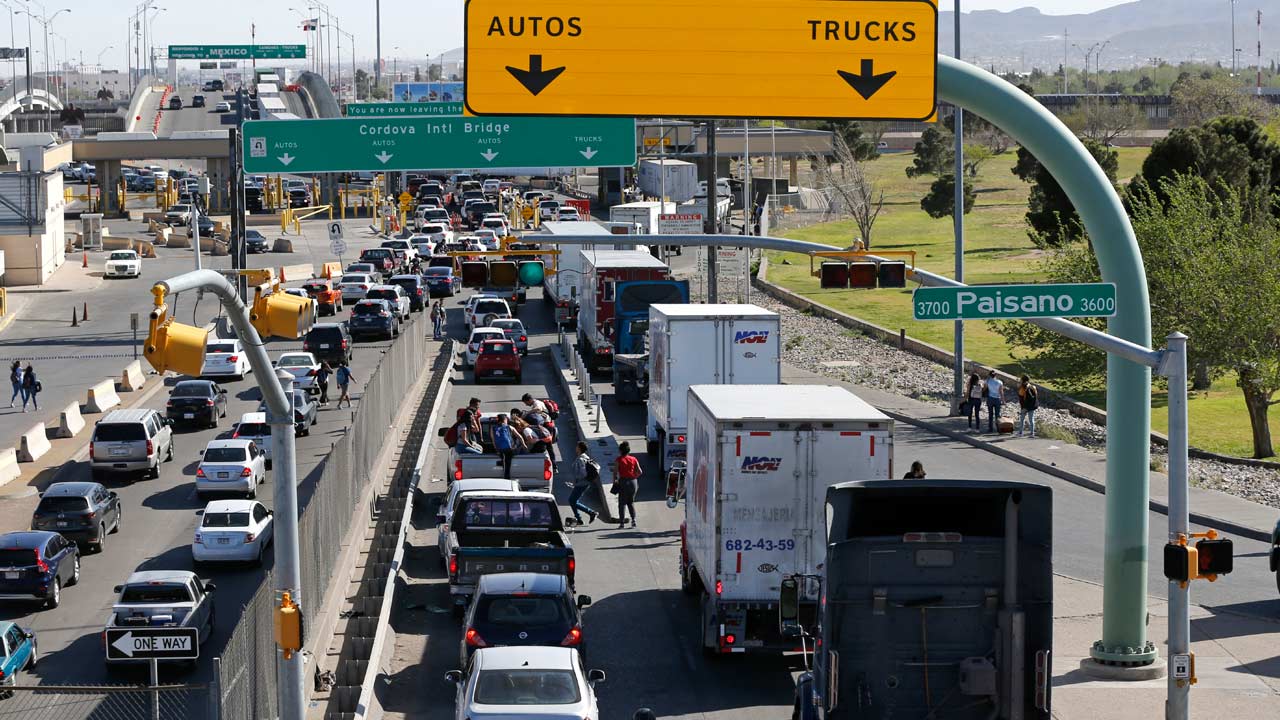 President Donald Trump’s threat to shut down the southern border raised fears Monday of dire economic consequences in the U.S. and upheaval of daily life in a stretch of the country that relies on the international flow of not just goods and services but also students, families, and workers.
Politicians, business leaders, and economists warned that such a move would block incoming shipments of fruits and vegetables, TVs, medical devices, and other products and cut off people who commute to their jobs or school or come across to go shopping.
“Let’s hope the threat is nothing but a bad April Fools’ joke,” said economist Dan Griswold at the Mercatus Center at George Mason University in Virginia. He said Trump’s threat would be the “height of folly,” noting that an average of 15,000 trucks and $1.6 billion in goods cross the border every day.

Dairymen Say Border Closure Would Be ‘Punch in the Gut’

The nation’s dairymen vociferously criticized the president’s threat.
“Closing the U.S. southern border to Mexico would be a gut punch that could set the industry back by a decade or two,” said Tom Vilsack, president/CEO of the U.S. Dairy Export Council. “Dairy exporters already are suffering from diminished access to export markets due to high tariffs and lack of progress on U.S. trade agreements.”
In 2018, a record 15.8 percent of U.S. milk production was exported. Mexico was the largest single customer for U.S. dairy exports, with sales of $1.4 billion. The impact would be even bigger on California dairies. Half of the state’s dairy exports go to Mexico.

In a statement released by his office, Rep. TJ Cox (D-Fresno) blistered the president for talking about closing the U.S. border with Mexico.
“Enough is enough. These misguided threats by the President and his Administration are making our farmers and ranchers poorer, and the Central Valley less prosperous,” Cox said. “We cannot and should not negotiate with our countries by using the livelihoods of our farmers and ranchers as bargaining chips.”

Trump brought up the possibility of closing ports of entry along the southern border Friday and revisited it in tweets over the weekend because of a surge of Central Americans migrants who are seeking asylum. Trump administration officials have said the influx is straining the immigration system to the breaking point.

“If Mexico doesn’t immediately stop ALL illegal immigration coming into the United States through our Southern Border, I will be CLOSING … ….the Border, or large sections of the Border, next week,” Trump tweeted. Mexico is one of the United States’ most important trading partners, ranking second among U.S. export markets.

Opposition from San Diego to Texas

Elected leaders from border communities stretching from San Diego to cities across Texas warned that havoc would ensue on both sides of the international boundary if the ports were closed. They were joined by the U.S. Chamber of Commerce, which said such a step would inflict “severe economic harm.”
In California’s Imperial Valley, across from Mexicali, Mexico, farmers rely on workers who come across every day from Mexico to harvest fields of lettuce, carrots, onions, and other winter vegetables. Shopping mall parking lots in the region are filled with cars with Mexican plates.
More than 60 percent of all Mexican winter produce consumed in the U.S. crosses into the country at Nogales, Arizona. The winter produce season is especially heavy right now, with the import of Mexican-grown watermelons, grapes, and squash, said Lance Jungmeyer, president of the Fresh Produce Association of the Americas.
He said 11,000 to 12,000 commercial trucks cross the border at Nogales daily, laden with about 50 million pounds of produce such as eggplants, tomatoes, bell peppers, lettuce, cucumbers, and berries.

Laredo Mayor Pete Saenz, chairman of the Texas Border Coalition, said a closure would be catastrophic.
“Closing the border would cause an immediate depression in border state communities and, depending on the duration, a recession in the rest of the country,” he said.”Our business would end,” said Marta Salas, an employee at an El Paso shop near the border that sells plastic flowers that are used on the Mexican side by families holding quinceañeras, the traditional coming-of-age celebrations.