JERUSALEM — The Israeli army on Tuesday bombed several targets in the Gaza Strip and bolstered its forces along the volatile frontier as a truce with the territory’s Hamas rulers showed signs of unraveling.

“I can tell you, we are prepared to do a lot more. We will do what is necessary to defend our people and to defend our state.” — Prime Minister Benjamin Netanyahu

Palestinian militants responded with a new barrage of late-night rocket fire, setting the stage for a fresh round of fighting less than two weeks before Israel holds national elections. The violence is likely to become a major theme in the final stretch of a tight re-election campaign for Prime Minister Benjamin Netanyahu.

Netanyahu cut short a visit to the U.S. and rushed back to Israel on Tuesday to deal with the crisis. After meeting with Netanyahu, Israel’s military chief, Lt. Gen. Aviv Kohavi, ordered an additional troop buildup along the border.

Netanyahu had been scheduled to give a speech in Washington to the AIPAC pro-Israel lobbying group. Instead, he addressed the group by satellite, telling them that over the past 24 hours Israel had pounded militant sites in Gaza on a scale not seen since a 2014 war with Hamas.

“I can tell you, we are prepared to do a lot more,” he said. “We will do what is necessary to defend our people and to defend our state.”

Tuesday night’s airstrikes came in response to a lone rocket attack. The military said it hit a Hamas military compound and a weapons manufacturing warehouse in southern Gaza. Militants responded by firing another rocket. Israel said both projectiles landed harmlessly in open areas. 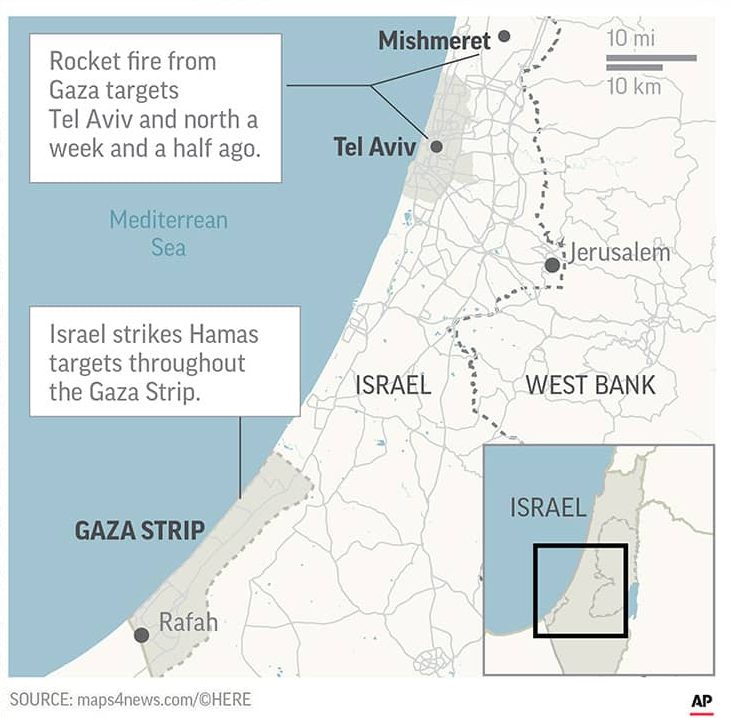 Israel and Hamas Are Bitter Enemies

The sudden burst of late-night fighting ended a daylong lull that had raised hopes of a cease-fire taking hold.

The fighting subsided by Tuesday morning. Senior Hamas official Ismail Radwan told reporters Tuesday that the militant group accepted a cease-fire plan with Israel, saying “we are committed to it” as long as Israel is. There was no immediate comment from Israel.

Israel and Hamas are bitter enemies that have fought three wars and dozens of skirmishes since the Islamic militant group seized control of Gaza in 2007.

The latest round of violence was triggered by a rocket fired early Monday from Gaza that slammed into a house in central Israel and wounded seven people.

Gaza militants responded by firing dozens of rockets into southern Israel, forcing residents to spend the night in shelters and canceling school across the region.

The fighting subsided by Tuesday morning. Senior Hamas official Ismail Radwan told reporters Tuesday that the militant group accepted a cease-fire plan with Israel, saying “we are committed to it” as long as Israel is. There was no immediate comment from Israel.

Both Netanyahu and Hamas are in difficult situations, and neither side would seem to have an interest in a major conflagration.

Netanyahu is locked in a tight race for re-election, and heavy fighting near the April 9 election could turn voters against him. Netanyahu has sought to campaign as the country’s most experienced statesman and security expert.

Netanyahu faced the difficult task of delivering a tough blow to Hamas while avoiding protracted fighting that could work against him on election day. He has come under heavy criticism from both allies and opponents for what they say has been a failure to contain Gaza militants.

In Gaza, Hamas is facing perhaps the toughest domestic test of its 12-year reign.

An Israeli-Egyptian blockade, combined with sanctions by the Palestinian Authority and mismanagement by the Hamas government, have fueled an economic crisis that has left Gaza with an unemployment rate above 50 percent.

Hamas has been leading weekly protests along the Israeli perimeter fence for the past year in hopes of easing the blockade, but the demonstrations, in which some 190 people have been killed by Israeli fire, have had little effect.

Last week, hundreds of Gazans trained their ire on Hamas instead as they protested the dire conditions. Hamas responded with a violent crackdown, beating and arresting dozens of demonstrators and drawing rare public criticism. 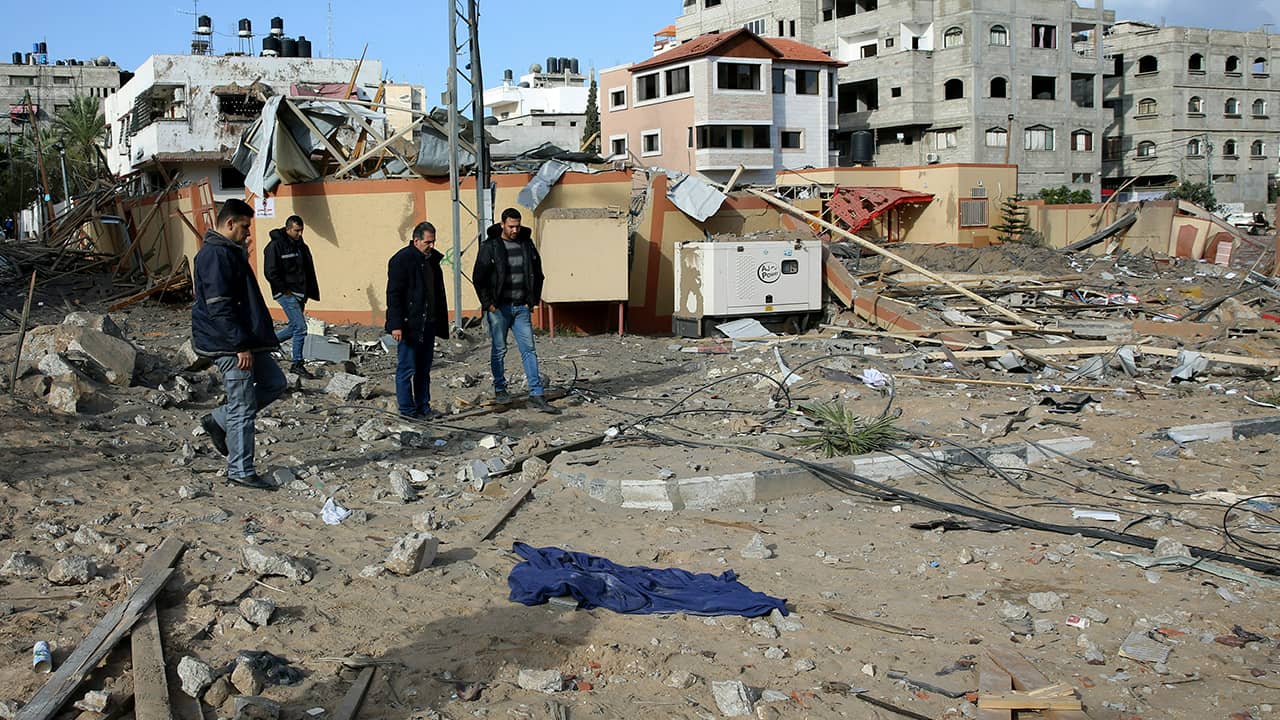 Palestinians inspect the damage of the offices of Hamas leader Ismail Haniyeh, in Gaza City, Tuesday, March 26, 2019. A tense quiet took hold Tuesday morning after a night of heavy fire as Israeli aircraft bombed targets across the Gaza Strip and Gaza militants fired rockets into Israel in what threatened to devolve into a major conflict two weeks before the Israeli election. (AP Photo/Adel Hana)

Rockets Were Fired From Gaza Toward Tel Aviv

The sides have conducted indirect cease-fire talks through Egyptian mediators in recent months, and Israel even allowed the delivery of millions of dollars of Qatari aid to Hamas to ease harsh conditions in the territory.

“The Israeli government can’t, under no circumstances, settle. Firing at Israeli communities that border with Gaza is the same as firing toward Tel Aviv, and it’s impossible we will show restraint at the continuous firing.” — Haim Jellin, a Labor party candidate for parliament

Netanyahu has indicated the election would not deter him from acting.

“Hamas needs to know that we will not hesitate to go in and take all necessary steps, regardless of anything, any date, other than Israel’s security needs,” he said after meeting Trump.

Two weeks ago, rockets were fired from Gaza toward Israel’s densely populated commercial capital of Tel Aviv, and the Israeli military struck back hard, seemingly headed toward all-out-conflict. But Gaza’s Hamas leaders said the rocket fire was accidental and the fighting quickly subsided.

For Israelis living along the border who have suffered from years of rocket attacks, that is little comfort.

“The Israeli government can’t, under no circumstances, settle,” said Haim Jellin, a Labor party candidate for parliament and a former head of the bordering Eshkol regional council. “Firing at Israeli communities that border with Gaza is the same as firing toward Tel Aviv, and it’s impossible we will show restraint at the continuous firing.”