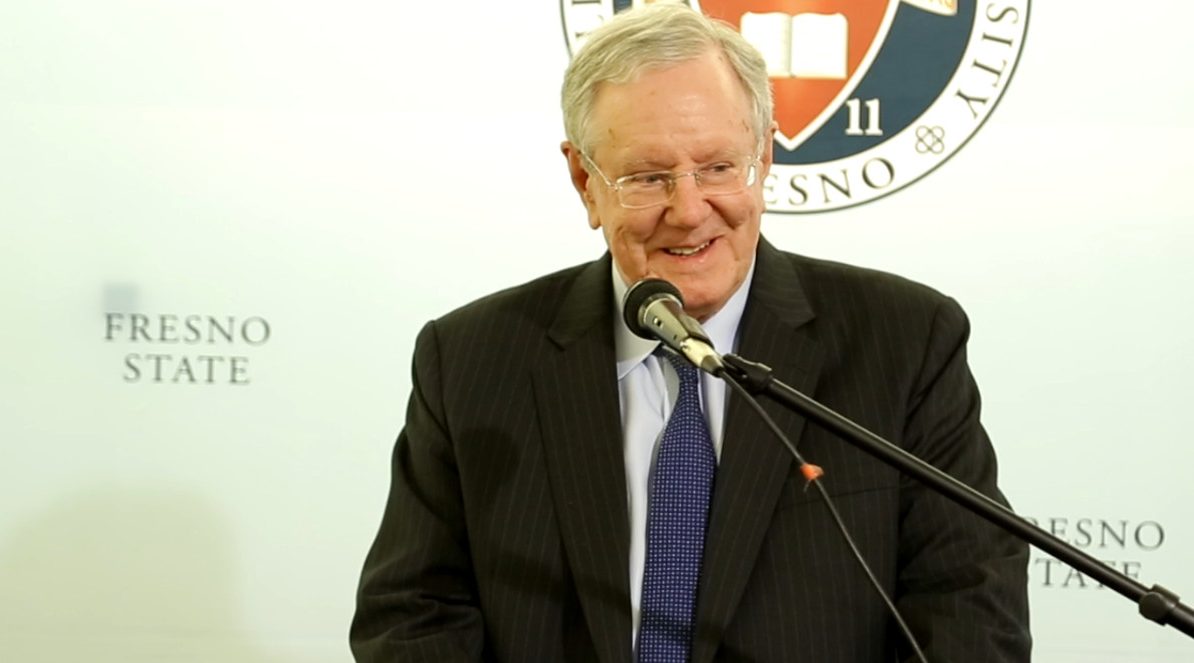 Steve Forbes believes Donald Trump is on the right economic track. But, sometimes, Forbes adds, the president gets in his own way.

The chairman of his eponymously named financial media empire talked to reporters before his lecture Monday evening at the Save Mart Center.

“If (California) made some changes in its regulations, its output would be setting records for the ages.” — Steve Forbes, CEO of Forbes Media

The lecture was to be followed by a question-and-answer session facilitated by Dr. Robert M. Harper, interim provost and vice president for Academic Affairs at Fresno State.

Forbes, a presidential candidate on the Republican ticket in 1996 and 2000, continues to espouse his free-market economic views, shying away from most social topics.

He took continued swipes at overregulation, a taboo in Forbes world.

“If (California) made some changes in its regulations, its output would be setting records for the ages,” he said of the Valley’s agricultural economy.

Click on the video above for the answers to questions posed by GV Wire.

Forbes on Trump, Immigration, and Tariffs

— His thoughts on the Trump presidency

“I’ll be blunt. He’s sometimes is his own worst enemy, in the sense of stepping on his own stories. They’ve done some very good things. On deregulation, very unglamorous … regulation is a form of taxation. What they’ve done in a very systematic way of getting rid of unnecessary rules and regs, is remove a huge burden on business. One I’m mentioning (in my lecture) tonight is manufacturing.

“The economy is in pretty good shape. The first quarter is going to be a bit of a disappointment for a variety of reasons — uncertainty about trade, fallout from the government shutdown, and people wondering what lies ahead in terms of these trade agreements. Once those are resolved, and I think they will be resolved, the economy should do well in the second half of 2019, going into 2020.”

Forbes also praised Trump for going after the Federal Reserve, and called for comprehensive immigration reform.

— On Trump’s tariffs on China

“Tariff is another word for sales tax. So, when we put on tariffs, we are putting on sales taxes on products that American businesses and consumers buy. That leads to retaliation which hurts products we sell elsewhere. … A more productive approach would be going after specific companies, specific industries, specific banks that are carrying out the violations.”

— On Rep. Devin Nunes’ lawsuit against Twitter and some of its users

“One of the things when you get technological advances, you get a whole new law coming with it. I’m not sure (the lawsuit) is going to go very far, but you get a lot of these things. … I can understand his frustration. He’s been treated terribly. He, by golly, has done really courageous work trying to find out what happened in 2016. And, he’s paid a price for it. His family paid a price for it.”

“People like lists because it gives them a snapshot, this case, of what’s happening in the global economy,” he said. “We want to know what is doing well. What area in the world is creating wealth? What businesses are coming up? What businesses are slowing down? What is amazing is how much that list changes each year.”

Forbes said that that the last of the Rockefellers is off the list after the passing of David Rockefeller.