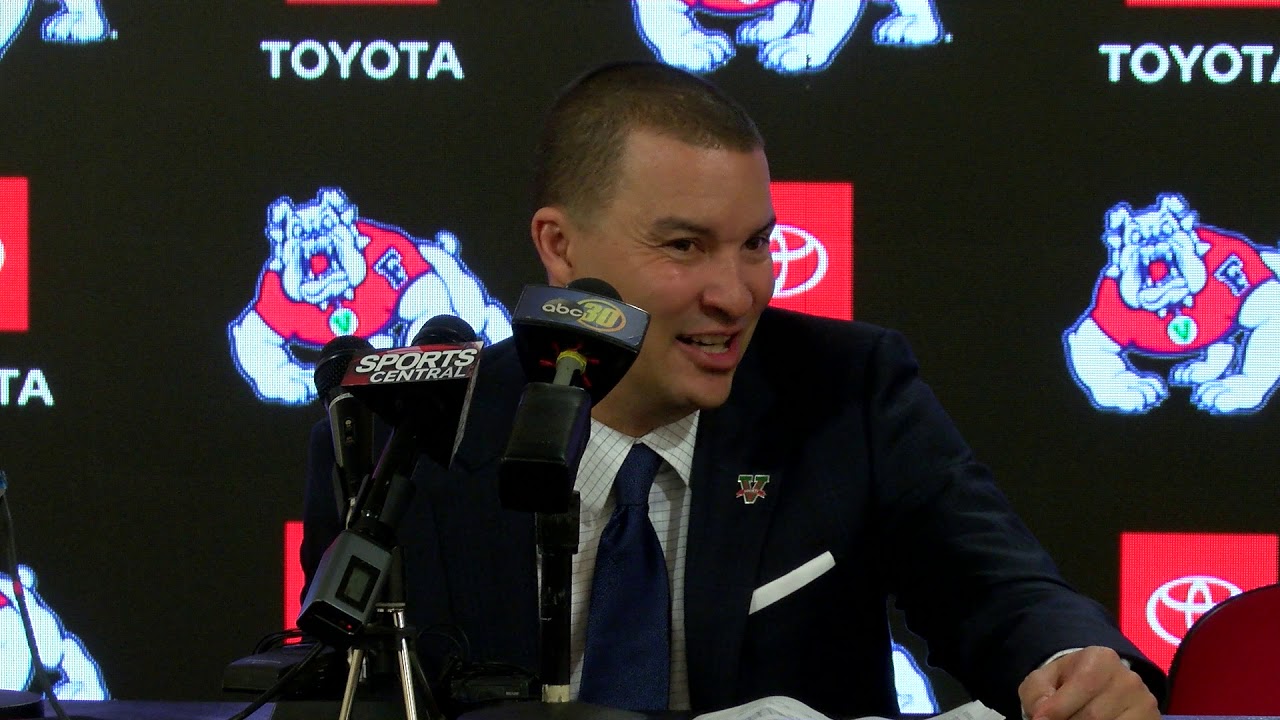 Yes, the Fresno State men’s basketball team can win the Mountain West Tournament and an automatic slot in the NCAA Tournament.

What happened Tuesday night in Las Vegas is evidence of that.

Would 22-8 Fresno State winning three more games under first-year coach Justin Hutson be any more surprising than what 22-11 St. Mary’s pulled off?

Peaking at the Right Time

The third-seeded Bulldogs closed the season impressively. They won at San Diego State — meaning they beat a good team in a tough environment. And then two-time All-MW guard Deshon Taylor, sharpshooter Braxton Huggins, and their teammates rewrote the Fresno State record book in a 121-81 victory over San Jose State at the Save Mart Center.

“I think we have a lot of swag on our team between our guards and our postmen. Once we’re firing on all cylinders we’re a scary team to beat, but oftentimes we beat ourselves so if we can just avoid that, avoid the silly mistakes, avoid the turnovers, we’re a tough team to beat.”

When the Bulldogs Push the Pace, Look Out

When the undersized Bulldogs push the pace, pressure opponents at both ends of the floor, and make their fair share of 3-pointers, they’re virtually impossible to beat — home or away.

This is the time of year when college basketball teams flying under the radar knock off the game’s royalty. Why not the Bulldogs?

But, if they get out of the gate slowly, make careless turnovers, fail to box out on the boards, and have a cold night beyond the 3-point arc, they can fall to anyone. Exhibit A: Their stunning 64-61 home-court loss against Air Force, which had fallen nine straight times in Fresno.

Now the Bulldogs have a chance to redeem themselves. They face Air Force, an 87-56 winner over San Jose State on Wednesday, in Thursday’s quarterfinals.

It helps the Bulldogs that MW kingpin Nevada, despite its 28-3 record, has been vulnerable at times — especially away from the friendly confines of their home court, the Lawlor Events Center.

Once projected as an NCAA Tournament No. 1 regional seed and ranked as high as No. 5 in the nation, the Wolf Pack enters the tournament ranked No. 14 nationally. All of their losses came on the road (New Mexico, San Diego State, Utah State). However, Nevada beat that trio at home by an average of 27 points a game.

If the Bulldogs can win their first two tournament games, it wouldn’t surprise me to see them cut down the nets Saturday night at the Thomas & Mack Center.

Nevada goes into the MW Tournament knowing it already has clinched an NCAA berth. Utah State is positioned for an at-large slot should it not win it all.

I don’t see the Bulldogs’ three seniors — Taylor, Huggins, Bittner — or anyone else on the team crumbling under that pressure. I imagine they welcome it.

But for Fresno State, the only way in is to take the MW crown.

I don’t see the Bulldogs’ three seniors — Taylor, Huggins, Bittner — or anyone else on the team crumbling under that pressure. I imagine they welcome it.

This is the time of year when college basketball teams flying under the radar knock off the game’s royalty.

Why not the Bulldogs?