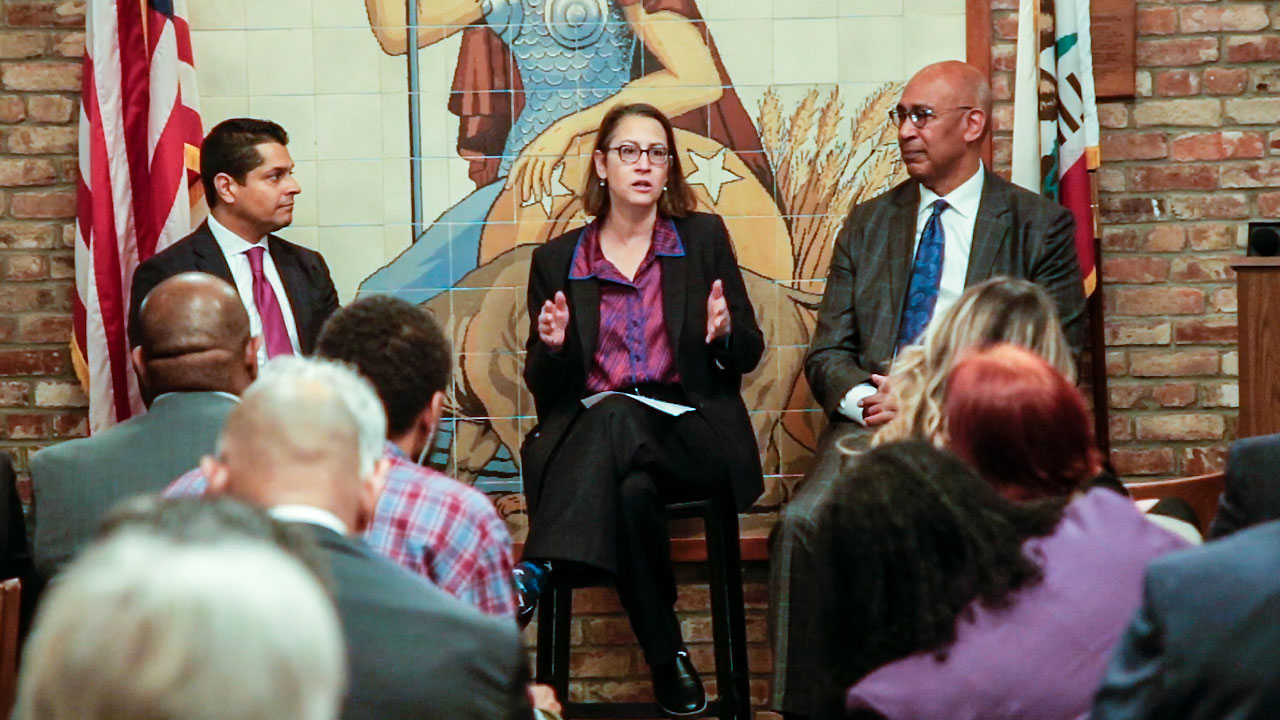 The 2019 legislative session was just getting underway in Sacramento. The ink was barely dry on hundreds of proposed bills (many of them mere placeholders) drafted by Assembly members and senators to address the myriad issues facing those who live, work, and do business in the state of California.

In the Capitol building, dozens of company executives from Central California and Los Angeles crowded into meeting rooms to hear lawmakers, mostly Democrats, describe their top priorities for the year. The business leaders were not hesitant to share their priorities as well.

Environmental regulation reforms, changes to prevailing wage rules, preventing the expansion of rent control, and more flexible zoning for housing are all on their wish list.

Legislators heard the executives out, though they sometimes pushed back against suggestions they start cutting taxes or significantly roll back longstanding regulations.

But they were clearly listening. “We’re tired of just sort of beating our heads against the wall, industry by industry, company by company, city by city, region by region, and not getting the collective outcomes.” — Tracy Hernandez, BizFed CEO

“I think it’s really important that we as legislators and policymakers understand the impacts of the measures that we pass on all of our community including, of course, our businesses,” said Assemblywoman Laura Friedman following a morning question-and-answer session.

This is exactly why the two Business Federation groups, BizFed for short, went to the Capitol. The organization, which was formed in Los Angeles over a decade ago, has now grown to include a Central Valley chapter. For this combined Legislative Day, more than 100 BizFed members from both regions descended on the Capitol to make the case for a more business-friendly California.

‘Give Us a Seat at the Table’

“Our company works from the philosophical approach that regulations are important,” Pollard said. “But we want regulations that are reasonable that are not unnecessarily burdensome either for taxpayers residents or businesses. So give us a seat at the table and we can help you formulate regulations that accomplish your policy goals, but that makes sense for all of us.”

Central Valley BizFed began in 2017 and now includes more than 50 companies and business associations from Madera to Kern counties. It’s modeled after the Los Angeles group, which says it represents more than 400,000 businesses across the Southern California region.

“It was fairly radical 11 years ago when we said, you know, we’re tired of just sort of beating our heads against the wall, industry by industry, company by company, city by city, region by region, and not getting the collective outcomes,” said BizFed founding CEO Tracy Hernandez.

Taking a Page from Labor’s Playbook

The solution, she said, was to borrow from the playbook of an interest group that has grown its influence into a powerful political force.

“What we looked at and recognized was organized labor had their act together,” Hernandez said. “What they did was get all the existing labor groups into one federation. Speak as one voice. Be loud, be clear, be thorough and see it through. And we said let’s do that for businesses.”

Among them was Sen. Scott Wiener (D-San Francisco) who talked with BizFed’s members about his legislation aimed at addressing California’s affordable housing crisis. As chair of the Senate Housing Committee, Weiner has authored a bill that would prevent cities from standing in the way of building high-density housing projects, notably apartments, near public transit stops or job centers. “We need to be careful anytime we talk about reforming CEQA that we’re not undermining its key environmental goals.” — State Sen. Scott Wiener (D – San Francisco)

The bill failed in committee last year after resistance from cities that balked over losing local control of what is built in their communities. BizFed supported the proposal, which Wiener has revived in the current legislative session.

“We need more housing near transportation and where jobs are,” Wiener said. “It’s still a controversial bill, but I’m cautiously optimistic we’ll have more success this year.”

But Wiener is less enthusiastic about another one of BizFed’s priorities — streamlining the environmental review process for major development projects. Business interests see the California Environmental Quality Act, known as CEQA, as an overly burdensome law that is frequently abused by development opponents.

“We need to be careful anytime we talk about reforming CEQA that we’re not undermining its key environmental goals,” Wiener said. While acknowledging BizFed’s concerns, he says, any proposal for revamping the law, “needs to be a broad-based process including environmentalists and labor and others.”

The Democrats’ supermajority status in the Legislature no doubt tempers the policy positions BizFed takes in advocating for changes. The organization calls for selective modifications to the law rather than wholesale repeal. Recommendations include prohibiting anonymous or duplicative CEQA lawsuits; allowing corrections to environmental studies found to be deficient, rather than vacating project approvals; and preventing CEQA lawsuits against voter-approved or voter-funded infrastructure projects.

Assemblyman Heath Flora (R-Ripon) believes BizFed is taking the right approach in engaging, personally, with legislators on both sides of the aisle on policies that affect their industries.

“California is in the midst of an affordability crisis. Residents here pay some of the highest taxes in the nation and costs for everything from food to electric bills continue to go up, pushing more people into poverty.” — BizFed position paper

Building these relationships with like-minded business leaders, I think, is incredibly valuable,” Flora said. “We have the ability to vote with or against them. And if they are not in this Capitol voicing their issues, voicing their concerns on whatever the piece of legislation is, we don’t know how to represent them properly and something may slip through the cracks.”

BizFed came to the Capitol armed with a recent “pulse poll” gauging the attitudes of its members on key issues in the state. While government regulation such as CEQA ranked second in the survey, the top spot went to concerns over taxes and fees. It was the eighth consecutive year the contentious issue ranked first in their poll.

In a position paper delivered to legislators, BizFed warned, “California is in the midst of an affordability crisis. Residents here pay some of the highest taxes in the nation and costs for everything from food to electric bills continue to go up, pushing more people into poverty.” BizFed asked lawmakers to bear in mind the “cumulative effects of taxes, fees, and compliance costs on job creation and economic growth.”

“We can’t keep California working or thriving without a healthy economy that’s driven by business,” Mitchell said. She takes issue, however, with media reports that businesses are fleeing the state to escape high taxes.

“We would often have the state treasurer come literally on the Senate floor and give us their report in terms of how many businesses have left California,” she said. “There’s always kind of competing stories about how many people and how many businesses really are leaving.”

Still, she acknowledges “we probably aren’t growing and launching as many small businesses as we could as a state.” She points to California’s program offering tax credits to the entertainment industry as an example of the legislature’s proactive approach.

“So there are ways in which we are being mindful in supporting business growth and development,” she said.

Agreement That Economic Slowdown is Coming

And despite California’s robust economy and an estimated $21 billion budget surplus, Mitchell says tax cuts are not on the table.

“My short answer would be no,” Mitchell said, pointing to reports from the legislative analyst indicating the possibility of a recession in coming years.

“They tend to think that it’s on a five to seven-year cycle and we’re at year 10,” she says.

Mitchell said her focus is to “make sure that we can continue our progressive forward-thinking, moderate-growth economy. We have infrastructure work to do. We have state colleges and state facilities that are really crumbling down around public employees. We have a DMV that needs support. And so I’m not prepared as budget chair to say that we are in a position such that we can turn money back.” 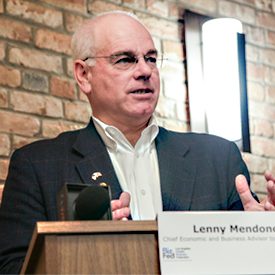 “It’s really important that we are ensuring that we have a budget that works through the full cycle and that we don’t have these ups and downs that when it’s growing we’ve put all kinds of programs in place and we have to cut them when the downturn comes,” Mendonca said.

Hernandez said BizFed members recognize the economy will inevitably slow at some point. She was heartened to hear lawmakers say they are taking a relatively cautious approach to new spending.

That’s a message BizFed members will continue to reinforce in as legislation moves forward in the months ahead. They are working hard to ensure they always have a “seat at the table” on issues that affect hundreds of thousands of LA and Central Valley businesses the organization represents under its umbrella.

“I think it was clear that we have the experts with the employers that are impacted. It’s all jobs, jobs, jobs, all the time if you want to solve these problems,” she said. “We talked a lot about housing supply. So how are we going to build housing supply if businesses aren’t involved in those solutions, working with local government and state government?

“We had 100 hundred people fly up from Southern California and from Central Valley. That was no small task of time, money, input, and energy. They’re very serious about working with the lawmakers.”