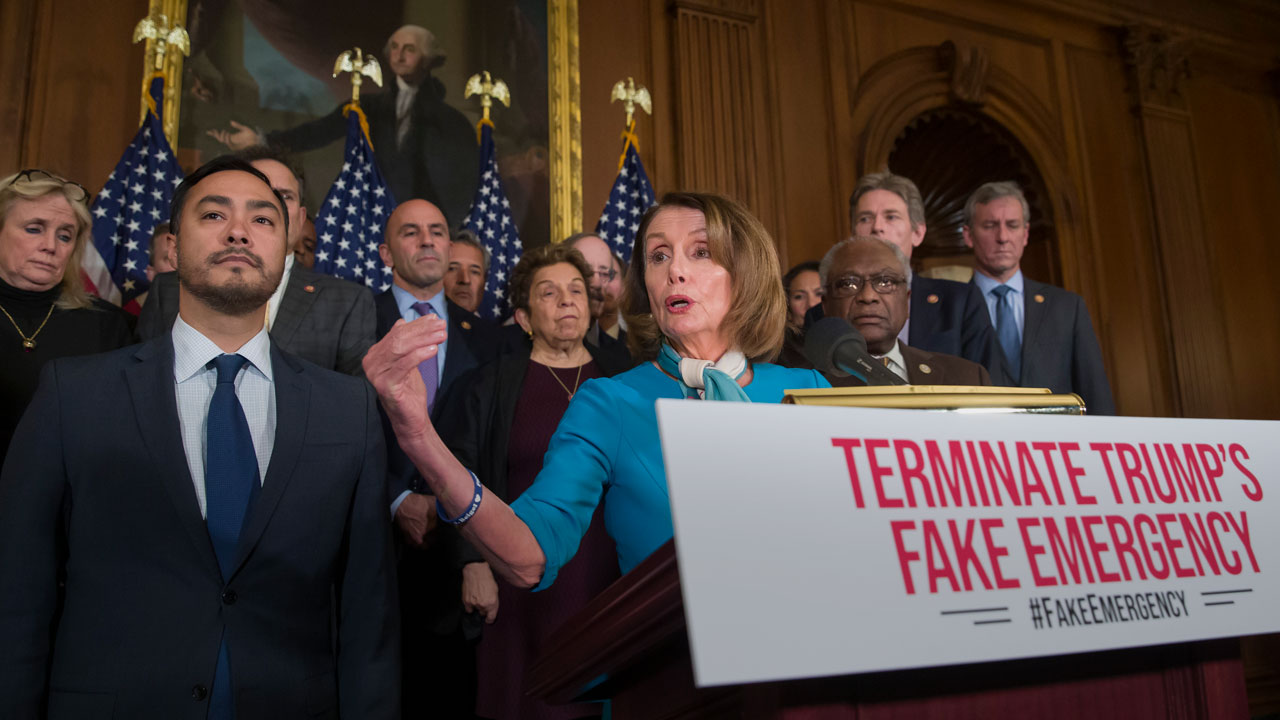 WASHINGTON — Democrats ignored a veto threat and rammed legislation through the House Tuesday that would stymie President Donald Trump’s bid for billions of extra dollars for his border wall, escalating a clash over whether he was abusing his powers to advance his paramount campaign pledge.
The House’s 245-182 vote to block Trump’s national emergency declaration throws the political hot potato to the Republican-run Senate, where there were already enough GOP defections to edge it to the cusp of passage. Vice President Mike Pence used a lunch with Republican senators at the Capitol to try keeping them aboard, citing a dangerous crisis at the border, but there were no signs he’d succeeded.
“I personally couldn’t handicap the outcome at this point,” said Senate Majority Leader Mitch McConnell, R-Ky., who’s planning a vote within the next three weeks.

Senate passage would force Trump’s first veto, which Congress would surely lack the votes to override. But the showdown was forcing Republicans to cast uncomfortable votes pitting their support for a president wildly popular with GOP voters against fears that his expansive use of emergency powers would invite future Democratic presidents to do likewise for their own pet policies.
Underscoring their desire to avoid a tally suggesting that Trump’s hold on lawmakers was weakening, House Republican leaders worked to keep the number of GOP supporters below 53. That’s how many would be needed to reach a two-thirds majority of 288 votes, assuming all Democrats vote “yes,” the margin required for a veto override.
Thirteen House Republicans joined all voting Democrats Tuesday to support the Democratic resolution.
The White House wrote to lawmakers formally threatening to veto the legislation. The letter said blocking the emergency declaration would “undermine the administration’s ability to respond effectively to the ongoing crisis at the Southern Border.”

‘We are at War on the Southern Border’

Republicans said Democrats were driven by politics and a desire to oppose Trump at every turn, and said Trump had clear authority to declare an emergency to protect the country. They also defended the president’s claims of a security crisis along the boundary with Mexico, which he has said is ravaged by drug smugglers, human traffickers and immigrants trying to sneak into the U.S. illegally.
“We are at war on the Southern border with the drug cartels,” said Rep. Pete Olson, R-Texas.
Trump has asserted that barriers would stop drugs from Mexico from entering the U.S. In fact, government figures show that 90 percent of drugs intercepted from Mexico are caught at ports of entry, not remote areas where barriers would be constructed.
Democrats said Republicans repeatedly accused former President Barack Obama of flouting the Constitution, which gives Congress control over spending, but are ignoring Trump’s effort to do the same.
“Is your oath of office to Donald Trump, or is your oath of office to the Constitution?” House Speaker Nancy Pelosi, D-Calif., asked Republicans.
They said Trump’s push for the wall reflected a continuation of the anti-immigrant views that helped fuel his election.
“Since when do we call human beings in need a national emergency?” said Mexican-born Rep. Jesus “Chuy” Garcia, D-Ill. “Is he running out of insults for people like me?”
Democrats also said the crisis is a fiction manufactured by Trump to dance around Congress’ vote this month to provide less than $1.4 billion for barrier construction. That was well below the $5.7 billion Trump demanded as he futilely forced a record-setting 35-day federal shutdown.

“The president does not get to override Congress in a raucous temper tantrum over his inability to broker a deal” with lawmakers for more money, said Rep. Hank Johnson, D-Ga. Rep. Joaquin Castro, D-Texas, sponsor of the one-sentence measure blocking the declaration, called Trump’s move “constitutional vandalism.”
Trump used a 1976 law to declare a national emergency and ordered the shift of $3.6 billion from military construction projects to wall building. Citing other powers, he intends to shift another $3.1 billion from Defense Department anti-drug efforts and a fund that collects seized assets.
The money would be used to build steel barriers up to 30 feet tall and other barriers and for “law enforcement efforts,” said a White House statement.
In the Senate, three Republicans have said they will back Democrats’ drive to block the emergency declaration: Maine’s Susan Collins, Alaska’s Lisa Murkowski and North Carolina’s Thom Tillis. One more GOP defection would provide enough votes to approve the Democratic measure, assuming all Democrats and their independent allies back it.
Republicans said senators asked Pence numerous questions about which projects Trump would divert to pay for the wall, with Sen. Richard Shelby, R-Ala., saying the discussion was “hearty.” Shelby, who chairs the Senate Appropriations Committee, which controls spending, said his panel would quickly “backfill” money for military construction with other funds he did not identify.
“That issue won’t stay alive long,” Shelby told reporters.

Sen. John Thune of South Dakota, the chief GOP vote counter, said there may be GOP attempts to amend the House measure, saying Republicans “think they have amendments that would improve it.”
That suggests that McConnell may try finding a way to add language that could sink the Democratic resolution or, perhaps, make it more palatable for Republicans. The law requires the Senate to vote on a measure within 18 days of receiving it from the House.
Though presidents have declared 58 emergencies under the law, this is the first aimed at acquiring money for an item Congress has explicitly refused to finance, according to Elizabeth Goitein, co-director for national security at New York University Law School’s Brennan Center for Justice. This is also the first time Congress has cast votes on whether to annul an emergency declaration, she said.
Even with Democrats’ effort near-certain to ultimately fail, several lawsuits have been filed aimed at blocking the money, including by Democratic state attorneys general, progressive and environmental groups. Those suits at the very least are likely to delay access to those funds for months or years.