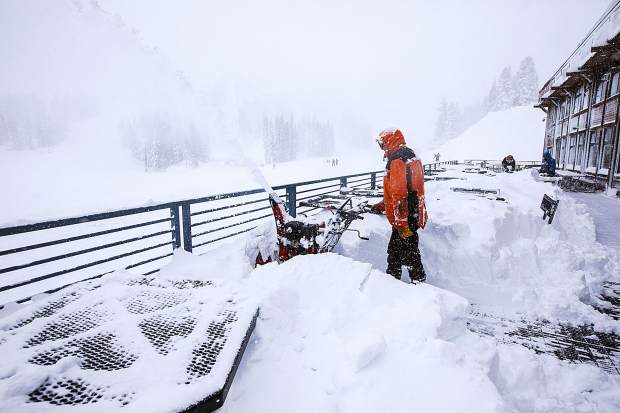 Skiers eager to hit the slopes had to sit out a Presidents’ Day holiday weekend as heavy snow and rain fell for a fourth straight day Friday in California’s mountains, where the snow was so deep in some areas plows couldn’t go out and cities were running out of places to pile it.
Several routes to the ski mecca of Lake Tahoe were closed Friday, including about 70 miles of Interstate 80 from Colfax, California, to the Nevada state line. Chains were required for travel in many other parts of the towering range.
“They have ordered up a large blower to try and clear the pass,” Placer County Sheriff Lt. Andrew Scott said in a tweet he posted with a video of a snow-covered I-80. “Please stay home.”

Tahoe & Truckee are in whiteout conditions. All roads leading in & out of the basin are closed. S/R 267 is so deep that plows ca no longer plow. They have ordered up a large blower to try and clear the pass. I80 & Mt. Rose Highway are also closed. Please stay home. #CAwx pic.twitter.com/7DQkJzkxIO

The storm is forecast to dump between 3 and 6 feet of fresh snow in a region where some ski resorts reported getting 3 feet of snow since Thursday. An avalanche warning was issued for the greater Lake Tahoe Area, where heavy snow and high winds are forecast through Sunday.
It’s snowed so much recently that cities are running out of places to put the snow, said Kevin Cooper, marketing director for Lake Tahoe TV.
“All avid skiers are itching to get out on the mountain but the roads are pretty treacherous right now,” he said.
Some skiers canceled their plans after seeing the reports.
Aura Campa, of Oakland, and her partner were hoping to take advantage of their season passes and the fresh powder at Squaw Valley-Alpine Meadows resort, but a scary near-accident on an icy road last weekend made them reconsider.
When a main highway through the Lake Tahoe area was crushed with traffic, she drove her SUV on a side road. Her vehicle didn’t have chains, and when it was going uphill the vehicle went into reverse.
“That was really scary for us. It was on a tiny hill with a small amount of ice but that was enough for us to think twice about traveling through a snowstorm again,” Campa said. “We’re not going to risk it.”

About 140 miles southeast of Lake Tahoe, Mammoth Mountain was about to break a more than 30-year record for monthly snowfall but skiers and snowboarders should be able to reach the slopes as long as they have chains or snow tires, said resort spokesman Justin Romano.
The resort has already gotten 163 inches of snow this month, just 5 inches shy of its monthly snowfall record for the month of February 1986.
The main route there, Highway 395, has been experiencing closures because of dangerous driving conditions but was open Friday to those with the proper gear.
“The winds have calmed down and it looks like it’s going to be an awesome weekend to get people up here,” Romano said. “We’re stoked to have them.” 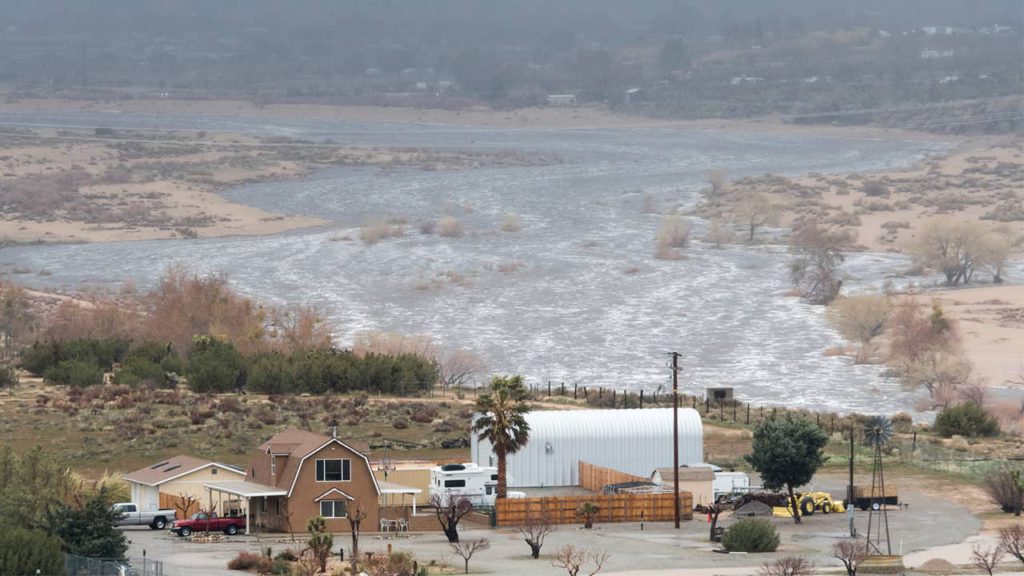 In other parts of California, crews turned to clean-up and damage assessment as the drenching storm brought flood dangers to Arizona.
Warnings were issued for Guerneville north of San Francisco as the Russian River surpassed flood stage, and the San Francisco Bay Area commute was snarled after a levee breach partially flooded a highway.
There were at least two deaths. A woman pulled from rising water in a flood-control channel in Corona, southeast of Los Angeles, had a heart attack and died at a hospital. And the body of an unidentified man was recovered from a fast-flowing creek in Escondido, northeast of San Diego.
Arizona and other parts of the West on Friday dealt with effects of a blitz of winter weather.
Firefighters rescued a motorist who called 911 to report his car was being swept down a wash in Tucson, Arizona, by runoff.
Residents were being helped after homes along a creek 50 miles (80 kilometers) south of Flagstaff received up to several feet of water, said Yavapai County Sheriff’s spokesman Dwight D’Evelyn.
Road crews in parts of Colorado, Montana, and Wyoming worked to clear avalanches that had closed mountain highways and to mitigate potential avalanche threats.
Similarly, dangerous travel conditions, as well as power outages, flooding, and road closures were cited in a decision to cancel classes in seven school districts in San Diego County.
Related Topics:CaliforniafloodingLake TahoeMojave RiverPlacer County sheriffSierrasnowstay homewhiteout
Up Next