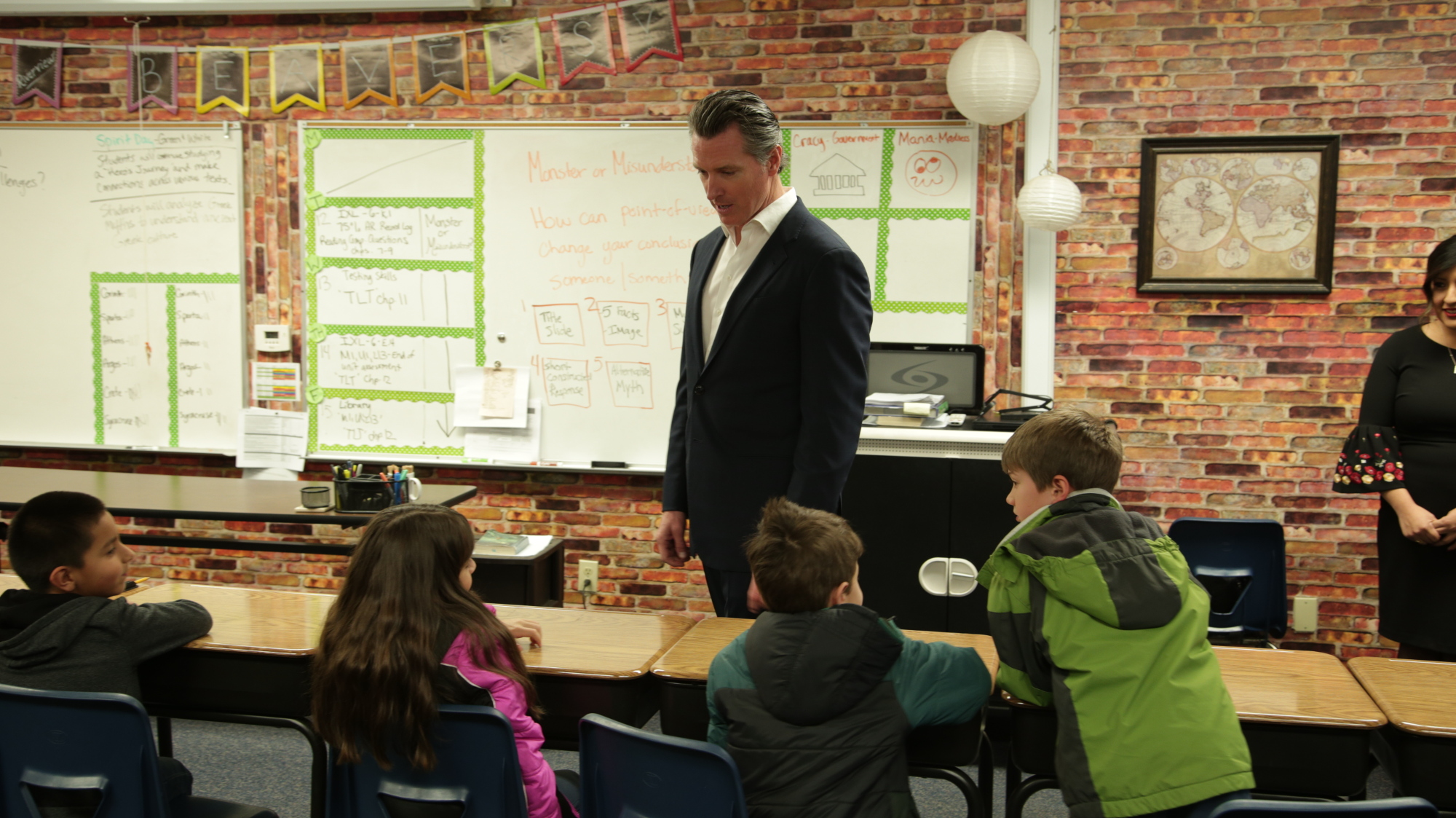 Gerard Lyons didn’t quite know what was going on. The 8-year old Riverview Elementary second-grader normally would be heading home on a Wednesday early release schedule. Instead, he sat in a classroom, full of news cameras in the back and important-looking people crowding the door.
Gerard and his friend Owen knew that Donald Trump was the president. They knew Trump can’t spell “hamburger.” It was only after an aide of the governor whispered in their ears that they knew who was going to pay them a special visit, and what he did.
“He’s the president of California,” Gerard said. In some ways, he’s right.
Gavin Newsom visited the Central Valley for the first time since taking office six weeks ago. And, he signed his first bill, AB 72. The budget bill passed both houses of the Legislature with nary a “no” vote. 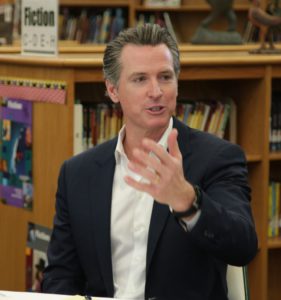 “The idea that I drop my kid off and be scared to death that they use a drinking fountain, something we took for granted when we grew up? That’s pretty phenomenal.”—Gov. Gavin Newsom
The bill provides $131 million in emergency funds, including $10 million for safe drinking water for schools like Riverview, which is near Reedley. The money is from the state’s General Fund,
“We’re grateful to all of you who participated as taxpayers in supporting these efforts,” Newsom said with a smile.
Last spring, officials deemed the water at Riverview unsafe. Notices, posted on the water fountains, warn of high levels of 1,2,3-trichloropropane (TCP).  The standard for safe water is 0.005 micrograms per liter (ug/L). The 1,2,3-TCP at Riverview is 24 times as high as the standard.
Trustees with the Kings Canyon Unified School District say the water quality didn’t change, but state standards did.
The taps are turned off, and water coolers are stationed around campus.

For Newsom, the thought of parents rushing to school to drop off water bottles their kids may have forgotten was too much to bear.
“It’s disgraceful, it’s an embarrassment and God bless those parents for giving a damn about their kids,” Newsom said. “And thank you to the school district for letting them know about it and having the courage to do something about it. They need our support. I need to have their back. I need to have their parent’s back.
“The idea that I drop my kid off and be scared to death that they use a drinking fountain, something we took for granted when we grew up? That’s pretty phenomenal. We can’t even provide basic drinking water to a million-plus Californians? Pathetic.”


Related Story: Gavin, This Bargain Project Will Make You a Water & Parks Hero

The governor charmed about 20 students of varying ages while affixing his name to AB 72. He asked questions as if he were Steve Harvey hosting TV’s “Little Big Shots.”
Newsom’s message to the scholars: You don’t have to be an elected official to engage in change. He mentioned Cesar Chavez, Martin Luther King Jr., and Gandhi as examples.
A few minutes after the ceremony, Gerard’s lesson in civics seeped away. It took prodding from a nearby school official to remember what the governor does. But, Gerard did know who the Democrats are: “People who are voting against Donald Trump.”

How Much Snow at Mammoth? Enough to Last Until 4th of July.