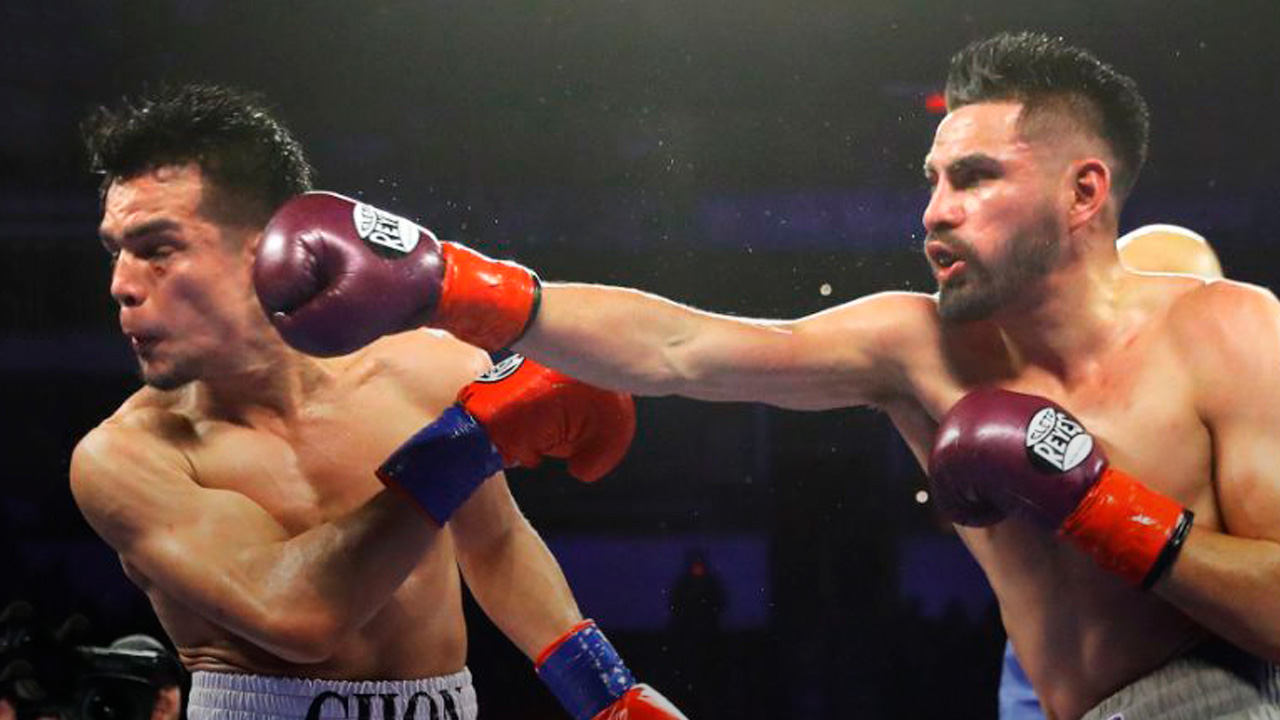 Jose Ramirez dug deep Sunday night to retain his world title belt and preserve his undefeated record.
Sensing that he needed to do a lot more to keep his World Boxing Council 140-pound crown, Ramirez dominated the second half of the bout in a narrow 12-round victory over southpaw challenger Jose “Chon” Zepeda.
Ramirez’s furious rally led to a dramatic reading of the scorecards for ESPN ‘s national audience and a sold-out crowd of 14,034 at the Save Mart Center.
While judge Rey Danseco called it a draw (114-114), the two other judges, Chris Tellez (116-112) and Glenn Trowbridge (115-113) scored Ramirez as the winner. All three judges awarded Ramirez the final round.

This Time, Roach Is in Opponent’s Corner

Ramirez had to overcome Zepeda’s skills and courage — and the presence of his former trainer, Hall of Famer Freddie Roach, in the opponent’s corner — in the toughest test of his career.
Roach prepped Ramirez and was in his corner when Ramirez claimed the title by out-pointing Amir Imam last March. But Ramirez then hooked up with trainer Robert Garcia after that.

Both Boxers Say Crowd Was a Factor

Afterward, the Valley native said that his cheering fans helped him in his second successful WBC super-lightweight title defense. His pro record is unblemished at 24-0.
“I felt very motivated by the crowd cheering me on” Ramirez said.
Zepeda (30-2, 25 knockouts), who was born in Long Beach and lives in La Puente, acknowledged that the crowd appeared to fuel Ramirez’s comeback. But he also said that Ramirez simply had more stamina than he did.
“Jose Ramirez, I think his people helped him a little bit,” Zepeda said. “If it were me and my people were cheering me, I would have had a little extra motivation. A little bit, at least. But he’s a tough fighter. I knew I had to come in here with conditioning and yeah, I think maybe that’s what it was: I was a little short on conditioning.”

Both guys leaving it all in the ring at the end of the fight 👏#RamirezZepeda pic.twitter.com/yiqYls6xS3

What’s Next for Ramirez?

As for what might be next in his career, Ramirez afterward sounded more inclined to try and unify the 140-pound crown than to move up to the 147-pound welterweight division.
The other 140-pound titleholders are Maurice Hooker (WBO), Ivan Baranchyk (IBF), and Kiryl Relikh (WBA).  Ramirez noted that he doesn’t have difficulty making the 140-pound weight limit.


Related Story: Is Jose Ramirez the Best Boxer Ever from Fresno Area?

According to CompuBox, the 26-year-old Ramirez threw more punches (622-601) and landed more punches (200-149) than his opponent, thus backing up the majority verdict. Ramirez also had the clear edge in power punches, connecting on 172 compared to Zepeda’s 110.
Ramirez built his comeback on a combination of body shots and big hits to Zepeda’s chin.
“He was very tough, very crafty,” Ramirez said. “It took me a while to close the distance. It was a very close fight.”

After #RamirezZepeda, @CrystinaPoncher spoke with @RAMIREZBOXING about the challenges he had to overcome in the fight and what he wants to do next. pic.twitter.com/vBZcgdhSKc