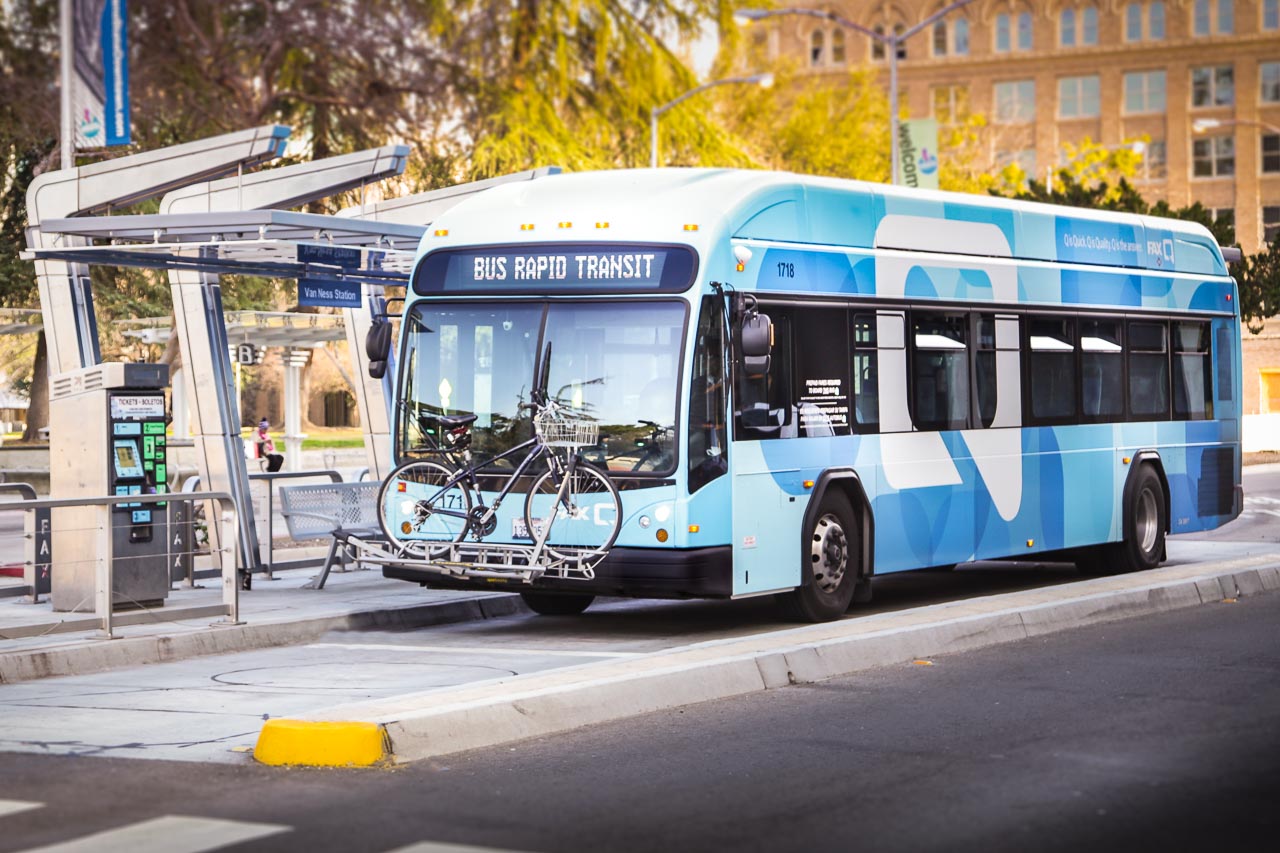 Nearly a year after the launch of Bus Rapid Transit, what conclusions can be drawn about the $56.2 million upgrade to Fresno’s mass transit system?
For starters, frequent riders praise it. So does Mayor Lee Brand. 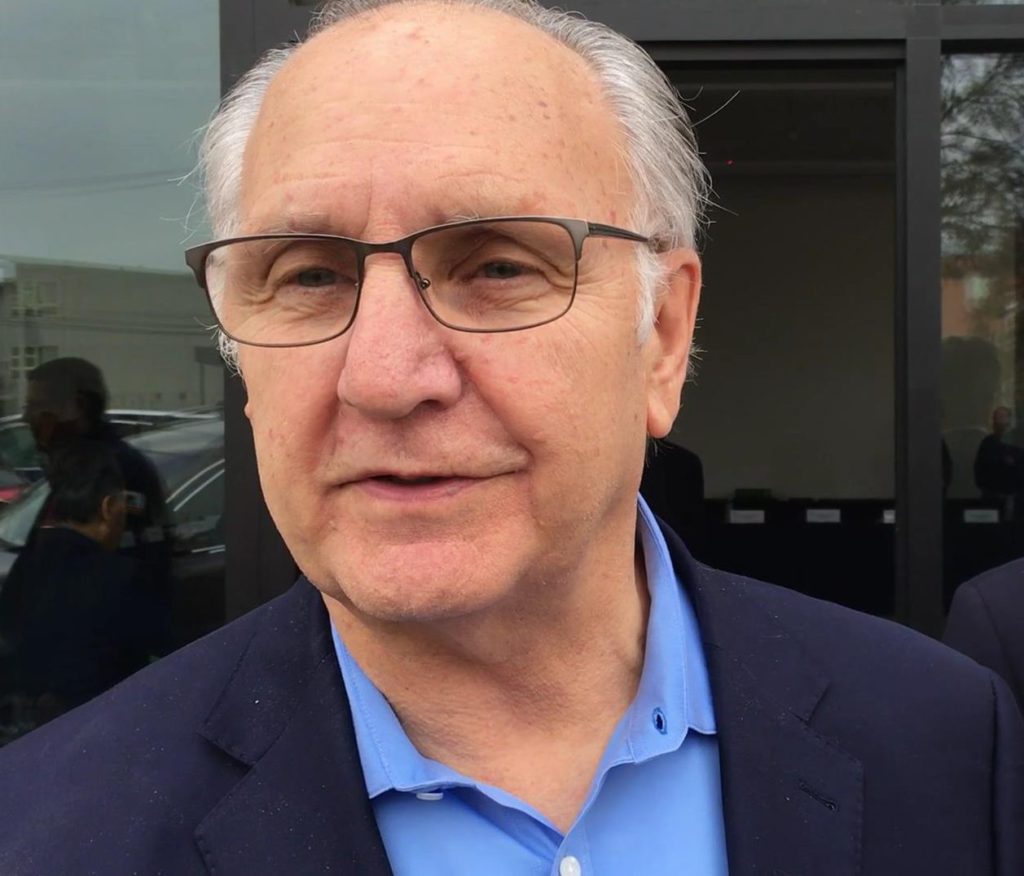 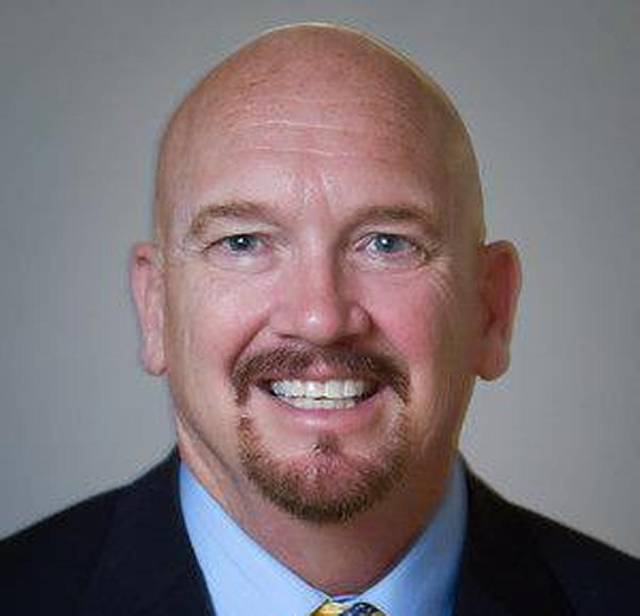 “The whole bus system helps a few people, and Bus Rapid Transit is just a slice of the bus system. I don’t see it as transformational.”— City Councilman Steve Brandau
In addition, the future of mass transit is murky with technology offering a broad array of possibilities.
Shared Autonomous Vehicles will be here in the next 10 to 20 years, says Aly Tawfik, director of the Fresno State Transportation Institute.
“The cost of an autonomous taxi can be as cheap as a bus and people will start using them and will stop using buses,” Tawfik said. “It is not expected to happen anytime soon, so I think our BRT system is safe for now.”
But there is one thing many agree on: With the automated kiosks often broken, up to 25 percent of riders are boarding for free.
“I don’t know if (the kiosks are) a good idea anymore,” says bus driver Al Munoz, who is president of the transit union. “Eventually, none of them will work.”
Now let’s take a ride and explore BRT — where it runs, how it was built, the system’s goals, and what the future might hold.

Significant Drop in Ridership Before BRT

Supporters set ambitious goals for Fresno BRT when it was first proposed more than a decade ago.
“The overall vision of the BRT Master Plan is to demonstrate how improved efficiency, speed, and service can attract new transit ridership, improve customer satisfaction, and benefit the broader community by providing a quality of service similar to light rail systems through the use of bus technology,” said the authors of a 2008 report from the Fresno Council of Governments.
Fresno, like many other cities across America, has seen its transit use fall in recent times. Nationally, ridership has declined by about 7% over the past 10 years.

Fresno’s drop was significantly more severe. Between 2010 and 2017, FAX ridership fell 45 percent, from nearly 18 million annual passenger trips to fewer than 10 million. FAX officials point to bus fare increases in 2011 and slower service times on some routes as contributing factors.

In 2018, following the introduction of BRT service, Fresno FAX ridership rose slightly overall, adding nearly 75,000 passenger trips.
“It’s got great ridership right now,” said Fresno transportation director Greg Barfield about BRT. “But we want to see more folks experience the Q.”
Formally named FAX Q, a fleet of dedicated BRT buses provides service along a 16-mile route, primarily on Blackstone Avenue and Kings Canyon Boulevard. The buses run every 10 minutes during morning and afternoon peak hours and every 15 minutes midday. The service has achieved a 97% on-time record since it began in February 2018.
Bus frequencies on other FAX routes range from 15 to 30 minutes, with significantly longer wait times during evenings and weekends on some routes.

The BRT system accomplishes a higher level of service through fewer route stops, faster boarding, and traffic signal prioritization. The design of the BRT system also largely avoids the use of bus-bay cutouts along the route. This means buses remain in their lane of travel and can immediately continue their route without having to merge back into traffic after a stop. That design choice has drawn complaints from motorists who are forced to stop and wait behind a bus while it loads or unloads passengers. At peak commute times, cars can back up into an intersection until the bus departs the stop.


“It is a really peaceful, quiet ride, and they are always on time.” — Melvin Lester, BRT rider
Barfield says the overall approach actually minimizes traffic delays. “That’s how it continues to be quick and efficient,” Barfield said. “Because we open up both the front and back door, we are now loading faster than what we would traditionally load at a regular bus stop so we are blocking a lane for less time.”

Riders on FAX Q have logged 1.9 million trips through December 2018, Barfield said. Many passengers are pleased with its reliability.
Melvin Lester, who rides BRT daily, says he has been “very satisfied” with his experience. “It is a really peaceful, quiet ride, and they are always on time,” he said.
Patrick Hopkins agrees: “I like the BRT bus because it gets me to my destination a lot faster.”
Comments like those confirm Brand’s view that there’s a demand for Fresno’s BRT service. “Last November, we had 230,000 riders on BRT alone,” Brand said. “Overall, FAX ridership is up almost 10 percent from 2017.”

To achieve those results, the city spent $56 million to build out 16 miles of BRT infrastructure and purchase the buses and fare kiosks that make the service possible. That’s on top of $53 million in annual costs to operate the FAX system, including BRT.


The city spent $56 million to build out 16 miles of BRT infrastructure and purchase the buses and fare kiosks that make the service possible. That’s on top of $53 million in annual costs to operate the FAX system, including BRT.
Most of the capital funding ($39.5 million) came from a grant from the Federal Transit Administration. The remainder ($16.7 million) came from state and local sources, including Fresno’s Measure C transportation tax.
Fresno State’s Tawfik says turning around the image of Fresno’s transit system is essential to its future viability. “People do not ride buses because they don’t think buses are efficient or provide a good quality of travel.” Tawfik said infrequency of buses is also usually to blame when ridership drops.
“Buses become less frequent because nobody is riding them,” Tawfik said. “Then we have less people riding the bus, and this loop keeps on going on and on, and on.”
Fresno’s BRT service attempts to address both issues with its 10-minute frequencies and newer, cleaner buses. Q buses are also WiFi capable, a feature FAX plans to add in the future. 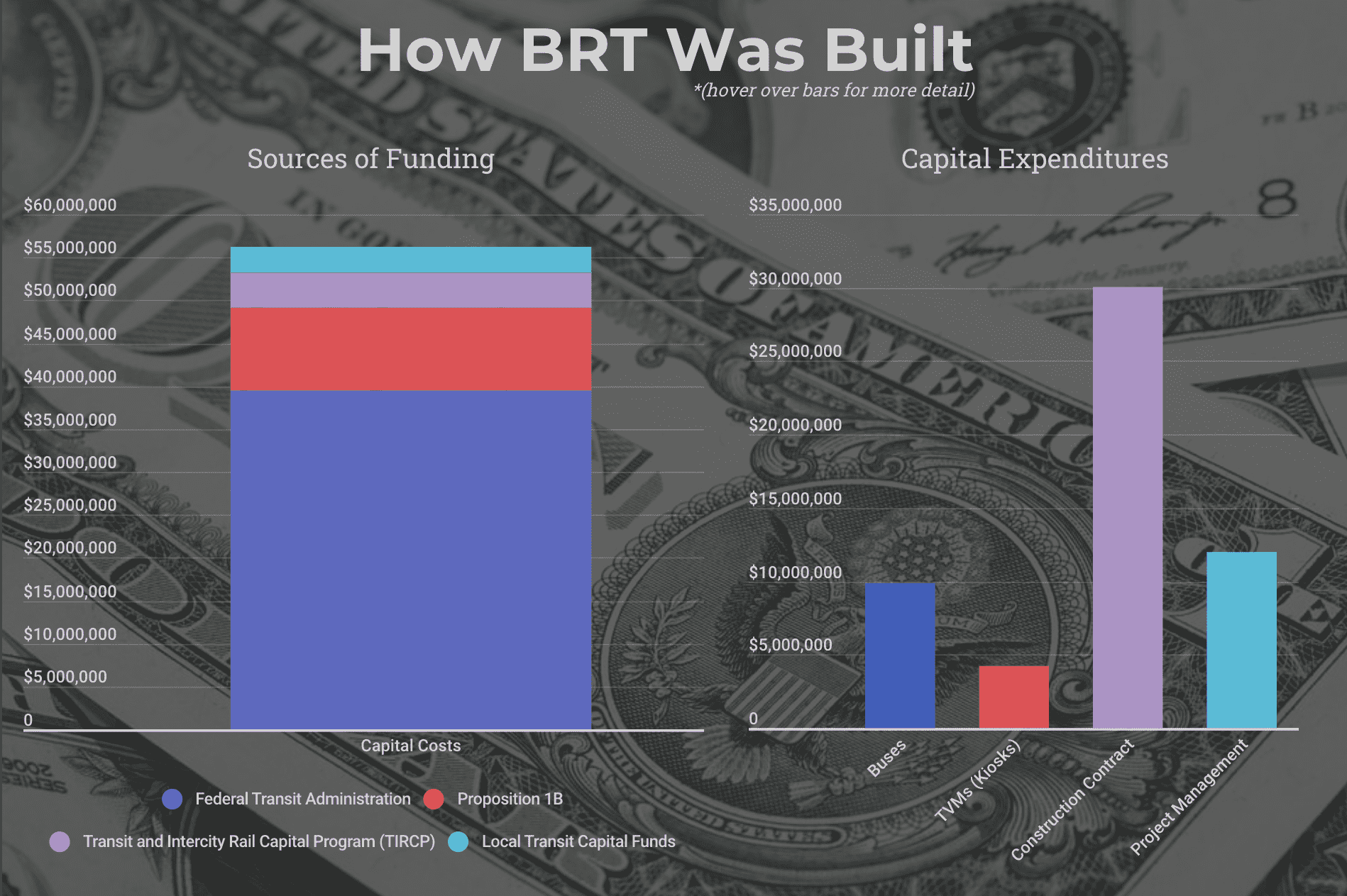 “Fresno is 20 years behind in transit so it is a step in the right direction,” said bus drivers’ union president Munoz about BRT.
Brandau disagrees.
“Rather than pump money into the dinosaur model, I would try partnerships with Uber, Lfyt and other service providers,” he said. “See if they can do it better because they are clearly the next generation.”
That hasn’t happened, so the city is clearly hoping its big bet on BRT pays off. In fact, its ability to attract riders is critical to the health of the FAX system overall.

State law requires FAX to recover 20 percent of certain operating expenses from the fare box to remain eligible for state transportation funds. In 2018, FAX’s $6.7 million in fare revenue just met that threshold.
How much of it came directly from the BRT service is unclear because the city doesn’t tally costs and revenues for each service separately.
“It’s too challenging to track,” said Mark Standriff, the city’s director of communications and public affairs. “Salaries and benefits are the major cost for the system and our bus drivers switch between these systems frequently.”

Beyond fares, the daily operation of FAX is made possible primarily through dollars provided by Sacramento and Washington.
The Federal Transit Administration will send Fresno nearly $15 million in funding for FAX this year. The state’s Transportation Development Act provides $21 million derived from sales and gas tax revenue, and Fresno County’s Measure C transportation sales tax increment contributes another $10.5 million. FAX is also generating $200,000 in revenue through a bus advertising contract. 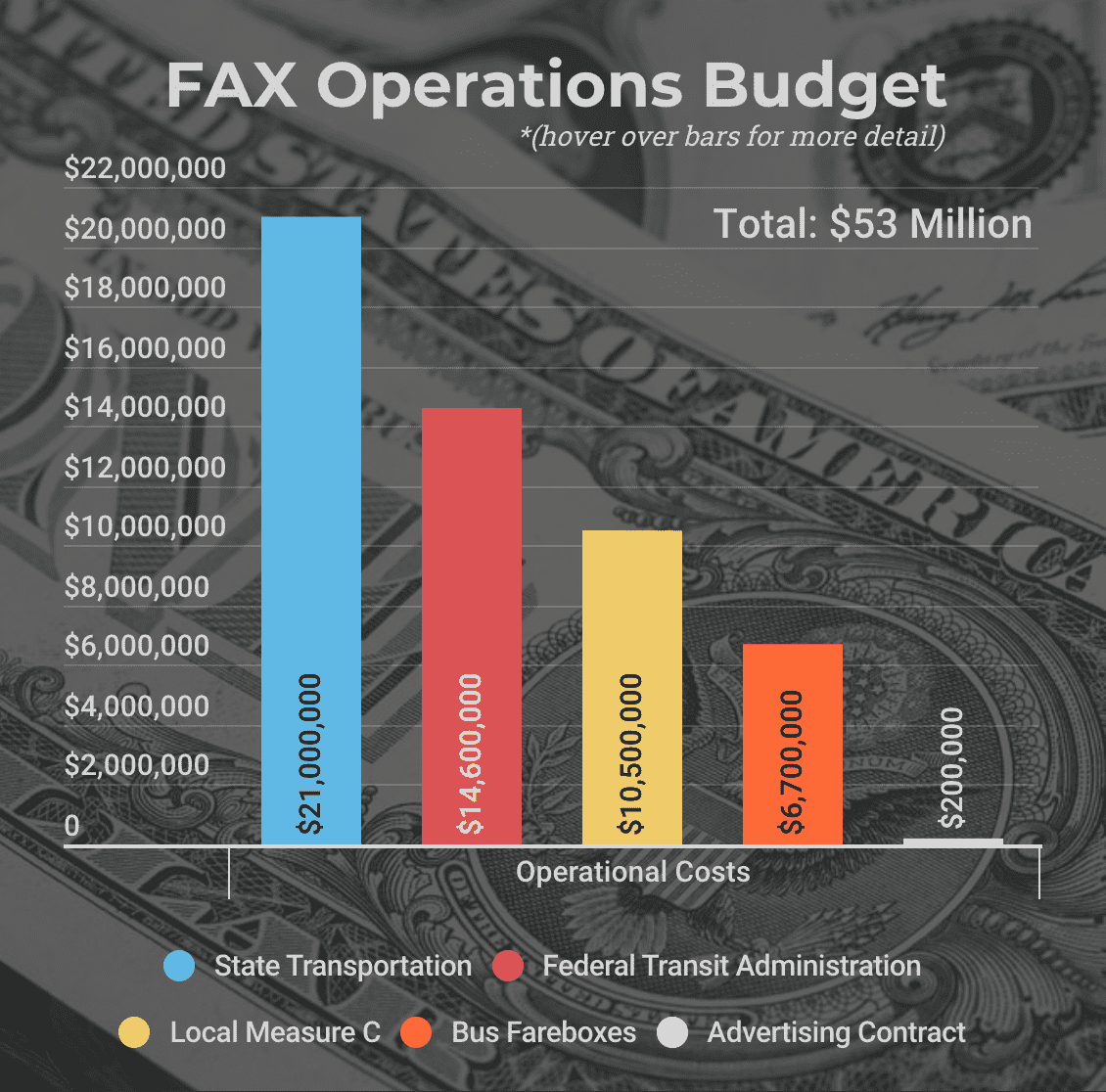 Subsidies such as these are nearly universal for transit systems wherever they operate. Yet, mass transit “typically pays for itself in congestion relief benefits for mid- to large-sized urban areas,” according to the Mineta Transportation Institute at San Jose State University.
A 2015 analysis of cost-benefit studies by the institute found that transit contributes jobs and stimulates local economies. Public transit also expands access to medical care and education, the study showed, while improving health outcomes and air quality — and reducing accidents.
Fresno officials say they’re pleased with BRT so far and future expansion of the service is a possibility. But Barfield is focused on more immediate goals.

Down the line, Brandau’s point about teaming up with private ride-sharing companies could become a viable model, researchers say. Studies conducted by several universities indicate that “ride-hailing” is cutting into transit ridership.
“People are choosing ride-hailing because transit does not match the comfort and convenience offered by private vehicles,” three UC Davis researchers wrote in an op-published last summer by GV Wire. For those who can afford such alternatives, BRT will never match the on-demand, point-to-point service they offer.
But collaboration with these so-called private mobility companies could ultimately enhance the appeal of traditional mass transit services.
In Fresno’s case, perhaps, expanding the reach of FAX — a request that often shows up on rider wish lists — might be accomplished via publicly subsidized partnerships to benefit all who rely on public transportation.