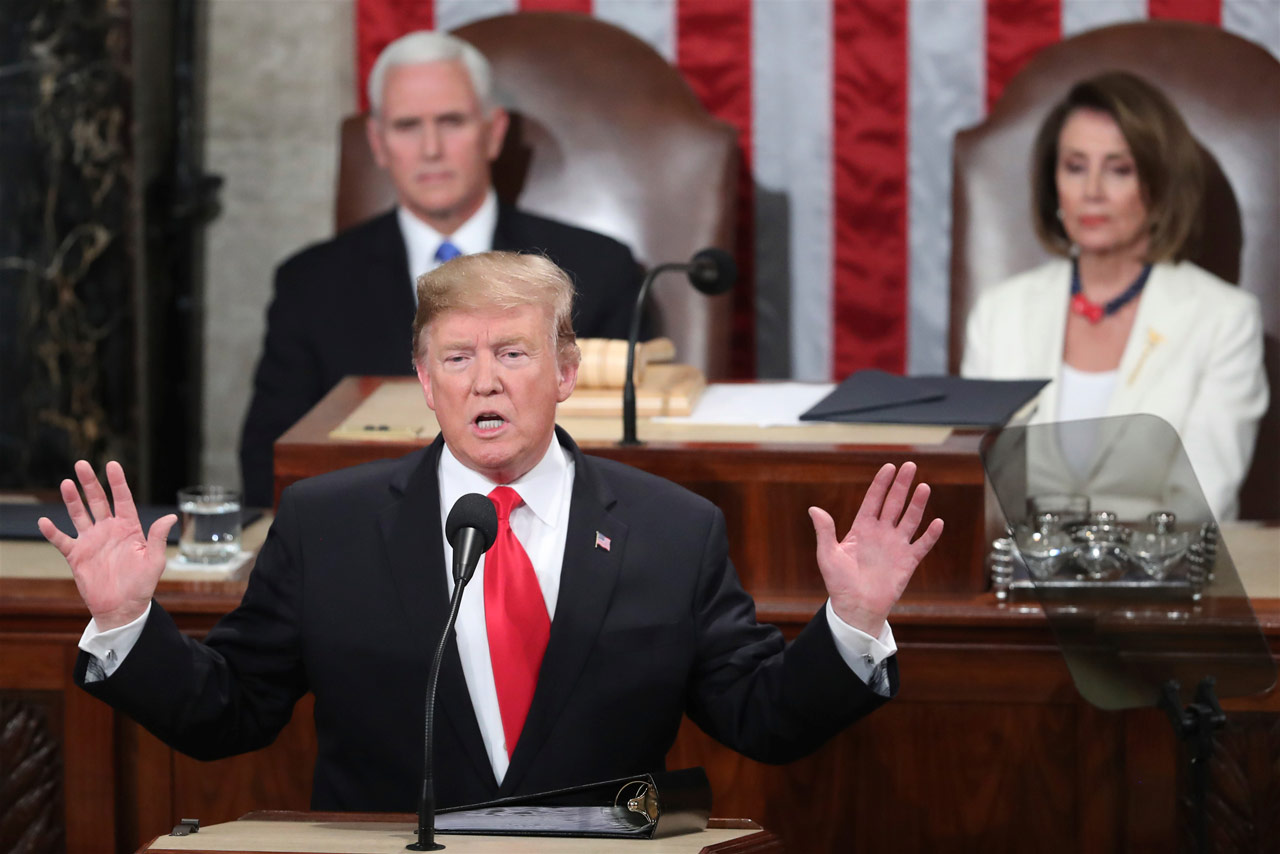 WASHINGTON — In his first State of the Union address to a divided Congress, President Donald Trump warned Democrats on Tuesday that “ridiculous partisan investigations” could derail the nation’s economic progress.
Trump peppered his speech with calls for bipartisanship, urging Washington to govern “not as two parties, but as one nation.” But his message clashed with the rancorous atmosphere he has helped cultivate in the nation’s capital, as well as the desire of most Democrats to block his path during his next two years in office.

President Trump just hit it out of the park. He offered a vision of America that both parties can support.
Now, Democrats have a choice. They can continue to resist or they can choose to work together to keep making America greater than ever. #SOTU pic.twitter.com/255UjAMgSW

Trump: ‘I Will Get Wall Built’

Trump’s speech to lawmakers and the nation comes at a critical moment in his presidency. He pushed his party into a lengthy government shutdown over border security, only to cave to Democrats. With another shutdown deadline looming, the president has few options for getting Congress to fund a border wall, and he risks further alienating his party if he tries to circumvent lawmakers by declaring a national emergency instead.
Trump made no mention of an emergency declaration his remarks. And though he offered a lengthy defense of his call for a border wall, declaring, “I will get it built.” But he delivered no ultimatums about what it would take for him to sign legislation to keep the government open.
“I am asking you to defend our very dangerous southern border out of love and devotion to our fellow citizens and to our country,” he said.

In his speech, Trump also planned to announce details of a second meeting with North Korea’s Kim Jong Un, outlining a summit on Feb. 27 and 28 in Vietnam, according to his prepared remarks. Trump has been teasing the meeting in recent weeks. The two met last summer in Singapore, though that meeting only led to a vaguely worded commitment by the North to denuclearize.
As he stood before lawmakers, the president was surrounded by symbols of his emboldened political opposition. House Speaker Nancy Pelosi, who was praised by Democrats for her hard-line negotiating during the shutdown, sat behind Trump as he spoke. Many House Democratic women wore white, the color favored by early 20th-century suffragettes. And several senators running for president were also in the audience, including Sens. Kamala Harris of California and Cory Booker of New Jersey. 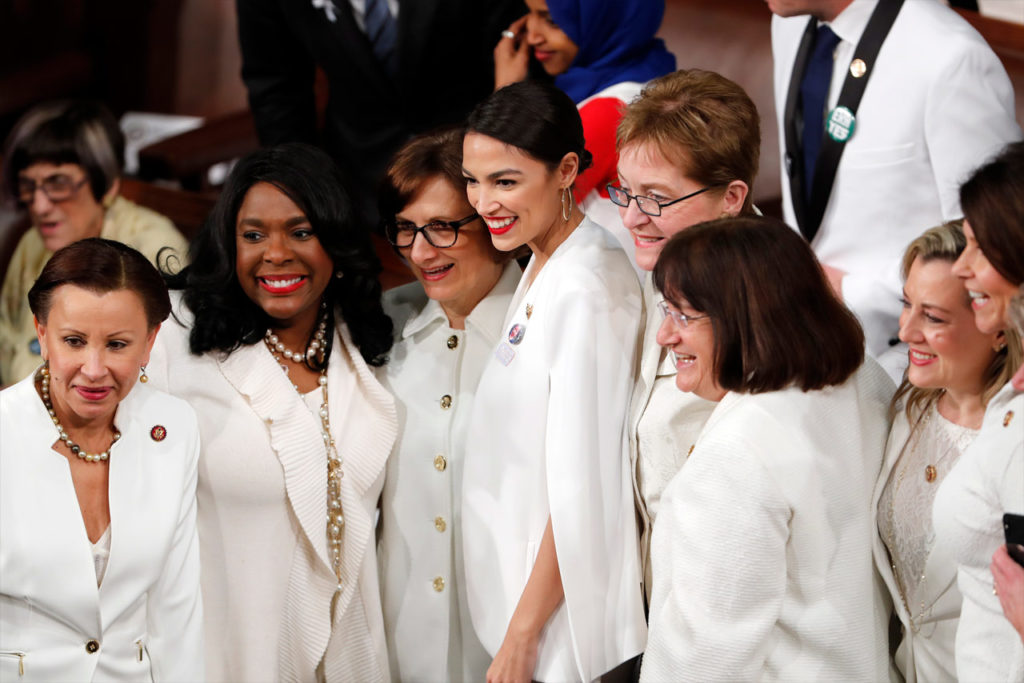 Democratic members of Congress, including Rep. Alexandria Ocasio-Cortez, D-N.Y., center, pose for a photo before President Donald Trump delivers his State of the Union address to a joint session of Congress on Capitol Hill in Washington, Tuesday, Feb. 5, 2019. (AP Photo/J. Scott Applewhite)

Another Democratic star, Stacey Abrams, will deliver the party’s response to Trump. Abrams narrowly lost her bid in November to become America’s first black female governor, and party leaders are aggressively recruiting her to run for U.S. Senate from Georgia.
In excerpts released ahead of Abrams’ remarks, she calls the shutdown a political stunt that “defied every tenet of fairness and abandoned not just our people, but our values.”
Trump’s address amounted to an opening argument for his re-election campaign. Polls show he has work to do, with his approval rating falling to just 34 percent after the shutdown, according to a recent survey conducted by The Associated Press-NORC Center for Public Affairs Research.

Members of Congress took an oath to the Constitution. We have a duty to conduct oversight over the other two branches of government. Democrats in the House, unlike Republicans last term, will not abdicate our duty. We WILL investigate @realDonaldTrump and his associates.#sotu https://t.co/Q1WtsxIVCO

One bright spot for the president has been the economy, which has added jobs for 100 straight months. He said the U.S. has “the hottest economy anywhere in the world.”
He said, “The only thing that can stop it are foolish wars, politics or ridiculous partisan investigations” an apparent swipe at the special counsel investigation into ties between Russia and Trump’s 2016 campaign.
Turning to foreign policy, another area where Republicans have increasingly been willing to distance themselves from the president, Trump defended his decisions to withdraw U.S. troops from Syria and Afghanistan.
“Great nations do not fight endless wars,” he said, adding that the U.S. is working with allies to “destroy the remnants” of the Islamic State group and that he has “accelerated” efforts to reach a settlement in Afghanistan.
IS militants have lost territory since Trump’s surprise announcement in December that he was pulling U.S. forces out, but military officials warn the fighters could regroup within six months to a year after the Americans leave. Several leading GOP lawmakers have sharply criticized his plans to withdraw from Syria, as well as from Afghanistan.
Trump’s guests for the speech include Anna Marie Johnson, a woman whose life sentence for drug offenses was commuted by the president, and Joshua Trump, a sixth-grade student from Wilmington, Delaware, who has been bullied over his last name. They will sit with first lady Melania Trump during the address. 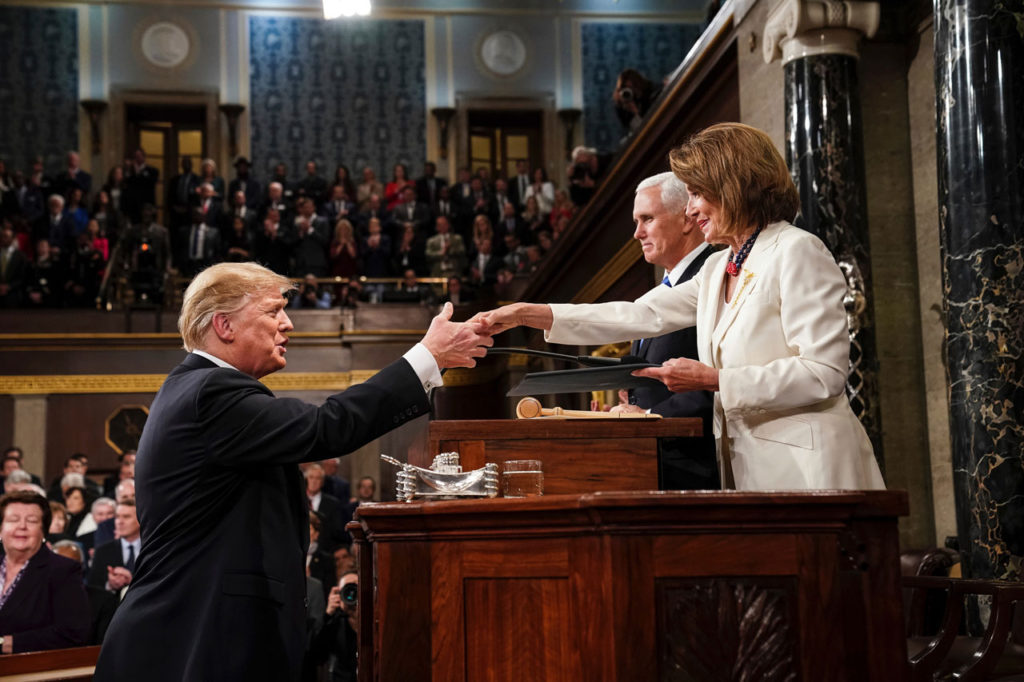 President Donald Trump shakes hands with House Speaker Nancy Pelosi as Vice President Mike Pence looks on, as he arrives in the House chamber before giving his State of the Union address to a joint session of Congress, Tuesday, Feb. 5, 2019 at the Capitol in Washington. (Doug Mills/The New York Times via AP, Pool)