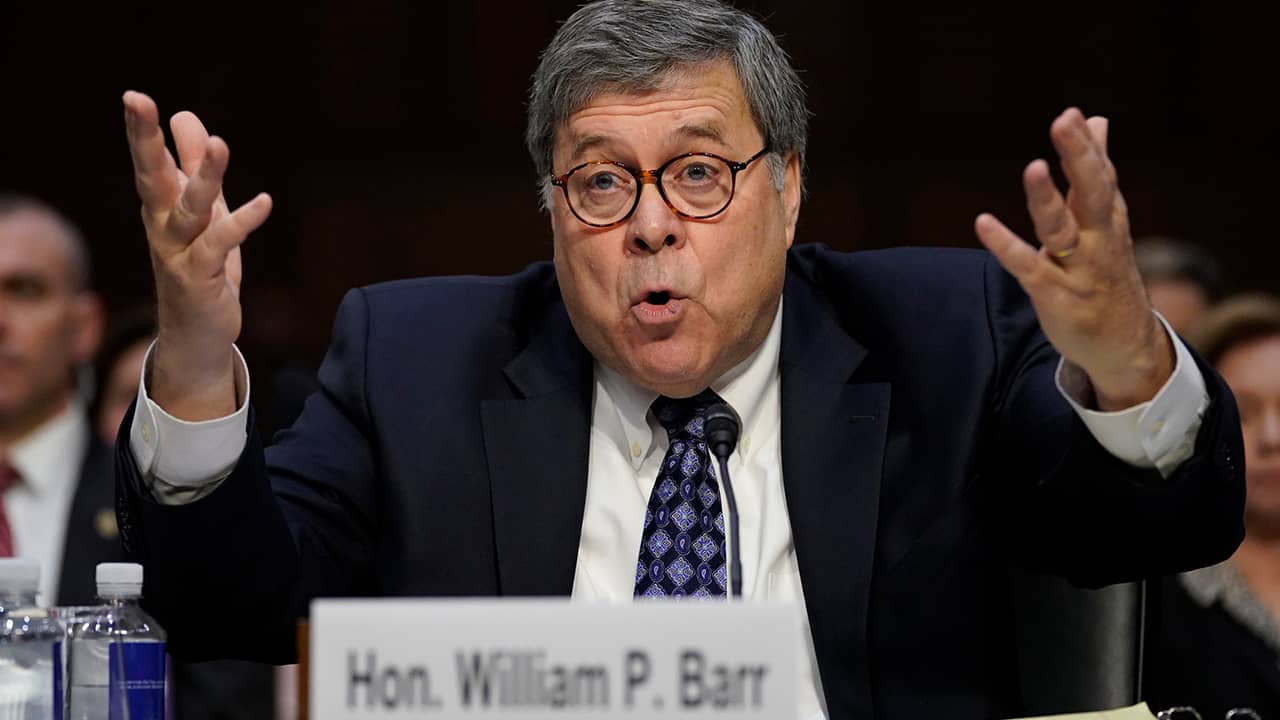 WASHINGTON — Vowing “I will not be bullied,” President Donald Trump’s nominee for attorney general asserted independence from the White House on Tuesday, saying he believed that Russia had tried to interfere in the 2016 presidential election, that the special counsel investigation shadowing Trump is not a witch hunt and that his predecessor was right to recuse himself from the probe.
The comments by William Barr at his Senate confirmation hearing pointedly departed from Trump’s own views and underscored Barr’s efforts to reassure Democrats that he will not be a loyalist to a president who has appeared to demand it from law enforcement. He also repeatedly sought to assuage concerns that he might disturb or upend special counsel Robert Mueller’s investigation as it reaches its final stages.


“I don’t believe Mr. Mueller would be involved in a witch hunt.” — Attorney General nominee William Barr, who has known Robert Mueller for 30 years
Some Democrats are concerned about that very possibility, citing a memo Barr wrote to the Justice Department before his nomination in which he criticized Mueller’s investigation for the way it was presumably looking into whether Trump had obstructed justice.

Barr Says He Frowned on ‘Lock Her Up’

Sen. Dianne Feinstein of California, the top Democrat on the Senate Judiciary Committee, told Barr the memo showed “a determined effort, I thought, to undermine Bob Mueller.” The nominee told senators he was merely trying to advised Justice Department officials against “stretching the statute beyond what was intended” to conclude that the president had obstructed justice.
Though Barr said an attorney general should work in concert with an administration’s policy goals, he broke from some Trump talking points, including the mantra that the Russia probe is a witch hunt, and said he frowned on “Lock Her Up” calls for Hillary Clinton. Trump has equivocated on Russian meddling in the 2016 election and assailed and pushed out his first attorney general, Jeff Sessions, for recusing because of his work with the Trump campaign.
Barr stated without hesitation that it was in the public interest for Mueller to finish his investigation into whether the Trump campaign coordinated with the Kremlin to sway the presidential election. He said he would resist any order by Trump to fire Mueller without cause and called it “unimaginable” that Mueller would do anything to require his termination.
“I believe the Russians interfered or attempted to interfere with the election, and I think we have to get to the bottom of it,” Barr said during the nine-hour hearing.
He said that, at 68 and partially retired, he felt emboldened to “do the right thing and not really care about the consequences.” If a president directs an attorney general to do something illegal, he said, an attorney general must resign.
“I will not be bullied into doing anything that I think is wrong by anybody, whether it be editorial boards or Congress or the president,” Barr told the hearing.
Consumed by the partial government shutdown, Trump remained out of sight at the White House but also kept an eye on the news coverage of the hearing and told aides he was pleased with how Barr was handling himself, said two White House officials who spoke on condition of anonymity because they were not authorized to discuss internal conversations.

On other topics, Barr echoed in part the president’s hardline immigration stance and said the Justice Department would not go after marijuana companies in states where the drug is legal. He also would not rule out jailing reporters for doing their jobs, saying he could envision circumstances where a journalist could be held in contempt “as a last resort.”
Barr’s confirmation is likely, given that Republicans control the Senate. Even some Democrats have been looking to move on from acting Attorney General Matthew Whitaker, who declined to remove himself the Russia probe and has faced scrutiny over his private dealings.
But he nonetheless faced skeptical questions from Democrats over whether he could oversee without bias or interference the remainder of Mueller’s probe.
Feinstein said the nominee’s past rhetoric in support of expansive presidential powers “raises a number of serious questions about your views on executive authority and whether the president is, in fact, above the law.” Under questioning, Barr voiced a more moderate view, saying a president who ordered an attorney general to halt an investigation would clearly be committing an “abuse of power” if not necessarily a crime.

Barr said under questioning from Sen. Chris Coons, a Delaware Democrat, that he wouldn’t interfere with a Mueller request to subpoena Trump for his testimony “if there was a factual basis.” But he also said he saw no reason to change Justice Department legal opinions that have held that a sitting president cannot be indicted.
Barr called Mueller a friend of 30 years and said “it is vitally important” that Mueller be allowed to complete his investigation.
“I don’t believe Mr. Mueller would be involved in a witch hunt,” he said when asked by the panel’s Republican chairman, Sen. Lindsey Graham of South Carolina.