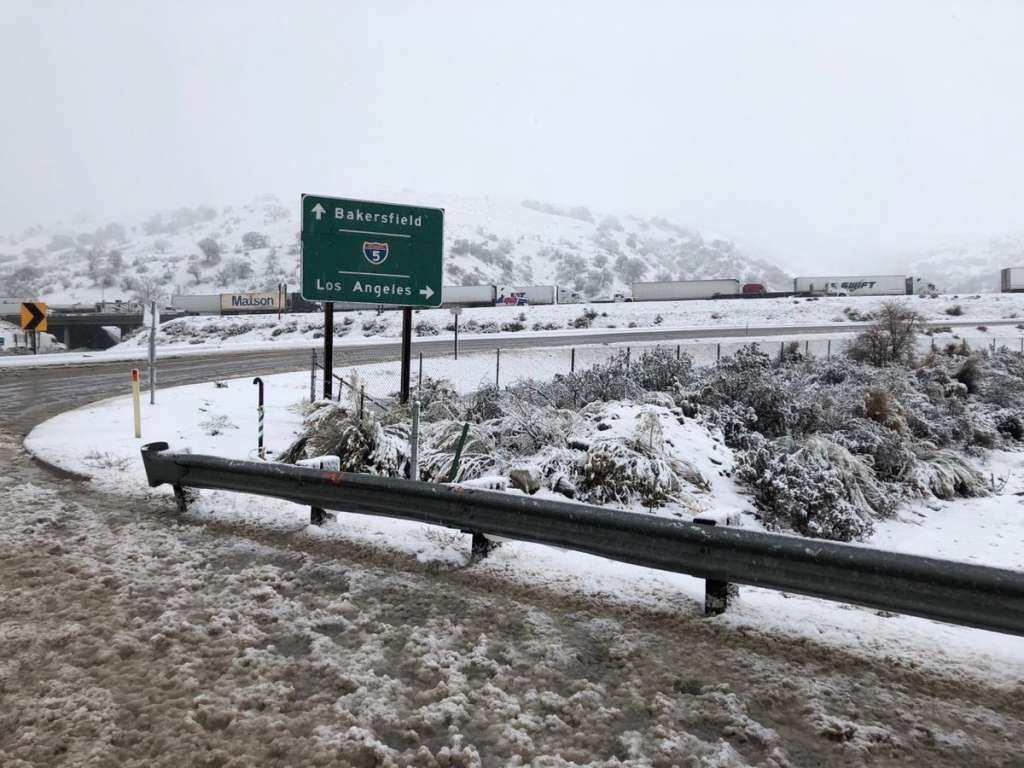 UPDATE, 6:53 P.M.
Caltrans says the southbound lanes of Interstate 5 through the Grapevine are open again after they were closed earlier Monday because of high winds and snow.

GRAPEVINE: Southbound I-5 is now OPEN! CHP is providing pacing, please exercise caution as you make your way onto and over the pass. @CaltransDist7 @CaltransHQ

High winds and snow closed Interstate 5 Monday in both directions on the Grapevine, which connects the San Joaquin Valley and the Bay Area to Los Angeles.
Caltrans says the closure began three miles north of the State Route 126 junction at Parker Road in Los Angeles County and extended 25 miles south of Bakersfield to Laval Road.
After the closure, the California Highway Patrol escorted some motorists through the Grapevine.

We received a picture from @kevincharette of a snow measurement of 10 inches in Frazier Park. A Winter Storm Warning remains in effect for the Kern County mountains for elevations above 4,000 feet until 4 AM PST Tuesday. Thanks to Kevin for passing along the report. #CAwx pic.twitter.com/nUKxt3QpBR

Both the CHP and Caltrans are urging motorists to use alternative routes.
A winter storm warning will be in effect in the San Gabriel Mountains until 10 a.m. Tuesday.

In addition, a Pacific storm moving across Southern California triggered a mudslide that closed a 4.5-mile section of the Pacific Coast Highway just north of Malibu.
There was no estimate on when the Pacific Coast Highway will open.
In Riverside County, a mandatory evacuation was ordered for a dozen areas around the burn scar of the Holy Fire, which erupted last August in Holy Jim Canyon.