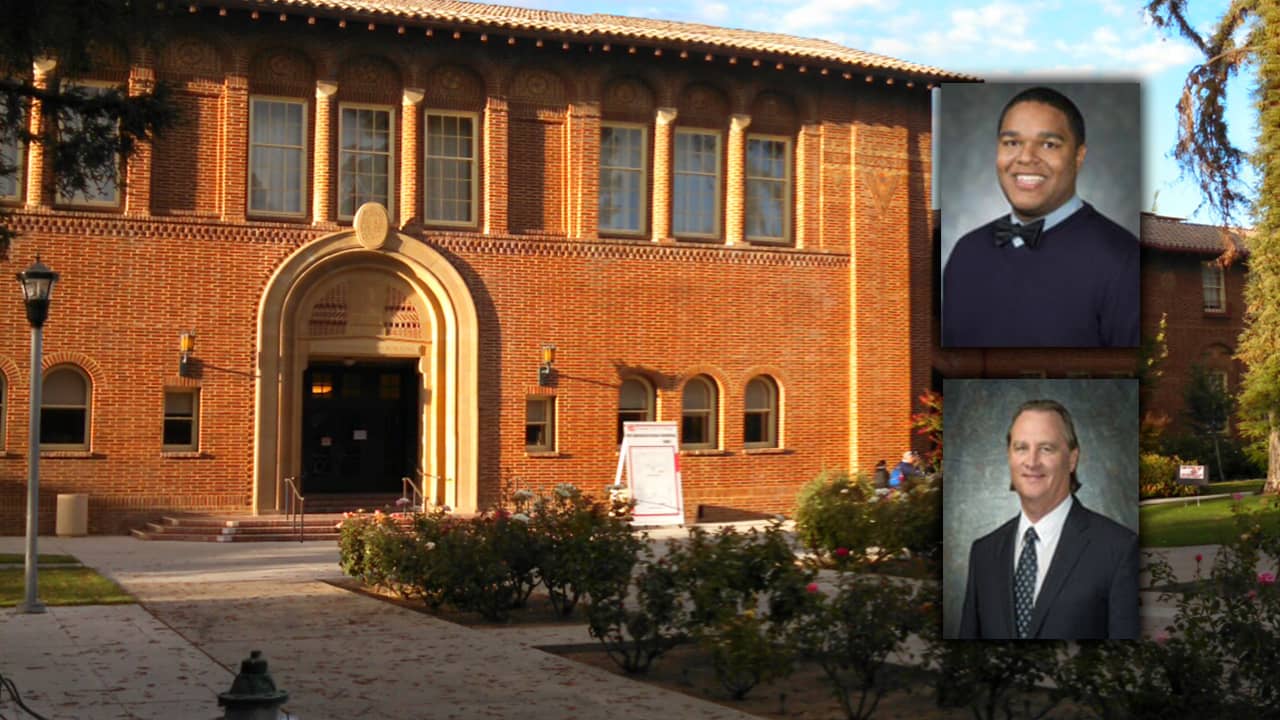 An explosive battle between two State Center trustees over one’s nomination as board vice president led to the district engaging in a fact-finding mission.
At the Dec. 11 board meeting — the first meeting of the new term — Trustee Bobby Kahn objected to colleague Eric Payne’s nomination as board vice president. The two men then traded allegations of misconduct.
Kahn cited several ethics violations by Payne through the years.
Payne called Kahn’s allegations a “lie” and “defamatory” and accused Kahn of an ethical lapse and discriminatory behavior.
Neither trustee is backing down.
“I’ll continue to speak truth to power unapologetically,” Payne said.
Kahn is just as resolute.
“It’s a place of high integrity and I just took exception to the fact that. … I didn’t feel that Trustee Payne warranted a leadership position with all the issues that he’s currently having and then all the issues that he has created over the past two, three years,” Kahn told GV Wire this week.
Things got so out of hand, that at the next meeting on Tuesday (Jan. 8), the board will decide on creating an ad-hoc committee to explore allegations of trustee misconduct, at the urging of new board president Deborah Ikeda and Chancellor Paul Parnell.

The Dec. 11 meeting was mostly ceremonial, with the board voting on leadership positions. The board chose Ikeda as president and newcomer Annalisa Perea as secretary.
But when trustee John Leal nominated Payne for vice president, Kahn objected and, in turn, nominated Richard Caglia for the post.
Kahn and Payne then engaged in a five-minute oratory about the latter’s fitness for leadership.

Listen to Audio of the Debate

“I have reservations about Trustee Payne and some of the items that he has outstanding, such as FPPC regulations. There are 21 confirmed regulations that he is still trying to deal with,” Kahn said, according to the district transcript.
The Fair Political Practices Commission, a state agency that monitors campaign finances, says that the investigation remains open.
Things devolved from there.
Kahn also brought up some of Payne’s other controversies in his six years as a trustee. Among the dirty laundry aired Dec. 11:
— The board disciplined Payne in 2015 for improperly using a handicap placard, and for writing an op-ed for The Fresno Bee that didn’t properly credit portions of which were written by others.
— Misusing a district credit card, including charging his personal PG&E bill to the district. The district eventually cut off all trustee credit card accounts.
At that point, Payne interrupted, saying Kahn’s remarks were “defamatory.”
Ikeda called Payne out of order, and Kahn resumed.
— Kahn noted Payne received a letter of reprimand, after Payne sent a letter on Oct. 23, 2017, saying that former chancellor Bill Stewart was a “white supremacist.”
— Payne’s claims of discrimination at that time led to a costly district investigation, and Kahn said that that money could have benefited students.
In an audio recording of the meeting, Payne could be heard saying, “This is a lie.”
Kahn said that because of Payne’s behavior, he wanted his colleague to take a “year or two to clean up these issues before he could cast a vote in favor of a leadership role.”

Payne fought back during the meeting. He called Kahn’s allegations “character assassination.” Among Payne’s responses:
— Said he was in “mitigation” with the FPPC over the 21 allegations, and that it was an “isolated incident from my point of service.”
— Called out Kahn for his relationship with Parnell’s executive assistant.
“Nobody has called into question, but me, the nature of the relationship you have with Claudette Matz and the household that you both live in together, and it is inappropriate that she is a confidential employee to the chancellor.”
— Payne accused Kahn of discriminatory behavior.
—Payne said, “I requested districtwide training because we have received a number of lawsuits that individual employees have filed feeling targeted in the system and it was to bring awareness to those issues.”
Payne concluded: “Those claims that you are bringing against me are not true.”
Kahn rebutted: “All those claims are true. And you know it.”

Trustee John Leal asked for decorum from the board members. He said Kahn bringing up a vote that Payne took about grant funding was out of bounds. “We can all take potshots at each other” for prior votes, Leal said.
Kahn agreed and retracted that portion of his comments. Ikeda then ended the discussion and called for a vote on the nominations.
The board picked Payne, 4-3.

The district, which oversees five community college campuses, issued a transcript of the Kahn-Payne interaction, side-by-side, with supporting facts. For the most part, it agreed with Kahn.
The report confirmed the FPPC investigations; Payne’s issues with the disability placard, the Fresno Bee op-ed problems, and credit card misuse; and board leadership reprimanding Payne for calling Stewart a “white supremacist.”
But the district’s fact-finding after the Dec. 11 meeting did take issue with Kahn’s stated cost of the discrimination investigation, saying it spent $25,473.67, not $30,000.
In 2017, the district launched that investigation after a June email from Payne to Parnell, Kahn, and Leal. Payne complained of “a number of micro-aggressions from staff, as the only African American Member on the Board I never see anyone that looks quite like me in the District Office.”
Payne insisted he never asked for such an investigation, which outside counsel took five months to conclude. In a 22-page document, investigators did not substantiate Payne’s discrimination allegations.
The district’s current fact-finding report refuted Payne’s allegations that Kahn’s comments at the Dec. 11 meeting were defamatory, noting that “Kahn’s statements appear true.”
The report also disagreed with Payne’s accusation that Kahn engaged in discriminatory behavior.
The district said there is no conflict of interest regarding Kahn’s relationship with Matz, and that he “always recused himself on any board item which might have the appearance of conflict of interest. The opinions have been shared with the full board.”
The district’s report succinctly summed up: “In reviewing the claims of Trustee Kahn, they appear accurate.”

In an Oct. 2017 email to Matz (and also Parnell), Payne wrote he would not attend a ceremony in Madera for Bill Stewart, the district’s former chancellor, because “I will not support the celebration of a building being named after a White Supremacist. I will not attend.”
Asked to explain by GV Wire, Payne said “Anytime you talk about racial reconciliation within the system, these are very challenging and hard conversations to have. A white supremacist is ultimately a political ideology that someone might have.”
Payne said that many African-Americans in leadership left under Stewart’s term. He also said that Stewart used a demeaning tone, comparing the atmosphere to the current White House.
In response, Kahn and Leal sent a letter to Payne saying his accusations were “malicious, untrue, and intended to unjustly harm his reputation.”
The letter also said Payne’s email was “beneath the dignity of the office” and called for a retraction.
GV Wire attempted to reach Stewart for comment through a State Center representative but was unsuccessful.

The board will vote whether to take the two-way allegations of misconduct to the next level at Tuesday’s meeting. If the motion is approved, the board would form a three-member committee to further investigate “the validity of the complaint.”
The agenda states that the board must consider the matter in open session.
Kahn says he is likely to vote in favor of forming the committee.
“I feel that it’s in the best interest of the board to fully investigate all the allegations. I’m very comfortable and confident in how I’ve conducted myself as a trustee, how I’ve conducted myself as an individual representing the district,” Kahn said.
Payne sees no need for the committee.
“The trustee doesn’t like me, and that’s OK. I’m not here to be liked. I am here to represent the people of Trustee Area Two, to fight for the needs of Trustee Area Two, and all students in our system,” Payne said.
GV Wire spoke with one other trustee, Perea, who said she would not support a committee looking into the incident.

Battle to Curb 'Epidemic' Teen E-Cigarette Use Ramps Up