Battle to Curb 'Epidemic' Teen E-Cigarette Use Ramps Up 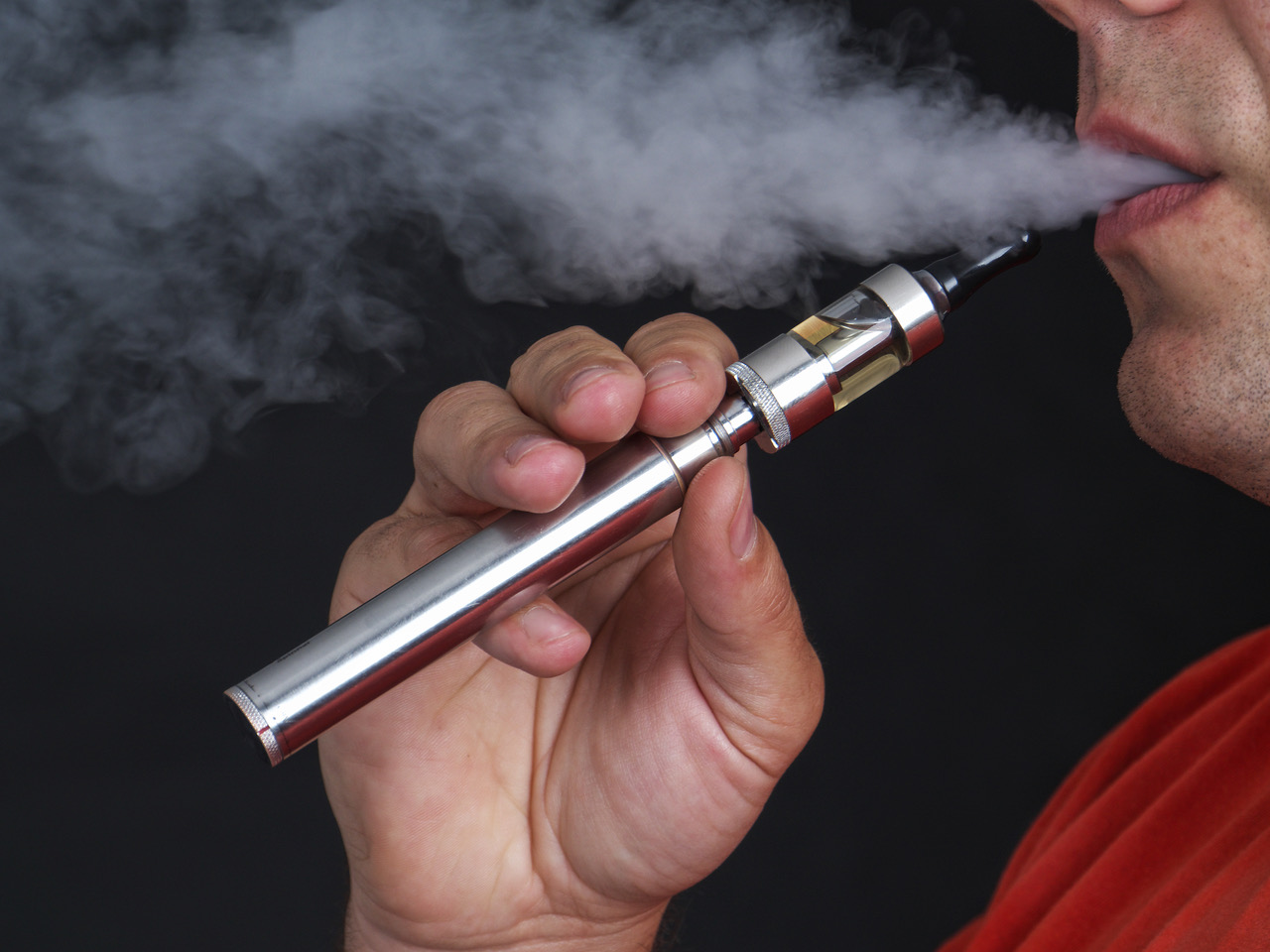 Vaping is touted by its makers as a safer alternative to cigarettes and a way for Americans to quit the nicotine habit — a claim disputed by health experts.
Damon Paraguas, however, says it has helped him.
Ever since his early teen years, Paraguas, who is now 25, was smoking two-and-a-half packs a day. He credits vaping for helping him to stay off of cigarettes for four years.
“It is a good alternative to quit smoking actual cigarettes,” said Paraguas, who works at Century Vape in northeast Fresno. “I don’t even go and buy a pack anymore, but I vape constantly.”
Matthew McManus, who is now in his mid-20s, has been smoking since he was 16. He said he’s been using vaping as a way to wean himself off of smoking, and so far it’s working.
“It was hard to get off, but I have been off of cigarettes for about a year now,” McManus said.

Despite the benefits touted by some users, new research suggests that e-cigs may not be a healthy alternative to traditional cigarettes.
In her article “What is Vaping?” Dr. Linda Richter writes that the aerosol in e-cigarettes consists of fine particles, many of which contain varying amounts of toxic chemicals. Such chemicals, she said, have been linked to cancer, as well as respiratory and heart disease.
Vaping can also cause problems in the lungs and affect the pre-frontal cortex of the brain, said Wendee Winter, a nurse practitioner with the Sierra Vista Children’s Health Center in Clovis.
That brain region has been implicated in planning complex cognitive behavior, personality expression, decision making, and moderating social behavior.
“It might seem like it is really innocent, but it is not innocent at all, and can have lasting effects your whole life,” Winter said.
Perhaps a bigger problem is that since e-cigarettes entered the U.S. marketplace in 2007, they have become the most commonly used tobacco product among U.S. teens., many of whom never previously smoked.
Flavored e-cigs are especially popular among teens.
According to the U.S. Food and Drug Administration, use of any flavored e-cigarette went up among current users from 60.9 percent to 67.8 percent, and menthol use increased from 42.3 percent to 51.2 percent among all current e-cig users — including those using multiple products — and from 21.4 percent to 38.1 percent among exclusive e-cig users.

California Crackdown on Teen Tobacco Use

In an attempt to curb teen use, California, in 2016, updated the definition of tobacco products to include electronic smoking devices and any other tobacco product that may appear on the market in the future, Kwofie said.
Six states, including California, have raised the tobacco age to 21.
Kwofie said Fresno County’s Tobacco Prevention Program is working with local cities in Fresno County to also update local tobacco-related laws to include and prohibit the use of electronic smoking devices.
Kwofie said the city of Firebaugh is considering updating its smoke-free parks and events laws to prohibit vaping devices.
There are also two state Senate bills — SB 38 and 39 — that propose to ban the sale of flavored tobacco and e-cigarette products in California. The bills also require e-cigarette vendors to transport their products in “conspicuously marked” receptacles and only with the signature of a person 21 or older.
The Assembly is home to a bill,  AB 131, that would prohibit e-cigarette manufacturers from advertising or promoting products that appeal to children.
The bills aim to regulate the industry, which is projected to record $43 billion in annual sales by 2023, according to Research and Markets.


Should E-Cigs Be Free From Tobacco Regulations?

Applying tobacco laws to e-cigarettes, Paraguas said, is “ridiculous.”
“It should be its own separate thing because it’s not a tobacco product,”  Paraguas said.
Just because some e-cigarettes contain nicotine is not enough to group them with traditional cigarettes, he said.
McManus believes otherwise. 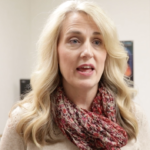 “It might seem like it is really innocent, but it is not innocent at all, and can have lasting effects your whole life.” — Wendee Winter, nurse practitioner with the Sierra Vista Children’s Health Center
“I think (e-cigarettes) should have the same laws because I wouldn’t want anybody smoking around my kids in a restaurant or something when I am eating,” McManus said.
Although Paraguas agrees with the 21 age limit, he thinks it is useless because “if they really want it, they will get their hands on it somehow.”
Nevertheless, Paraguas said that he is “super strict” about following the law, carding “every single person that comes in.”
McManus said the state should have left the legal age at 18.

Months after the Food and Drug Administration announced that Juul and four other e-cigarette manufacturers had 60 days to address use by minors or they could have their products taken off the market, Juul accepted a $12.8 billion cash investment from Altria, the maker of top-selling cigarette Marlboro.
The deal, which gives Altria a 35 percent stake that values the 3-year-old startup at $38 billion, will give Juul regulatory expertise to help it manage to survive in a world where many are hoping for its demise. 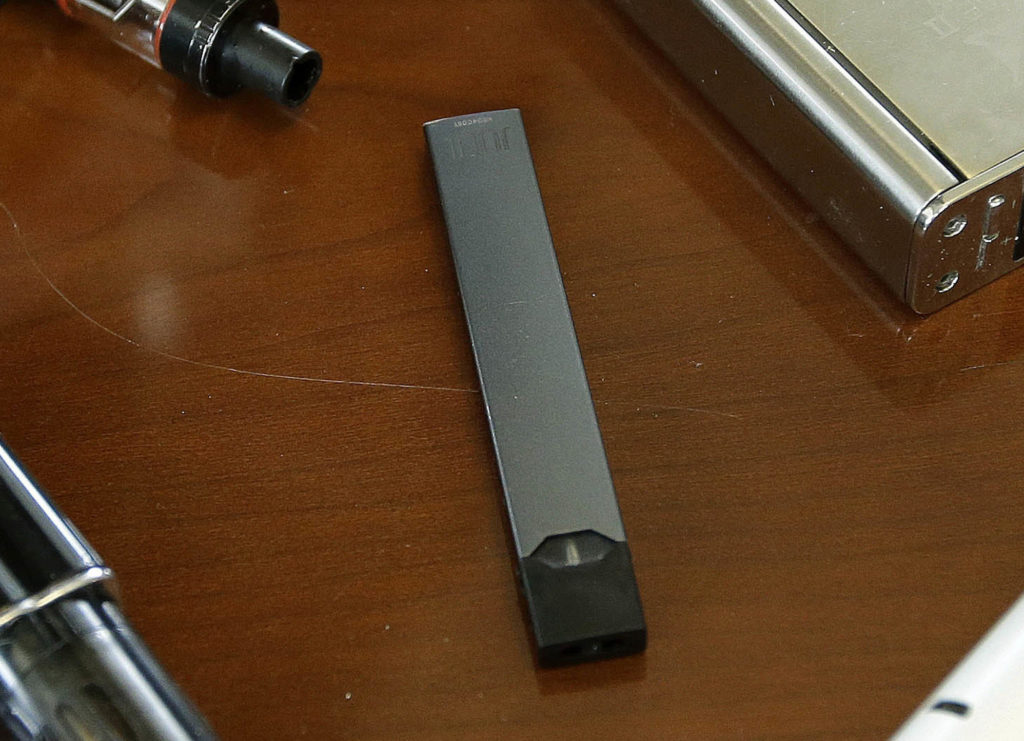 This April 10, 2018, photo shows a Juul in Marshfield, Mass. Altria is spending $12.8 billion for a stake in e-vapor company JUUL as one of the world’s biggest tobacco companies tries to offset declining cigarette use. (AP Photo/Steven Senne, File)

Trump: Shutdown Could Last 'Months or Even Years'