Tony Thurmond Is the New Schools Chief. Now What? 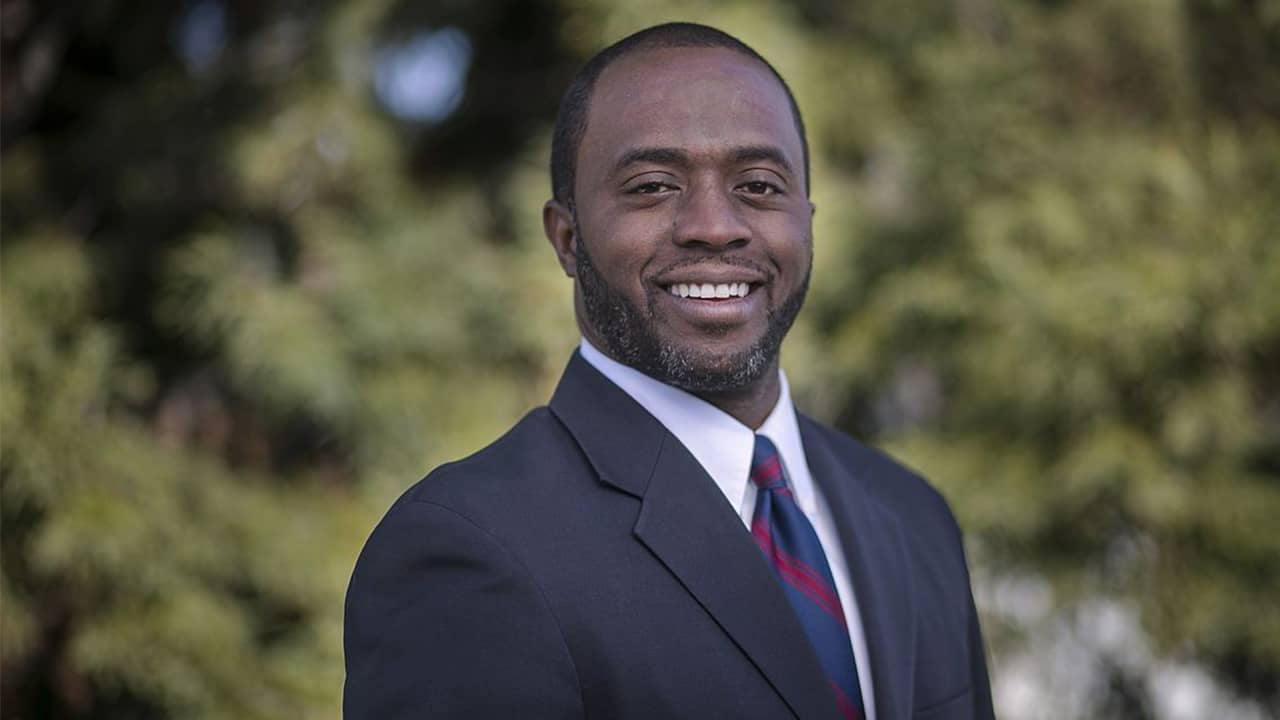 With bucks and boots on the ground from California teachers’ unions, Bay Area Democratic Assemblyman Tony Thurmond declared victory Saturday as California’s new superintendent of public instruction, an outcome that essentially endorses the labor-backed education establishment in the state. Thurmond, who had lagged in early returns, had a margin of nearly 2 points when he tweeted, 11 days into California’s notoriously slow-motion vote count, that Marshall Tuck, a fellow Democrat and former Los Angeles executive of charter schools and educational nonprofits, had called to concede the race to him.

“I want to thank the voters of California for electing me to serve the 6 million students of California,” said Thurmond, who overrode Tuck’s broader-based appeal with decisive margins in the state’s coastal and urban counties.

Tuck had not yet spoken publicly as of Saturday evening, but The Los Angeles Times reported that he addressed his apparent defeat in a letter to supporters.

“As you can imagine,” Tuck reportedly wrote, “the disappointment has crept in there in a pretty big way more recently as it was becoming clear to me that I wasn’t going to get a job that I wanted and that I thought I would be really good at.”

The apparent victory — some 2 million ballots still remain to be counted— marked a high-profile setback for wealthy supporters of education reform in California’s sprawling system of public schools. The defeat was Tuck’s second competitive loss in a row to a candidate endorsed by the powerful California Teachers Association. In 2014, he lost the school chief post to Tom Torlakson, who, like Thurmond,  was backed by the teachers’ unions.

For pro-charter donors, the outcome was the dispiriting second half of a 2018 double-header: In addition to the tens of millions they injected into the school chief race, which generated an estimated $60 million in combined campaign spending, the wealthy school reform cadre also threw $25 million during the primary into an unsuccessful attempt to get Los Angeles mayor Antonio Villargoisa elected governor.

Villaraigosa, who this month joined the Washington lobbying firm Mercury, where he plans to work in strategic communications, ended up losing to Republican John Cox and the ultimate winner, Gov.-elect Gavin Newsom, who also was supported by labor.

Eric Heins, president of the California Teachers Association, said Saturday that Thurmond’s win “sent a loud message to the billionaires and corporate special interests who spent nearly $40 million trying to buy the state superintendent’s office: Our public schools are not for sale!”

Tuck actually was ahead of Thurmond by more than 10 percentage points on election night, but his lead dwindled as counties began to tally the millions of ballots submitted late or by mail, a cohort that typically skews left.

By Monday — six days after the first wave of results — Thurmond had gained his first lead of the race, which was virtually in a 50-50 dead heat, by 3,503 votes. He never trailed again.

Practically speaking, the transition from Torlakson to Thurmond is unlikely to create much immediate impact in California’s K-12 school system. The superintendent of public instruction is mostly a bully pulpit in this state, with a largely administrative function and little rulemaking authority.

While charter school advocates had hoped Tuck could be a high-profile pitchman for their argument that charter schools might be better positioned to lift low-income students, the lion’s share of education policy in California is decided by the governor, Legislature and State Board of Education. The state superintendent oversees the state Department of Education that’s responsible for enforcing policies.

Thurmond also supports Gov. Jerry Brown’s recent overhaul of the state’s education policies, which Torlakson backed and Gov.-elect Gavin Newsom has pledged to build on. His one suggestion on the state funding formula, which pumps extra money into schools with more disadvantaged students, has been to make state spending more transparent.

During the campaign, Thurmond stopped short of saying he would continue Torlakson’s controversial policy of allowing schools to use the Local Control Funding Formula to give across-the-board pay raises to teachers, but neither did he say he would rescind Torlakson’s guidance, as Tuck did.

“We talked to voters across the state and told them what this election means for each of us: it means giving every kid the opportunity to succeed in the 21st century, not just the ones that show the most potential.” — Tony Thurmond

Thurmond argued instead that the key to raising achievement in the state with the largest concentration of students in poverty is simply to invest more overall in the existing public education system. His experience as a legislator, he said, would help with that.

Thurmond said he will use the office to advance an ambitious eight-year plan to significantly boost the state’s spending on public schools and raise California from the bottom tier to the top of state education spending rankings. Such a distinction would require tens of billions of dollars in new state funding. In an interview with CALmatters, he also said he would not be beholden to any particular special interest.

“We talked to voters across the state and told them what this election means for each of us: it means giving every kid the opportunity to succeed in the 21st century, not just the ones that show the most potential,” Thurmond said.

“It means funding our public schools at the level they deserve, not pouring money into our jails in prisons. It means providing mental health treatment for kids, not arming them with guns.”

In interviews and on the campaign trial, Thurmond said his reasons for running for state superintendent were personal. Thurmond spent most of his childhood without either of his parents. Raised by his grandmother on food stamps and other government assistance, he pointed to public education as being the “great equalizer” that led him out of poverty.

A former social worker and school board member, Thurmond said he plans to be a vocal advocate for the state’s most disadvantaged students. Throughout his campaign, he sought to establish himself as the “traditional” Democrat in the race.

In TV commercials, he said he’d push back on school privatization moves by President Trump and his education secretary, Betsy DeVos, who, unlike California school reformers, have sought to open the door to for-profit charter schools.

Thurmond also argued that his relationships and expertise at the Legislature would make him a powerful lobbyist for his agenda, which includes bolstering bilingual education and mental care services for students. He points to nearly two dozen education-related bills he introduced in the Assembly as examples.

It remains unclear whether Thurmond can bridge the divide between charter supporters and teachers unions, who for years now have waged a polarizing and bitter battle over the direction of the state’s public-school system. The race grabbed national attention in part because of similarly intense debates over charter schools and reform efforts in other states.

And the philosophical fight over charter schools is an intense one with competing “goods,” pitting the egalitarian ideals of organized labor and public education against pragmatic efforts, mostly in cities, to raise the quality of chronically low-performing public schools.

The state superintendent race drew more than $61 million in campaign spending, according to California Target Book estimates. It also included several attack ads from both sides that were either misleading or untruthful, according to Politifact.

One ad from Thurmond supporters incorrectly implied that U.S. Secretary of Education Betsy DeVos, a Republican, supported Tuck’s campaign. A separate TV attack ad and campaign mailer by EdVoice, an advocacy group that supports charter schools and Tuck’s campaign, falsely claimed that Thurmond was sued by the ACLU while serving as a school board member. That drew a sharp response from the ACLU, which took offense to the mailers because it contained the nonprofit’s acronyms in large letters and did not prominently display who was behind the ad.

Both Tuck and Thurmond downplayed the notion that their race was a proxy for the charter school debate.  Both insisted  voters cared more about issues such as education funding and whether teachers should be paid more money to work in tough schools.

Thurmond and Tuck Were More Alike Than Different

And by most measures, Thurmond and Tuck, both Democrats, were more alike than different. Both supported Brown’s education policy overhaul and higher state funding. Both promised to prioritize the needs of the state’s most disadvantaged students. Both support efforts to boost early childhood education offerings. And politically, both vowed to be vocal and visible.

And by most measures, Thurmond and Tuck, both Democrats, were more alike than different.

But the charter issue, over which the state superintendent has little direct authority, nonetheless was the one that excited their backers. Tuck said he supported nonprofit charter schools though also favored more transparency measures, such as closing down failing charters faster. He also used his experience as CEO of the Green Dot charter network as an example of a model that helped improve sagging student achievement.

Thurmond had said he favored a “pause” on the growth of charters in California while the state examines the long-term impact they’ve had so far on its public education system. The assemblyman also said he supported more charter-school oversight and sympathized with school districts that had taken financial hits after losing students to charter schools.

Andrew Janz on Nunes, Politics and His Future