Hundreds Missing in Fire's Wake Ahead of Trump Visit 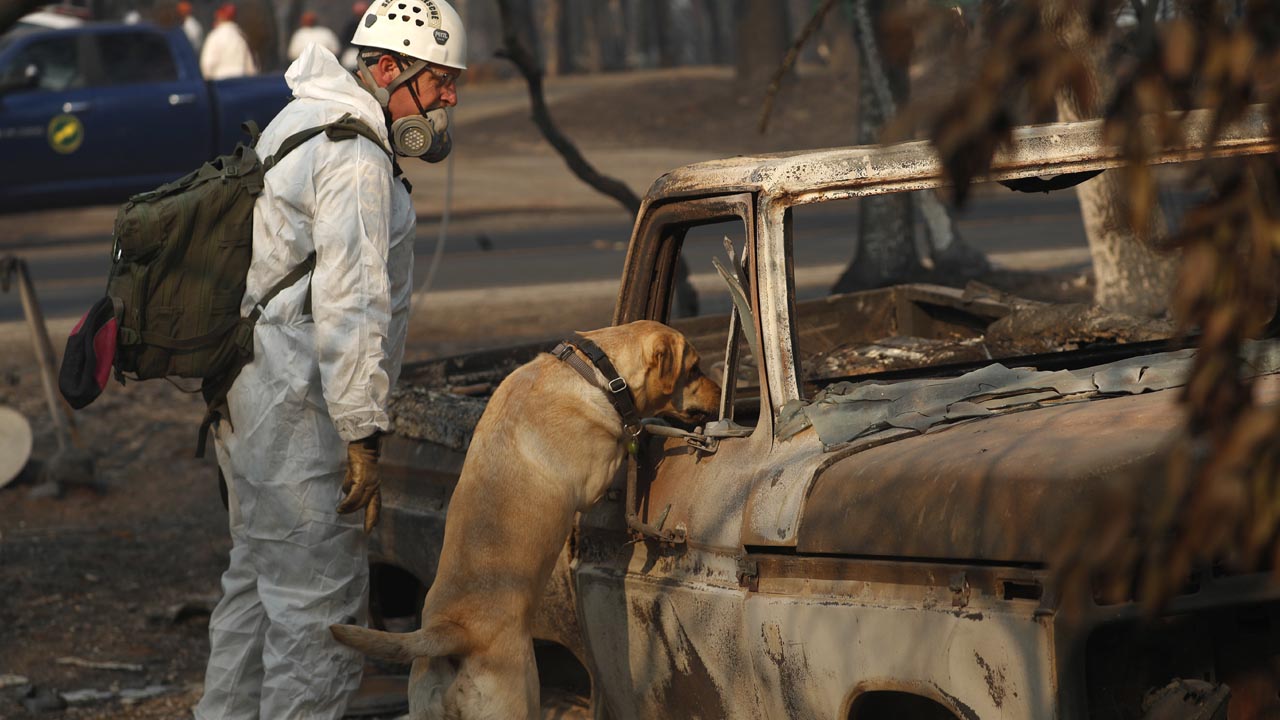 CHICO — With the confirmed death toll at 63, authorities in Northern California on Friday continued to search for those who perished and those who survived the fiercest of wildfires ahead of a planned visit by President Donald Trump.

The president on Saturday is expected to get a look at the grief and damage caused by the deadliest U.S. wildfire in a century, and he could face resentment from locals for blaming the inferno on poor forest management in California.

In an interview taped Friday and scheduled for broadcast on “Fox News Sunday,” Trump said he was surprised to see images of firefighters removing dried brush near a fire, adding, “This should have been all raked out.”

As the search for bodies continued, Butte County spokeswoman Miranda Bowersox said the “unaccounted for” list of more than 600 names released by the sheriff’s office late Thursday was an effort to put names out there so people can call in to say they are OK.

“If you insult people, then you go visit them, how do you think you’re going to be accepted? You’re not going to have a parade.” — Survivor Maggie Crowder of Magalia

The roster probably includes some who fled the blaze and do not realize they’ve been reported missing, Sheriff Kory Honea said.

Some on the list have been confirmed as dead by family and friends on social media. Others have been located and are safe, but authorities haven’t gotten around to marking them as found.

Tamara Conry said she should never have been on the list.

“My husband and I are not missing and never were!” Conry wrote Thursday night on Facebook. “We have no family looking for us. … I called and left a message to take our names off.”

Authorities compiled the list by going back to listen to all the dispatch calls they received since the fire started, to make sure they didn’t miss anyone.

In last year’s catastrophic wildfires in California wine country, Sonoma County authorities at one point listed more than 2,000 people as missing. But they slowly whittled down the number. In the end, 44 people died in several counties. 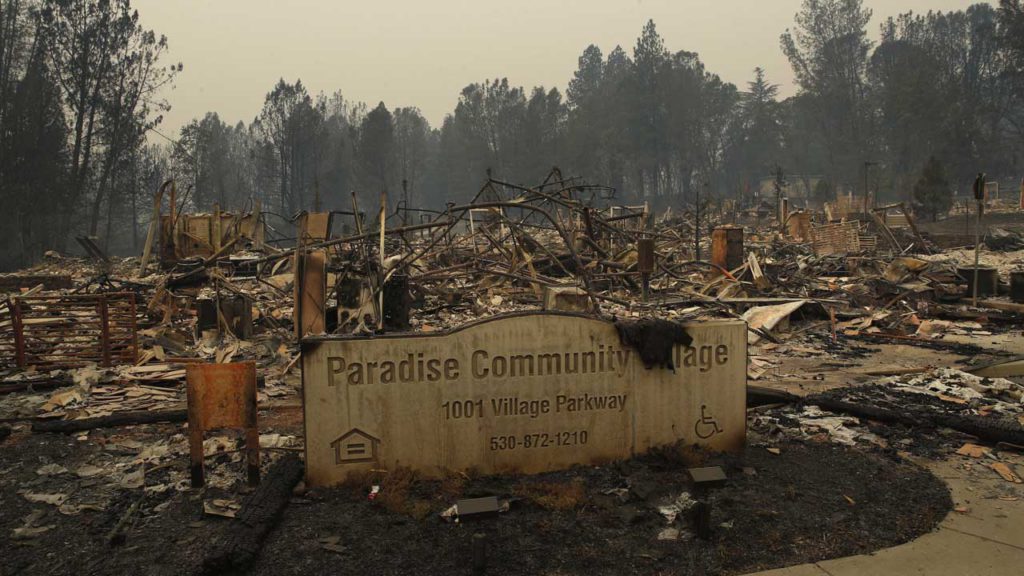 In this Tuesday, Nov. 13, 2018 photo a sign stands at a community destroyed by the Camp Fire in Paradise. Most homes are gone, as are hundreds of shops and other buildings. The supermarket, the hardware store, Dolly-O-Donuts & Gifts where locals started their day with a blueberry fritter and a quick bit of gossip, all gone. The town quite literally went up in smoke and flames in the deadliest, most destructive wildfire in California history. (AP File Photo/John Locher)

The wildfire this time all but razed the town of Paradise, population 27,000, and heavily damaged the outlying communities of Magalia and Concow on Nov. 8, destroying 9,700 houses and 144 apartment buildings, authorities said.

Firefighters continued to gain ground against the blaze, which blackened 222 square miles. It was 45 percent contained and posed no immediate threat to populated areas. Crews managed to stop it from spreading toward Oroville, population 19,000.

This patch of California, a former Gold Rush region in the Sierra Nevada foothills, is to some extent Trump country, with Trump beating Hillary Clinton in Butte County by 4 percentage points in 2016.

But some survivors resent that Trump took to Twitter two days after the disaster to blame the wildfires on poor forest mismanagement. He threatened to withhold federal payments from California.

“If you insult people, then you go visit them, how do you think you’re going to be accepted? You’re not going to have a parade,” Maggie Crowder of Magalia said Thursday outside an informal shelter at a Walmart parking lot in Chico.

But Stacy Lazzarino, who voted for Trump, said it would be good for the president to see the devastation up close: “I think by maybe seeing it he’s going to be like ‘Oh my goodness,’ and it might start opening people’s eyes.”

In his Fox News interview on the eve of his visit, the president repeated his criticism. Asked if he thought climate change contributed to the fires, he said: “Maybe it contributes a little bit. The big problem we have is management.”

Nick Shawkey, a captain with the state fire agency, said the president’s tweet blaming poor forest management was based on a “misunderstanding.” The federal government manages 46 percent of land in California.

“The thing he’s tweeting about is his property,” Shawkey said.

California’s outgoing and incoming governors said they would join Trump on Saturday.

Democrats Gov. Jerry Brown and Gov.-elect Gavin Newsom said they welcomed the president’s visit and “now is a time to pull together for the people of California.” Brown and Newsom have been vocal critics of Trump.

There were also worries the presidential visit would be disruptive.

“It’s already a zoo here and I don’t care who the president is. He needs to wait because the traffic’s already horrendous,” said Charlotte Harkness, whose home in Paradise burned down. “He could just tweet something nice — three words: ‘I am sorry,’ and that’s fine.”

More than 450 searchers continued looking for human remains in the ashes.

Around 52,000 people have been driven out and have gone to shelters, motels and the homes of friends and relatives. With winter coming on, many are seeking answers on what assistance will be provided.

Pelosi Sees Vocal Opposition to her Return as House Speaker

Is Janz In or Out of Fresno County Supervisor Race?