Could too many regulations for the burgeoning cannabis industry deter entry into the market?

That’s the question the state agency in charge of regulating cannabis grapples with.

“We’re not pleasing anybody with our regs, whether it’s the industry, the city or the police chiefs, not everybody is happy,” Lori Ajax, the director of the Bureau of Cannabis Control told a Maddy Institute luncheon audience. “Maybe that’s the balance we need to strike.”

Ajax informed the small gathering, which included outgoing Fresno city councilmen Oliver Baines and Clint Olivier and an inquisitive congressman Jim Costa (D-Fresno), about the challenge of creating rules for an industry from scratch.

“I’m riding by the seat of our pants,” Ajax said. Her agency has 170 pages of regulations ready to go. One of the thorniest issues is regulating cannabis delivery services and determining whether they can deliver in cities that have banned retail sales.

At least three different state agencies regulate the cannabis industry, depending on the sector— DCC controls retail; the Dept. of Food and Agriculture handles cultivation; and the Dept. of Public Health regulates edibles.

Fresno is looking to get in on the cannabis game. On Tuesday (Nov. 6), city voters passed Measure A, which will allow City Hall to set a tax rate of up to 10% for a cannabis business license. Olivier asked Ajax for her thoughts on what the right rate would be. 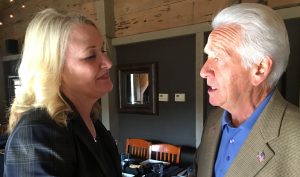 “We do have to look at what they’re paying and if we are pricing people out of the market,” Ajax said. She mentioned that a state license costs $500 to $120,000 annually, plus other taxes and also requires strict product testing. On top of that, cannabis prices are going down.

“Regulation costs businesses, it does,” Ajax said. “We all have to be mindful of that, even the state, in how we set our licensing fees.”

And, because the federal government does not permit cannabis, banking is a challenge. Ajax said her bureau’s new offices in Sacramento are equipped with vaults and bullet-proof glass to handle large cash payments from cannabis operators paying their business licenses fees.

Strange but true: Ajax stayed at a downtown hotel. Her room number: 420.

Does Measure P Still Have a Chance? 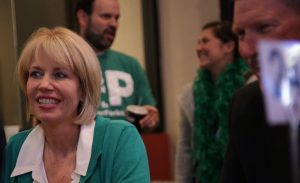 Just like Lloyd Christmas said, “so, you’re telling me there’s a chance?” Some Measure P backers are optimistic there is still a path to passage.

The latest update from the Fresno County election clerk’s office shows Yes on P behind No on P by 829 votes. Despite being upside down, that’s an improvement. After election night Yes on P was 1,579 votes behind. That would seem to be a moot point because Measure P needed two-thirds to pass.

As GV Wire reported back in August, the state courts left some ambiguity as to whether such tax measures need two-thirds to pass, or a simple majority (50% plus one).

As prescribed by Prop 218, taxes that dedicate funds for a specific purpose, like Measure P did with parks, need two-thirds. Tax measures that go into the general fund just need a majority.

But, a 2017 California Supreme Court ruling said that tax measures initiated by the people aren’t subject to the two-thirds requirement. Taxes approved for the ballot by a local government still need the more stringent standard.

San Francisco attempted to implement the court’s ruling for tax measures enacted by its residents in June and again on Nov. 6. The Howard Jarvis Taxpayers Association sued over the June measure and the case is working its way through the courts.

While the City by the Bay plans to collect the tax money, it will hold it in reserve in case the courts agree with HJTA.

Danielle Bergstrom, who worked on the Yes on P campaign at one point, wrote about this issue on Twitter this week, “there’s still a possibility of crossing majority threshold & entering legal limbo.”

Important thread for Measure P in Fresno. Given that there are still roughly 100k ballots left to count in Fresno County (don’t have specifics on City, would assume roughly half are City ballots), there’s still a possibility of crossing majority threshold & entering legal limbo. https://t.co/AuJlSMjTVO 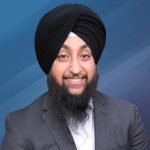 Clerk Brandi Orth says she has about 77,000 ballots left to process. The next update is Wednesday (Nov. 14).

The city of Clovis has a plan to fill vacant buildings along the Shaw Avenue corridor between Highway 168 and Temperance — waive business permit fees.

The city council will vote on the concept at its Tuesday (Nov. 13) meeting. The plan calls for a waiver of the business license tax certificate fee, which can be as much as $7,650 for the first year of either new or expanding businesses in the area.

City staff estimates that with the impending closures of Orchard Supply and Kmart, vacancies will reach 8%. Funding comes from $50,000 in the budget dedicated for economic development. The program will end when the money is gone.

The Clovis council will also decide on restrictions of commercial vehicle parking. The city received complaints from businesses that overnight parking is inhibiting its development.

The city’s plan calls for limiting commercial parking anywhere in the city to just four hours in a 24 hour period. Parking overnight in residential areas is still prohibited.

The Fresno City Council unanimously approved hiring eight new dispatchers for the police department, with the goal of answering 9-1-1 calls more efficiently. The funding will come in part from proceeds of the recent $1.9 million sale of a parking lot on H & Mono streets to the Fresno Grizzlies.

— The council voted 5-2 to approve a memorandum of understanding on a labor contract with the bus drivers’ union. Councilman Garry Bredefeld objected over an incentive plan that would give bus drivers extra compensation for just showing up to work. He called it a very wasteful program.

Other city employee unions have such programs already, and say it helps prevent sick leave abuse.

While other council members expressed concern, it was not enough to sink the contract.

Steve Brandau cast the other no vote, saying while some bus drivers deserve raises, not all of them should.

— The council again pushed back a decision on awarding Pepsi a pouring rights contract at the convention center. Pepsi offered a better deal to the city than soda-rival Coke. But, Bredefeld wants more data on how this deal stacks up with arrangements around the state.

— The council also delayed a vote on adjusting the master fee schedule. They had so many questions about various fee hikes (and in some cases fee lowering), they wanted more time for research.