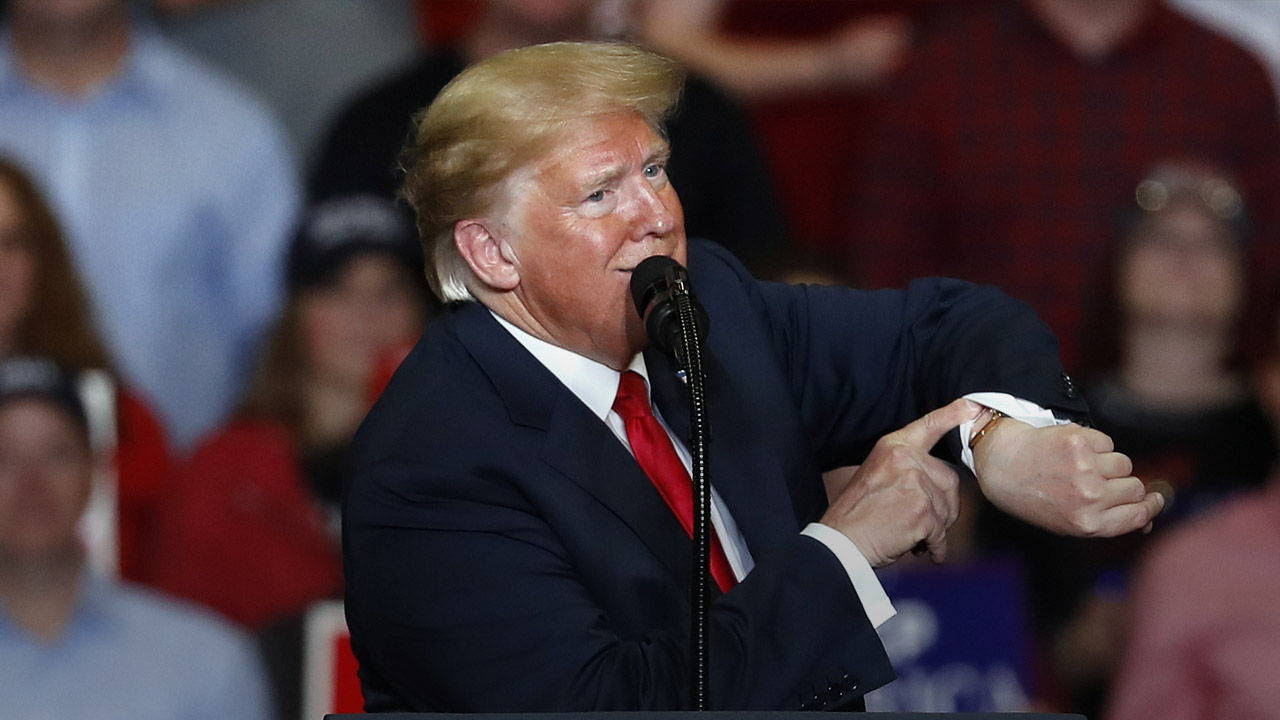 The president spent Election Day calling allies, tweeting endorsements and following news coverage, after concluding a six-day rally blitz in Missouri late Monday. Trump packed his closing argument with hardline immigration rhetoric and harsh attacks on Democrats as he stared down the prospect of Republican losses that could shadow his presidency.

“Everything we have achieved is at stake,” he said. “Because they can take it apart just as fast as we built it.”

Faced with the possibility of keeping the Senate but losing the House, aides have begun laying out the political reality to Trump, who could face an onslaught of Democratic-run investigations and paralysis of his policy agenda. In turn, Trump has already been trying out defensive arguments, noting that midterm losses are typical for the party in the White House, pointing out a high number of GOP retirements and stressing that he had kept his focus on the Senate.

Referendum on Trump’s Appeals to His Base

The election also likely served as a referendum on Trump’s racially charged appeals and the strength of the coalition that powered him to the White House — a group he will need again in just two years.

The president and first lady Melania Trump were watching results come in Tuesday night with friends and family in the White House residence.

Trump’s scorched-earth campaigning came to define the 2018 campaign. In the final days, he sought to motivate supporters with the battle over the confirmation of Supreme Court Justice Brett Kavanaugh — at one point mocking a woman who claimed the judge had sexually assaulted her when they were in high school. Returning to his immigration-heavy 2016 playbook, Trump went on to unleash his full fury on a caravan of migrants slowly making their way to the southern border.

His take-no-prisoners approach troubled many Republicans seeking to appeal to moderate voters in suburban House districts, but Trump prioritized base voters in the deep red states that could determine the fate of the Senate. At times he even appeared at odds with his own campaign, which in the election’s final days released a gauzy ad aimed at suburban women.

Trump did not care for the soft-focus ad, which notably did not mention him, according to a person familiar with the president’s thinking who was not authorized to speak publicly. Instead he promoted a shocking, expletive-loaded video featuring a Latino man convicted of murdering two police officers, which was widely decried as being racist.

But while Trump’s plays to his most loyal supporters help rev up the crowds in small towns and rural areas in red states, they were viewed as a turnoff to moderates, independents and women in the suburban districts needed to keep the House in GOP hands. Still, Trump brushed off criticism that he was alienating moderate voters as he continued his massive rallies and overheated rhetoric.

“These rallies are the best thing we’ve done. I think that the rallies have really been the thing that’s caused this whole big fervor to start and to continue,” he told reporters on Sunday.

During the final stretch of the race, Trump tore across the country, holding 11 rallies over six days. On Monday, he blitzed through a trio of Midwest states he won in 2016 — Ohio, Indiana and Missouri — exhorting his supporters to help send Republicans to Capitol Hill to help safeguard his administration’s accomplishments and a booming economy.

“It’s all fragile. Everything I told you, it can be undone and changed by Democrats if they get in,” Trump told supporters during a telephone town-hall organized by his campaign before Air Force One took off for Cleveland. “You see how they’ve behaved. You see what’s happening with them. They’ve really become radicalized.”

Trump pointed to his boisterous rally crowds as proof that Republicans were surging at the right time, rejecting suggestions that Democrats entered Election Day with an edge in enthusiasm. He frequently invoked his upset win in 2016 and tried to recapture that energy in his final rallies, at times relegating the candidates he had traveled to endorse to supporting actors in the theater of a Trump rally.

And he plowed forward despite a spate of election-season violence that gripped the nation. He continued to hold events amid a mail bomb scare that targeted his political opponents and went forward with a rally hours after a gunman massacred 11 people in a Pittsburgh synagogue.

While Trump condemned violence and anti-Semitism, he bemoaned the fact that “two maniacs” had blunted GOP campaign “momentum.”

If Dems Win Tonight, House Leadership Could Have Touch of Gold