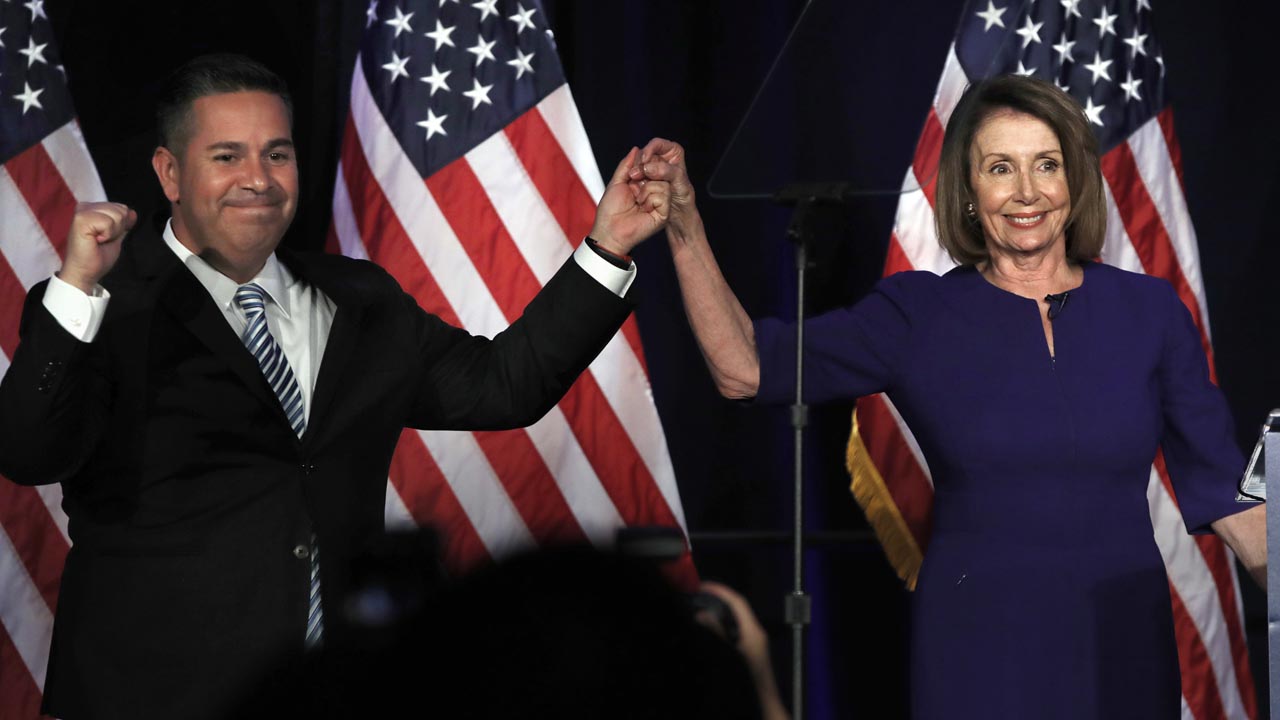 Nancy Pelosi is telling Democratic lawmakers and supporters that elections are about the future and “thank you all for making the future better for all of America’s children.”

Pelosi spoke as Democrats closed in on control of the House.

Pelosi said the election Tuesday was about more than Republicans and Democrats. It was about restoring the Constitution and providing a balance to the Trump administration.

She says the election is also about stopping what she described as the GOP’s attacks on entitlement programs and the Affordable Care Act. She says Democrats will find common ground when they can and stand their ground when necessary.

Democrats Are Moving Toward Control of the House

Democrats are moving toward control of the House. They’ve picked up moderate, suburban districts across the Northeast and Midwest as they get closer to the 23 seats they need to wrest control from Republicans.

Democrat Abby Finkenauer beat Blum and will be among the youngest women ever elected to the House. Democrat Cindy Axne beat Young, and Lauren Underwood, a 32-year-old African-American nurse, topped Hultgren.

Casten, a scientist and businessman, argued that Roskam was too conservative for a district that supported Hillary Clinton over President Donald Trump in 2016. Casten pointed to Roskam’s record of opposing abortion and his record of voting along with Trump.

Casten focused his campaign on health care and has called for stricter gun control laws.

Roskam insisted he’s a moderate who opposed Trump when necessary. He criticized Casten as wanting to raise taxes and for name-calling and “embracing the politics of ridicule.”

Crow, 39, is a former Army Ranger and captain who fought in Iraq. He then went to work at a politically-connected Denver law firm before taking on Coffman, who has survived repeated strong Democratic challenges in the diverse district.

Hillary Clinton won the district by nine points in 2016 while Coffman won it by eight.

Coffman is an Army and Marine veteran and is active on veterans’ issues. But Crow used his own military service to neutralize Coffman’s advantage. Crow also embraced the cause of gun control in a district that was home to the 2012 Aurora theater shooting that killed 12 and abuts Columbine High School, where two teen-aged gunmen killed 13 in 1999.

The 38-year-old activist, lawyer and political newcomer already garnered national attention as part of a crop of diverse Democratic candidates.

Yoder was endorsed by President Donald Trump, but the suburban Kansas City district voted for Democrat Hillary Clinton in 2016. The district is a mix of fast-growing bedroom communities, established suburbs and poorer city neighborhoods.

She’s a member of the Wisconsin-based Ho-Chunk Nation and was raised by a single mother who served in the Army and worked for the U.S. Postal Service.