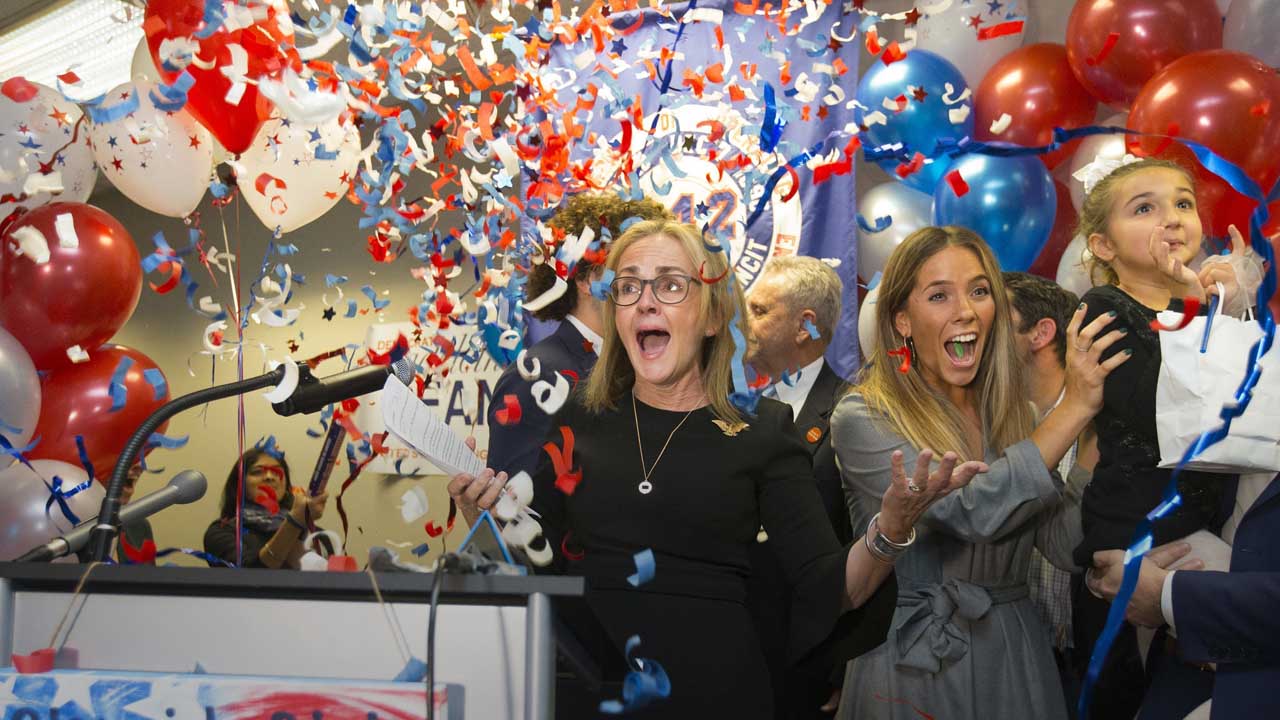 WASHINGTON (AP) — Democrats seized the House majority from President Donald Trump’s Republican Party on Tuesday in a suburban revolt that threatened what’s left of the president’s governing agenda. But the GOP gained ground in the Senate and preserved key governorships, beating back a “blue wave” that never fully materialized.

The mixed verdict in the first nationwide election of Trump’s young presidency underscored the limits of his hardline immigration rhetoric in America’s evolving political landscape, where college-educated voters in the nation’s suburbs rejected his warnings of a migrant “invasion.”

Still, a new Democratic House majority would end the Republican Party’s dominance in Washington for the final two years of Trump’s first term with major questions looming about health care, immigration and government spending. The president’s party will maintain control of the executive and judicial branches of U.S. government, in addition to the Senate, but Democrats suddenly have a foothold that gives them subpoena power to probe deep into Trump’s personal and professional missteps — and his long-withheld tax returns.

“Tomorrow will be a new day in America,” declared House Minority Leader Nancy Pelosi, who would be in line to become the next House speaker.

There were signs of extraordinary turnout in several states, including Georgia, where voters waited hours in the rain to vote in some cases, and in Nevada, where the last voters cast their ballots nearly three hours after polls were scheduled to close.

It could have been a much bigger night for Democrats, who suffered stinging losses with 2020 implications in Ohio and in Florida, where Trump-backed Republican Ron DeSantis ended Democrat Andrew Gillum’s bid to become the state’s first African-American governor.

“I want to encourage you to stick to the fight,” Gillum, thought to be a rising star with national ambitions, told dejected supporters.

Yet Democrats celebrated a handful of victories in their “blue wall” Midwestern states, electing or re-electing governors in Michigan, Pennsylvania, Minnesota and in Wisconsin, where Scott Walker was defeated by state education chief Tony Evers.

The results were more mixed deeper into Trump country.

In Kansas, Democrat Sharice Davids beat a GOP incumbent to become the first gay Native American woman elected to the House. But in Kentucky, one of the top Democratic recruits, retired Marine fighter pilot Amy McGrath, lost her bid to oust to three-term Rep. Andy Barr.

Trump sought to take credit for retaining the GOP’s Senate majority, even as the party’s foothold in the more competitive House battlefield appeared to be slipping.

“Tremendous success tonight. Thank you to all!” Trump tweeted.

History was working against the president in the Senate: 2002 was the only midterm election in the past three decades when the party holding the White House gained Senate seats.

Democrats’ dreams of the Senate majority, which was always unlikely, were shattered after losses in many of the top Senate battlegrounds: Indiana, Missouri, Tennessee, North Dakota and Texas.

Trump encouraged voters to view the 2018 midterms as a referendum on his leadership, pointing proudly to the surging economy at recent rallies.

Nearly 40 percent of voters cast their ballots to express opposition to the president, according to AP VoteCast, the national survey of the electorate, while one-in-four said they voted to express support for Trump.

Overall, 6 in 10 voters said the country was headed in the wrong direction, but roughly that same number described the national economy as excellent or good. Twenty-five percent described health care and immigration as the most important issues in the election.

Nearly two-thirds said Trump was a reason for their vote.

The president bet big on a xenophobic closing message, warning of an immigrant “invasion” that promised to spread violent crime and drugs across the nation. Several television networks, including the president’s favorite Fox News Channel, yanked a Trump campaign advertisement off the air on the eve of the election, determining that its portrayal of a murderous immigrant went too far.

One of Trump’s most vocal defenders on immigration, Kansas Secretary of State Kris Kobach, lost his bid for governor.

Kobach had built a national profile as an advocate of tough immigration policies and strict voter photo ID laws. He served as vice chairman of Trump’s now-defunct commission on voter fraud.

The president found partial success despite his current job approval, set at 40 percent by Gallup, the lowest at this point of any first-term president in the modern era. Both Barack Obama’s and Bill Clinton’s numbers were 5 points higher, and both suffered major midterm losses of 63 and 54 House seats respectively.

Democrats, whose very relevance in the Trump era depended on winning at least one chamber of Congress, were laser-focused on health care as they poured hundreds of millions of dollars onto surging anti-Trump energy to break up the GOP’s monopoly in Washington and state governments.

While Democratic losses were expected, particularly in the Senate, some hurt worse than others.

In Texas, Sen Ted Cruz staved off a tough challenge from Democrat Beto O’Rourke, whose record-smashing fundraising and celebrity have set off buzz he could be a credible 2020 White House contender.

Democrats’ fate in high-profile governorships in Georgia and Wisconsin were at risk as well.

Democratic Sens. Joe Manchin in West Virginia and Tammy Baldwin in Wisconsin won re-election. And in New Jersey, Democrats re-elected embattled Sen. Bob Menendez, who, less than a year ago, stood trial for federal corruption charges. The Justice Department dropped the charges after his trial ended in a hung jury.

Tuesday’s elections also tested the strength of a Trump-era political realignment defined by evolving divisions among voters by race, gender, and especially education.

Women voted considerably more in favor of their congressional Democratic candidate — with fewer than 4 in 10 voting for the Republican, according to VoteCast, a nationwide survey of more than 115,000 voters and about 20,000 nonvoters — conducted for The Associated Press by NORC at the University of Chicago.

In suburban areas where key House races were decided, voters skewed significantly toward Democrats by a nearly 10-point margin.

The races ushered in a series of firsts. Women had won 76 seats and were assured of nine more, a record.

The House was getting its first two Muslim women, Massachusetts elected its first black congresswoman, and Tennessee got its first female senator.

Georgia gubernatorial candidate Stacey Abrams, a Democrat, was in a fierce battle to become America’s first black female governor, though Democrats in Florida and Maryland lost their bids to become their states’ first black governors.